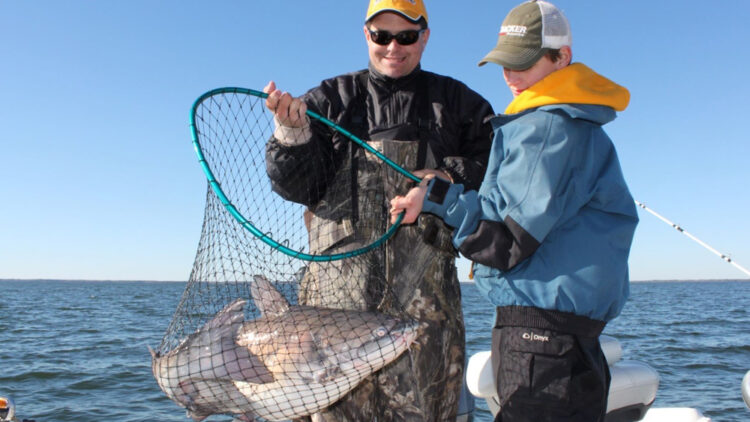 It’s not all about the catching, but it never hurts when the cats choose to do their part!

“Can we go fishing again next weekend?”

Those are words that parents who fish love to hear, and few things deliver greater reward than watching a catfishing interest grow into a passion.

That begins with early outings, and the way parents handle first fishing trips with children can have major impact on whether youngsters embrace the sport in the long haul. We’ve written previously about the actual types of catfishing trips that lend themselves best to early outings with young anglers and about specific strategies.

Here we’ll look past the fishing how-to and focus on other aspects of fishing trips that are likewise important for making kids want to return again and again and to truly hook them on fishing.

One of the simplest ways to get young anglers engaged is to make them part of the process. Involvement equates to ownership of some of the fun had by all, even if fish don’t bite, and that can be important.

It’s tempting to play the guide role to make things as simple as possible for everyone and to make sure things get done right. However, if kids are involved in tasks – even in little things like carrying gear, digging worms, and putting fish on a stringer – it creates a stake in the outing and tends to keep interest high.

Extend that beyond physical tasks, too. Let them pick a spot to try, even if it’s not the one you would have chosen, or seek their input on when it’s time to move to a new spot. Even involvement in small-seeming decisions like where to park or whether to add more weight to a line can make far more difference than you might expect.

One of the simplest and most effective ways to make a catfishing trip with your own child or children even better is to encourage them to invite friends.

Inviting friends serves double duty. First, your own children get to have a peer to learn with, laugh with, share the excitement of catches with and such. As importantly, often you’ll have the opportunity to introduce the fun of fishing to someone who comes from a non-fishing family or who simply doesn’t get many other opportunities to fish.

Once you’ve committed the day and set a plan, it really isn’t much harder to carry a couple of extra rods and tote along and extra youngster or two. You might stay busy untangling lines, baiting hooks and unhooking fish, but that’s not a bad thing if everyone is having fun.

And ideally, you’ll be teaching those tasks even as you perform them, again with an interest in getting everyone increasingly involved in the process as the day progresses.

Even if you are mostly a catch-and-release catfisherman and don’t always like to mess with keeping, cleaning and preparing fish, few things provide more of a sense of accomplishment for most young anglers than contributing to the family meal.

Returning to a previous point, this is a great opportunity to get youngsters involved in the process. Let one of them carry the stringer of fish with pride, get them involved in the fish cleaning process, and think together about whether you want to fry your catfish, bake them or cook them some other way. Then, as much as seems fitting by age, encourage them to help with the cooking and serving.

On the flipside, teaching the value of releasing some fish for someone else to catch another day has its own virtue. So, whether you keep fish or release them any given outing, take time to talk about why you are doing so.

As much as you want everyone to catch fish, remember that it’s not all about the fish and guard against transmitting your disappointment if the catfish don’t cooperate.

Be aware of your surroundings and things you can share and teach. Enjoy the boat ride or the time sitting on the lake shore, and actively take note of things like geese flying overhead, interesting cloud formations and minnows that are visible in the shallow water.

Along the same lines, planning a stop for your favorite sausage biscuits on the way to the water, toting a lunch to enjoy by the lake or swinging by a nearby fish hatchery to see zillions of tiny catfish that will eventually be stocked can significantly add to the total experience.

This one can be the most difficult, but it’s arguably the most important. If you want early experiences to be positive and for young anglers to want to keep returning, it’s critical to let go of how committed you think they should be to the fishing.

They might not want to stay as long as you would, and they might grow more interested in chasing grasshoppers, piling rocks or looking through things in your boat than watching rods or even catching fish – and that might even happen about the time you figure things out and the bite gets good!

Let them enjoy the outing in whatever way is most fun for them, and they’ll be far more likely to want to return next time and the next time, and eventually, the fishing itself will likely take over the interest department.