Fishing With Daughters and Granddaughters 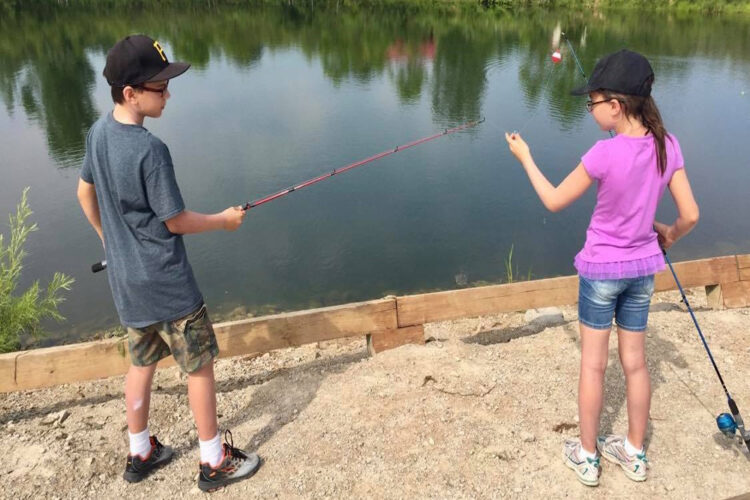 Teaching Young Girls to Fish—A Gift That Lasts a Lifetime

Young girls can learn and enjoy catfishing just as easily as boys.

Fishing has always been a great family sport. However, in times past when adults were seen fishing with children, it was often men fishing with boys. But in catfishing today more and more wives and daughters are becoming part of the sport.

Catfishing is not the most fashionable sport. It involves hard work, smelly bait, and plenty of slime, but young girls can learn and enjoy catfishing just as easily as boys. All they need is the opportunity.

Anietra Hamper, a self-professed outdoor girl, received the opportunity and encouragement to fish at an early age from her grandpa. As she followed the passion given to her by her grandpa she became an accomplished and award-winning travel writer/photographer and regular contributor to CatfishNOW.

“Fishing was just something we did as part of visiting my grandparents at their cottage,” offered Hamper. “I wish my grandpa could have known that the little gift of time he devoted to teaching me to fish and appreciate the nature around me would be a lifelong gift.”

Hamper’s early fishing experience was probably not the norm. However, there’s no reason similar behavior couldn’t be embraced more in today’s world of smartphones, apps, and screens. Many people think it would be a good idea.

“I do think my experience was out of the mainstream for sure,” suggested Hamper.  “Boys were groomed for sports and the outdoors and girls were groomed for playing with dolls and playing house with friends. I did both.”

“My grandpa taught me (and all of my cousins) to fish when I was a little girl,” continued Hamper. “I had two older brothers and we enjoyed fishing at the cottage together. Grandpa made me dig my own nightcrawlers from beneath logs after a good rain and I learned to properly handle the fish. I also helped grandpa clean the fish so we could have a fish fry but mostly I tossed the guts in a bucket.”

“I never learned words like ‘ewww’ and ‘yuck’ when it came to things like worms or bait,” joked Hamper. “My early fishing lessons instilled in me a lifelong love of the outdoors.”

Anietra Hamper’s fishing background as a youth has served her well in life and stands as an example of why parents and grandparents should teach their daughters and granddaughters, and/or any young girls, to fish. There are many more things to be learned than just the fishing.

“I would say that getting young girls involved in fishing accomplishes several valuable things,” instructed Hamper. “First, it gives them a reason to love the outdoors. It gives them a passion to enjoy that will follow them through their lives, and it engages them to learn about the species, the populations, and why they matter to the bigger picture of our environmental world.”

Hamper’s passion for catfishing came as she grew older and she observed the fish getting bigger. Her interest went from crappies to bass to carp and then catfish. Then, in what she describes as an innate desire to keep seeking the biggest fish out there, she planned a trip to Spain to pursue the wels catfish.

“Every angler fantasizes about the biggest fish they could ever catch,” explained Hamper. “And the little girl inside of me always dreamed of catching a fish bigger than me. That was the drive, to seek out the biggest catfish in the world. They are the wels and they grow astonishingly huge and are found in Europe.”

“I remember the night before I went fishing for the wels catfish in Spain,” recalled Hamper. “I actually felt emotional wishing my grandpa could somehow know how much his teaching me to fish as a little girl would weave throughout my life. I caught two wels catfish on that trip that were over 150 pounds and more than 7.5 feet long. I always dreamed of catching a fish bigger than me, and I did—twice.”

Hamper recognizes that learning to fish as a child developed a naturally curious imagination in her to wonder what else might await on the next fishing trip. Now she enjoys passing it on to others.

“I’m passionate about teaching little girls to fish—well, all kids really,” stated Hamper. “But girls especially, because it’s stereotypically a guy’s hobby and sport. I love it when people take a look at me and misjudge, thinking there’s no way I’d get slimy and stinky fishing—but the reality is girls can do both! For kids, digging in the dirt for worms is fun and little girls can realize that it’s just fine to have painted nails AND dig in the dirt!”

“For young girls, fishing and pulling in something like a catfish on your own is a rush of confidence that no simple compliment can compete with,” concluded Hamper. “The accomplishment is a testament to doing something on your own that is above and beyond the other benefits of fishing.”