Sharing a Message of Catfishing 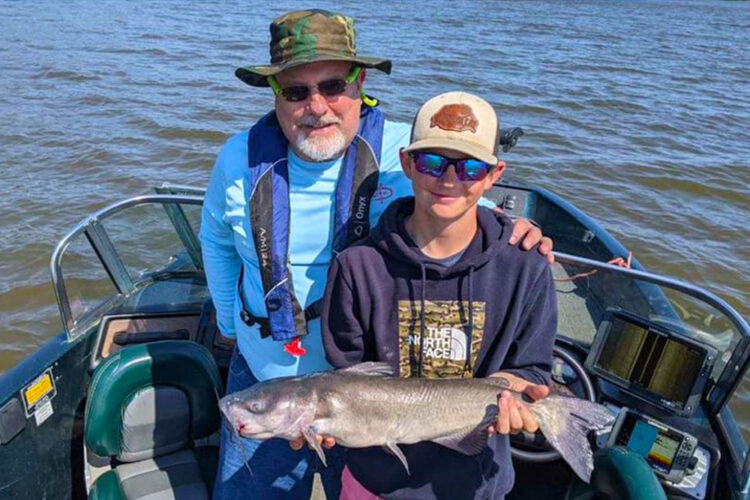 Hayden Gunther is shown here fishing with one of the veterans, Robert Ferrera, at the 2021 Fishing for Freedom event out of Quincy, Illinois.

That’s Why I’m Me

Hayden Gunther recognizes that catfishing will be with him for a lifetime.

Whether it’s tournament fishing with his dad, supporting veterans at Fishing for Freedom, or giving seminars at Catapalooza, Hayden Gunther has a passion for fishing. And those are just a few of the events this young man has been a part of at the ripe old age of sixteen.

The Abingdon, Illinois youth was introduced to fishing by his dad at a very early age. Later on, Hayden and his dad were introduced to catfishing together and they have grown in the sport together.

“I was probably five or six when I started fishing,” recalled Hayden. “I started bluegill fishing—fishing for small fish with dad. I was introduced to channel cats next, and then eventually to blues and flatheads. The biggest fish I’ve ever caught was a 35-pound blue.”

“Switching from small fish to channel cats started out as just something to do every other month,” continued Hayden. “Then we started to fish Alex Nagy’s Twisted Cat tournaments with Kyle Johnson and our catfishing took off from there. So dad and I were introduced to catfishing together. I started when he started and it’s really helped me bond with my family and get to know other people. Catfishing has introduced me to a lot of nice people.”

Hayden also willingly volunteered at the Twisted Cat tournaments. Everyone appreciates his efforts because you can never have too much help at a tournament.

“So when you go to tournaments it’s awesome,” Hayden said. “I didn’t fish the tournaments for the first couple of years but I helped with them. I still want to be a part of them and it’s awesome.”

As a volunteer, Hayden helped carry the fish back to the water following weigh-in. He developed an interest in fish care and the safe release of the fish. He enjoyed watching them swim away healthy.

“I don’t really keep any fish,” explained Hayden. “I fish for channel cats a lot but I don’t keep them. I want somebody else to enjoy the feeling I felt when I caught them. I don’t want to just keep that to myself. I want to make sure that every single fish swims away, then somebody else can enjoy catching that same fish on another day.”

In May of 2021, Hayden took his passion to the Catapalooza event in Pigeon Forge, TN. He loved it, mostly because of the new relationships he made. He was part of the Catapalooza for Kids portion of the fishing show.

The two-time Youth Angler of the Year on the Twisted Cat Outdoors trail was sponsored by Catfish Addiction, Chiller Bait Tanks, and Rippin Lips Fishing. He represented them by talking about why we fish, why it is important to release fish, and what a great experience fishing is.

“I did a seminar and talked to all the kids about fishing,” revealed Hayden. “The message was that fishing is more than a sport. It is something that you can always fall back on when things aren’t going right for you. Fishing is going to be there for you. It’s never going to leave. Fishing is something you can enjoy with anyone.”

Hayden was impressed greatly by what he witnessed at Catapalooza and other catfish gatherings he has attended. He liked the fact that the kids got introduced and recognized and he found other anglers that were willing to talk to him about the sport he loves.

“I’ve noticed that when I come to these events there so many people open to talking to you,” recalled Hayden. “They will tell you about stuff and they’re not just salesman wanting to sell you their rods or anything. They are real people that will tell you how to catch fish and it helps you enjoy the sport too.”

“I mean I’ve learned so much it takes days for me to explain,” he continued. “It’s just awesome to meet people that want to see other people catch fish. They give you information because they want to see you succeed. I have learned that there’s no need to try and be better than anybody else. You just be you and fish and enjoy it.”

In the final analysis, he loves fishing for the same reasons that most anglers do. The only difference is the impact that he says it has had on his young life.

“That feeling of you fighting the fish and bringing it to the boat is just awesome,” concluded Hayden. “It is something that I enjoy. I just love it and I can’t get enough of fishing. I think that because I was introduced to fishing at a very young age it has shaped me into the person that I am now. I mean I really think that’s why I’m me.”