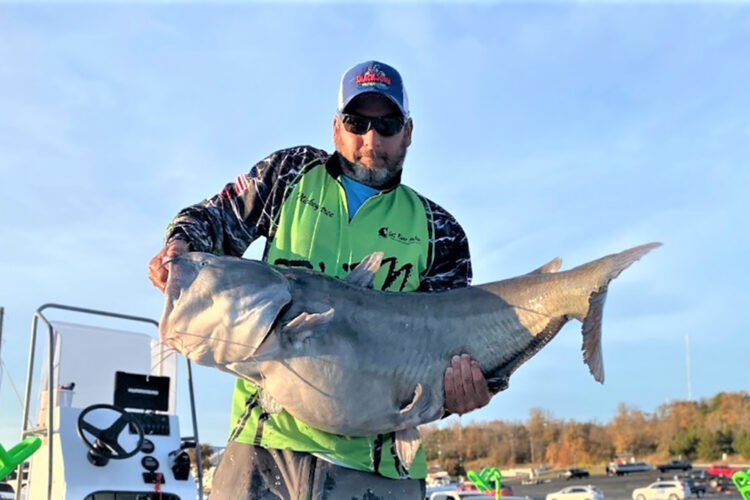 Adapting to a Life-Changing Passion

Making the transition from grasshoppers to skipjack was fueled by a passion for chasing big catfish.

Like so many passionate anglers before him, Mickey Petree caught the fishing fever from his grandfather. The memories and the lessons from those early days in Texas are with him yet today.

“My passion for fishing began at a very young age,” recalled Petree. “It was in the small town of Gunter Texas. I began fishing in small farm ponds with my Paw Paw. I remember using his ballcap to catch grasshoppers for bait as he baled hay.”

“As I became older and more independent I made friends with a group of fishermen,” recalled Petree. “We began lining the banks with surf rods every weekend. Many hours were spent on those shorelines from sunrise to sunset and many memories were made along the way.”

Petree remembers well when catfish fever set in for him. As you might expect it had something to do with a friend and a big fish. It was a 121.5-pound blue caught at Lake Texoma in Petree’s home state of Texas. At the time it was the world record blue catfish and is still the record blue in Texas.

“My life and my passion for the sport of catfishing all changed in a day,” declared Petree. “My good friend Cody Mullinex caught the former world record catfish which became known as Splash. He was fishing at the Hagerman National Wildlife Refuge on Lake Texoma on January 16th, 2004.”

“Seeing that monster of a fish changed everything for me,” added Petree. “I would never be the same.”

Shortly after that experience, Petree bought his first boat. A serious passion had set in and he knew that to up his game he needed to get off the bank and on the water.

“I decided that sitting on the banks waiting and hoping a good fish would be in that area wasn’t going to work,” explained Petree. “I had to figure out how to go find the fish. It was addictive, I couldn’t get enough of it.”

Like any serious catfish angler, the learning never stops. Petree made it a priority to learn about catfish behavior and what it takes to hunt them down and catch them.

“With each new body of water and each passing year there is something to learn,” Petree said. “Different experiences teach me about the habits of the trophy catfish I search for. I have developed many styles of fishing—from anchoring and bumping to pulling planer boards. I prefer to pull boards along channel edges, up and down humps, or across shallow flats. It all depends on the body of water and water temperature.”

Petree recalls an example of how he learned something about catfish behavior. It came on a cold wintery day, but one that was a little better than the day before.

“My best day of fishing came on a bright sunny day in the dead of winter,” recalled Petree. “It had been terribly cold and nasty for weeks. The water temperature was 38 degrees when we started but the day before the sun was shining. As the day progressed the water temperature rose to 40 degrees.”

Petree and his party were unable to catch any fish deep. While making a move they drove slowly across a shallow flat that was only 3 feet deep. In the process, they saw several big swirls and decided to give the shallows a try.

“We had the best day I have ever had,” confirmed Petree. “We caught around 20 fish between 30 and 50 pounds and 3 fish over 70 pounds. I learned that a few degrees change in the water temperature can make all the difference in the world.”

The lesson he learned that day, that big fish can be caught in shallow water in the dead of winter, serves him well today. He now shares with others that a few degrees increase in water temperature can turn on the bite in the shallow water. When he finds similar conditions he reverts to what he learned that day and it has produced success time and time again.

In 2002 Petree took his catfishing knowledge to the tournament trail where he made many new friends and many memories. One of those friends, and a big influence on his catfishing, was Larry Muse a well-known trophy catman.

“Larry Muse has always been my biggest influence,” acknowledged Petree. “Larry is a super great fisherman and has always been willing to help folks that are new to the sport. His knowledge of trophy catfishing and his willingness to share his expertise is inspirational.”

What he learned from Muse and other catfish anglers helped Petree compete on the tournament trail as he solidified his tournament skills. And now, he willingly shares his knowledge of catfishing with others.

“I love the competition of the tournament,” admitted Petree. “Tournament fishing puts the skills learned over the years to the test. Fishing tournaments on different bodies of water and at different times of year is challenging and it forces you to keep learning. As a bonus, you make lots of new friends and learn different styles of fishing.”

Petree’s close friends, who know him as Catdaddy Mick, recognize him as a very serious tournament angler. They also know his proclivity for catfish conservation. He makes every effort to take the best care of every fish he catches whether it is in a tournament or recreational fishing. He releases any fish that weighs more than 15 pounds. He places the responsibility of taking care of the fish on himself and his fellow anglers.

“The thrill of the rod bending and the suspense of the unknown monster on the other end of the line get my blood pumping,” confessed Petree. “I plan to keep fishing until either that feeling goes away or my body won’t allow me to do it anymore. I am 48 years young so the good Lord willing I will have many years left to chase the passion. I count down the days until my grandson is big enough for me to pass this passion down to him.”

“I have seen catfishing grow so much,” concluded Petree. “Now it is being noticed as a serious trophy sport. I hope to continue working with leaders in the industry to do my part in growing the sport to a new and higher level.”