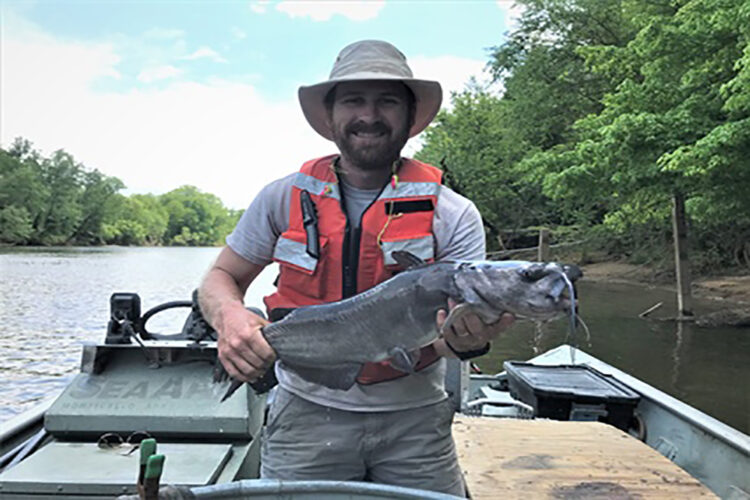 Pictured is District 4 Fisheries Biologist Kyle Rachels with a white catfish, which has been absent from rivers in southeastern North Carolina for several decades due to predation. (NCWRC Photo)

White catfish have been absent from rivers in southeastern North Carolina for several decades due to predation by nonnative flathead catfish. First stocked in 1965, flathead catfish were observed to readily consume native catfish species, including white catfish.

“Production efforts were extremely successful this year. We were able to stock significantly more white catfish fingerlings than we had anticipated into Holly Shelter Creek, Rice’s Creek and the South River,” said Watha State Fish Hatchery Superintendent Jeff Evans. “Although their maximum size is smaller than invasive catfish such as the blue and flathead catfish, they commonly reach 3 to 5 pounds, and the state record is 13 pounds.”

The stocked white catfish will likely take one to two years to reach catchable size and are protected by a 10 fish daily creel limit in combination with other bullhead species.

Biologists will continue to survey the areas to assess if stockings are successfully replenishing white catfish populations and adjust management plans as needed.

To learn more about white catfish and the Wildlife Commission’s stocking efforts in coastal rivers, contact Rachels at kyle.rachels@ncwildlife.org.

Epilogue: Hurricane Florence caused catastrophic damage in the Carolinas in September 2018. One of the results was widespread fish kills in southeastern North Carolina. Blue and flathead catfish were impacted greatly by resulting fish kills. Before that, the nonnative flatheads that had been stocked back in the 60s, had a devastating effect on North Carolina’s native white catfish.

“Blue and flathead catfish were impacted by those fish kills,” reported District 4 Fisheries Biologist Kyle Rachels. “Those kills may possibly relieve some predatory pressure (on the white catfish) for a few years.”

“That said,” continued Rachels, “there are still plenty of blue and flathead catfish in those systems and they’ll certainly predate heavily on white catfish as their populations recover. We’re interested to see if we observe white catfish at large in the stocked rivers in the coming years, how long they persist after stocking in the presence of blue and flathead catfish, and if anglers are able to catch/keep any.”