Why We Catfish: A Guest Editorial by Greg Staggs 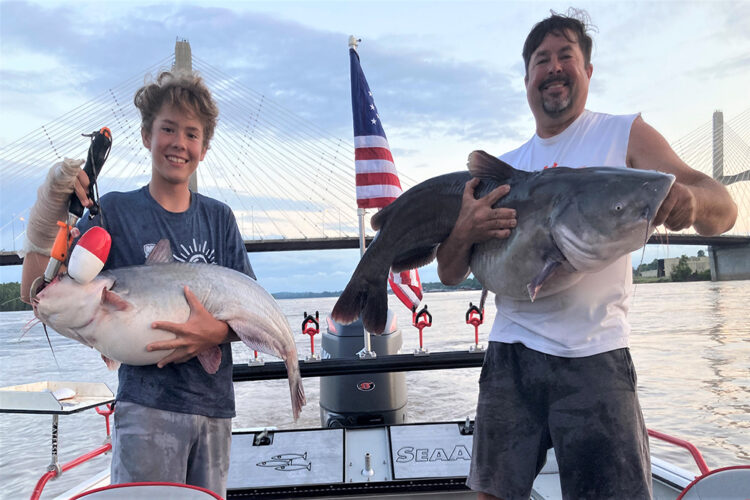 Catfishing success is easier when others share support and advice.

“I can’t believe you guys haven’t quit yet!”

I looked up at my oldest son who was standing in the doorway leading to our bedroom. I was lying on our bed after a long day of fishing the Cape Girardeau, MO leg of the Twisted Cat Outdoors tournament trail with my youngest son, Gabe. His older brother, Matthew, just couldn’t see the point in going out time and again and coming home empty-handed.

“You’ve been fishing for two years and basically still haven’t caught anything,” he followed up. “But we’re learning,” I explained to Matthew. “We’re SO much further ahead than we were this time last year. And besides, it’s just been one year.” He corrected himself without conceding his premise: “Two whole summers, basically.”

I offered up some futile resistance in the form of “Dad Advice 101”, but he was right: This WAS turning out to be tougher than I anticipated. I grew up traipsing around the ditches and creeks of the Missouri Bootheel, chasing after sub 5-pound largemouths that hid behind easily seen logs and trash piles, and most of our catches consisted of green sunfish or the occasional Warmouth on a Beetle Spin. I had spent a majority of my adult life living within 30 miles of the Mississippi River, and for the last 15 years I was literally 11 miles away from the closest boat ramp – yet I had never taken advantage of the world-class fishery that it is. We discussed buying a boat that would be river-worthy, yet allow us to have some family fun on nearby lakes, too. After a bit of research, we hooked up to a brand-new SeaArk EasyCat and pulled her home.

We had absolutely no clue what we were doing. None. We fished a local Grassroots event that Alex Nagy offered on his Twisted Cat trail, which allowed us to get our feet wet without investing too much. We were the only boat anchoring down, watching everyone else make drifts along a stretch of river and then powering back up to begin again. We were totally perplexed by what we saw.

We didn’t catch a fish that day, and we were in total awe of the monsters brought to the weigh-in. Gabe and I asked question after question of any angler who would give us time, and most of them did. We really didn’t know that we were rubbing elbows with catfish royalty that day. We even had a couple guys offer to jump on our boat with us and show us the ropes.

Fast-forward one year, and we were back at the Cape Girardeau event we got started at. We had caught a few fish in the ensuing months of that first exposure, and now we knew what bumping was, but we were still less than novices. Again, we struck out on tournament day. Even though we didn’t catch anything, it fired us up seeing all the behemoths brought in to the scales. We silently cheered on our friends we’d made in this short journey, and vowed to get better.

We headed back out the next night, determined. We’d been drifting an area a few times and I got hung up three separate times, forcing Gabe to power us back upstream to get unsnagged. We were in the right area. We moved a bit out toward the channel, and made a longer drift. Finally, after untold hours of bumping like the pros have shown us, it happened. Something sucked in my skipjack head and began moving off with it. I engaged the spool and reeled down and the fight was on.

Gabe began reeling his bait in to eliminate the chance of us tangling lines, but about three cranks into his retrieval he had a fish slam his bait; we were doubled up! Both fish were fighting like crazy, and every time I got mine close to the boat, he would just peel line off. We were so stoked, but now we had one small problem: Who was going to net our fish?

Gabe finally got his boat-side even as mine made another big run… I stuffed my rod handle in one of the rod holders on the Cat Rack and ran to retrieve the dip net in the front of the boat. Luckily, we made short work of the netting job and I was able to pick my pole back up and continue the fight.

A solid five minutes later, Gabe was able to slide the net under my fish and we had our first double; my arms were jelly. Nearly 70 pounds of catfish caught at the exact same time! My fish tipped the scales at just over 45, while Gabe’s came in at 24.5.

So why haven’t we quit yet? It was a great question, actually.

I’ve been hunting and fishing since I could literally crawl. During college, I picked up bowhunting and simply immersed myself in it. I’ve been running and gunning and hunting public land for the past 25 years – LONG before it was “the cool thing to do.” Over the years, I’ve worked closely with almost a dozen companies to help refine their product lines and market their goods and services, and I started writing frequently about bowhunting for national magazines. I’ve arrowed some monster bucks – all on public land.

I guess I was looking for a new challenge. The sheer size and power of 40+ lb catfish spoke to me. Knowing I could be chasing after them literally any day I wanted to within a 20-minute drive appealed to me immensely. And with less than 10 years left until I retire, I relish the chance to pursue them full-time once I leave corporate America behind. It’s also been fun letting my boys watch me tackle a new sport from the ground up. It’s easy to tell your kids how to overcome from the sidelines; SHOWING them how to learn, how to grind, how to struggle, personally, is probably one of the best things I’ll ever teach them. And on the rare (for now) occasion when we get to fight a monster into the boat? That’s icing on the cake.