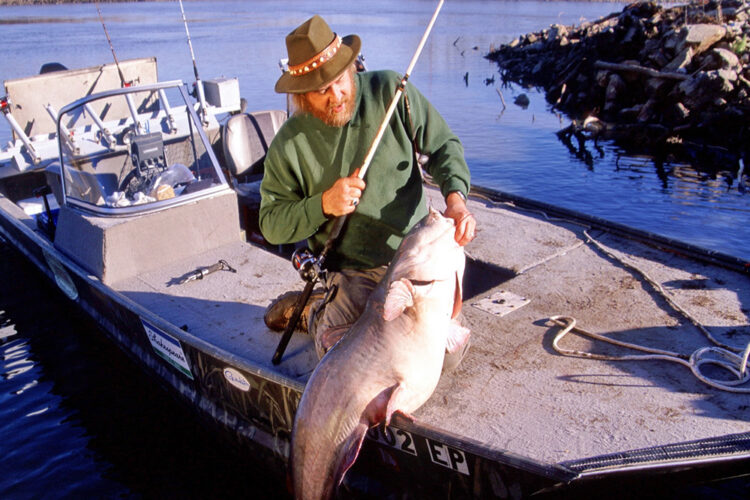 Despite misconceptions by many anglers, winter catfishing can be a very productive activity.

As I walk to the river bank, I shiver in the cold January air. The temperature is 40 degrees, but the wind chill is much lower.

Two months from now, this shore will be lined with anglers after white bass and saugers. But today, only two fishermen brave the chill air.

“Fish biting?” I ask the other guy when I arrive.

“See for yourself,” he says, nodding toward a stringer in the water.

I grab the stringer and pull it up. A 10-pound blue cat and six 3- to 5-pound channel cats thrash the water.

“Yep. The cats are stacked in here eatin’ ‘em.”

A few throws of my cast net, and a dozen shad crowd my bait bucket. I cut one into three pieces, thread the mid-section on my hook and cast toward the dam.

Winter catfishing can be a waiting game, but not today. The cats are in a feeding frenzy. As soon as my line tightens, a 2-pound channel cat nails the bait and is landed. On the second cast, I lose a sizeable fish. The third and fourth casts produce two more cats—a 6-pound blue and a 7-pound channel cat. In the same time, the gentleman next to me catches three more blues, including one pushing 20 pounds.

“I caught a blue on January 12th last year that weighed 57 pounds,” the elderly catman says. “And the year before that, I caught two over 40. Folks think summer catfishing is good. They should try it now. Winter fishing is the best there is.”

Many anglers think catfish don’t bite in winter, but that’s not true. Cats feed year-round just like crappie, walleyes, and bass. Play your cards right and you can find superb angling for trophy cats and eaters, too, throughout the coldest months. The key to success is knowing where, when and how to catch them.

Channel cats are common targets for ice fishermen up North. Despite popular misconceptions, they don’t lie in the mud and sulk when it’s cold. They’re active hunters even when lakes and rivers freeze.

Blue catfish also remain active throughout winter. They follow and eat shad, herring and other baitfish. Consequently, they’re more migratory than other cats and more frequently found in open water. That makes them tough to pinpoint at times, but peg a school this season, and you can enjoy fish-a-minute fun that may produce some giants.

I rarely fish at night in winter because daylight hours seem more productive. In my experience, the best days are clear and sunny. Cold cats are more active then, and success rates soar. When it’s cloudy, catfish are more prone to inactivity.

Windy days often are better, too, particularly when fishing shallow-water sites such as mussel beds. A stiff breeze stirs the bottom, moving food. And catfish aren’t as spooky around boats as they are when it’s calm.

Remember this, though: winter cats are caught under all weather conditions, day and night. The best catches often come when weather is worst, but only if you’re prepared for the cold and tough enough to stick it out.

Don’t fish one spot too long. Winter catfishing, done right, should be more like bass fishing. The angler casts to a good-looking spot and hopes for a strike. But if a bite doesn’t come soon, he keeps moving, trying one area and then another. Some stretches of water won’t yield a single fish, but others will produce a hefty cat on nearly every cast.

Among the best winter catfishing areas are bottom ledges created by creek and river channels. Pinpoint them using a depthfinder that will zero in on steep, easily identifiable ledges as well as shorter, less-distinct drops. Both are catfish magnets, and in winter, you’re likely to chart dozens of fish concentrated near each structural features.

Catfish gather near ledge features such as points, humps, snags, boulders and pockets. For trophy cats, focus your efforts on those features in deeper water at the base of channel ledges and the outside turns of channel bends, locations where two channels intersect and steep ledges in dam tailwaters.

Freshwater mussels are irresistible to winter blue cats. Mussels live in bottom colonies called beds, each containing thousands of these mollusks. Cats in cold water visit the beds repeatedly because they can fill their bellies repeatedly with little effort.

To find mussel beds, search near shore in 3 to 6 feet of water. They can be pinpointed by sight and marked during low-water periods, or find them by moving parallel to shore and probing the bottom with a cane pole. The shells produce a distinctive crunching sound when the pole hits them.

Mussels aren’t required baits. You can catch blues here using a bottom rig baited with hot dog chunks or cut-bait. Cast to likely spots and allow the rig to sit up to 15 minutes. If you don’t get a bite, move and try again.

Extended cold periods cause shad die-offs in many waters. These baitfish, catfish favorites, become cold-stressed when water temperature drops to 50 degrees and die when it dips below 45. The dead and dying baitfish attract enormous concentrations of hungry catfish, and may do so for weeks.

When the temperature is right and this happens, use a fish-finder to locate a shad school, then throw a cast net over the school to collect your bait. Smaller shad, an inch or two long, seem to work best. Hook two or three on a single hook, running the hook through the eyes and leaving the barb exposed. Then lower your rig to the bottom and reel it up a foot.

Now stick your pole in a rod holder and have a cup of coffee. If you’ve played your cards right, and ol’ whiskerface is down there, you’ll know it soon enough. And maybe you’ll be having catfish chowder for your next belly-warming dinner!