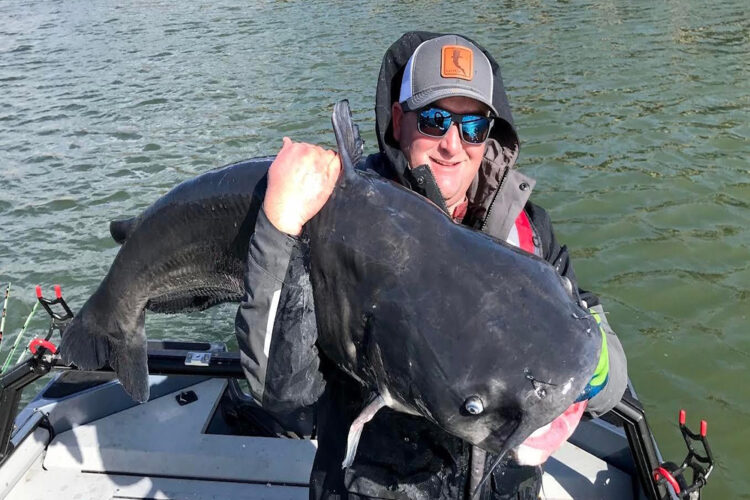 Cold water changes the fish’s behavior, but that’s not necessarily bad. Learn to use winter conditions to your advantage.

Catfishing was once thought of as a warm-weather sport, only suited for summer days and especially summer nights. That mindset has evolved, and many anglers know that opportunities exist throughout the year in many locales. Still, the virtues of wintertime catfishing remain underutilized.

Ironically, the very fact that winter will likely always remain the least popular time to be on the water is one of Chris Souders’ favorite things about catfishing this time of year.

“For me, fishing in the winter is nice because there are so few anglers on the water,” said Souders, who operates Slunger Cat Outdoors, which includes a highly popular YouTube channel, catfishing academy that customizes teaching to an anglers’ needs, and a guide service.

Souders lives in Southern Ohio, where winter significantly impacts the catfish’s behavior but does not shut down the fishing. That means he can find good fishing but must account for changes in the fish’s locations and likely behavior and adjust his approaches accordingly.

One negative is that winter essentially knocks flatheads out of the catfishing equation in most areas. Flathead catfish turn fairly dormant when the water gets cold. You might still catch an occasional flathead. However, targeted flathead fishing really isn’t viable in most waters through the middle of winter.

Souders finds good opportunities to catch both blue catfish and channel catfish during winter and spends time fishing for both. These species are affected similarly by cooling water temperatures, allowing for similar seasonal adjustments. Species targeted depend primarily on waters fished any given days, and in many areas, he catches both species together.

An important potential advantage of winter catfishing is that the playing field is shortened. Catfish find far less habitat to their likings, so they tend to congregate in predictable areas. Of course, you have to know the right type of areas, or the same factor becomes a disadvantage because a lot of waters that produce at other times are void of catfish this time of year.

When fishing near home, Souders focuses on seams between currents, breaks down into holes and areas of slower current, with ideal spots combining the best bottom contours and the right amount of current.

Of course, Souders doesn’t always fish at home. Video shoots, tournaments, and other catfishing ventures have led him to many different bodies of water. Farther south, he might also look for catfish on flats and in the river channels.

“Look” is a keyword during winter, when the fish are less widespread. It’s important to search likely areas with electronics and to locate fish before setting up and putting baits in the water. The fish aren’t moving a lot, and they don’t always bite immediately, so it’s critical to put baits among them.

Again, because the fish tend to hold in place and don’t always bite as readily during winter, Souders favors a stationary approach this time of year. In Southern waters, he might go more aggressive, dragging baits along the bottom, but his go-to approach through winter is to put baits among the cats.

After locating fish, Souders will anchor just upstream of a good concentration of cats and cast bottom lines, often using 3-way rigs to keep baits just off the bottom and in front of the most active fish. When the bite is tough, he’ll use a double Kentucky rig, which included two hooks on dropper loops, each staggered a couple of feet above the weight. That keeps baits near the bottom but staggers them at two different depths.

Souders noted that it’s important to match prevalent baitfish with cut bait, when possible. He’ll start with big chunks of bait if blue cats are in an area but will experiment with smaller pieces of the same bait if the bite is tough.

Current and weather patterns can significantly impact winter catfishing, so Souders pays careful attention to both.

Even with high flows, fish will be in areas where water is moving but the flow is moderated, but the actual spots will change when winter storms bring high water. Extra-low water will tend to make the fish fussier, calling for smaller baits and extra patience.

Regarding weather, the pattern over a few days typically has at least as much impact on the fish’s locations and behavior as the weather while you are fishing. A string of blustery days and cold nights will push the catfish extra hard into winter patterns, but a warming trend can have the opposite effect.

“If you get a string of warm days in a row, it’s important to look in shallow water,” Souders noted. “The shallows warm faster in the sun, and catfish will move up into the warmer water.”

The biggest downside of winter catfishing in Souders’ mind is that problems that occur can become dangerous quickly with always-cold water and often-cold air. On milder winter days, especially, it’s easy to forget how cold the water really is and how dangerous that can be. When the winter weather is extra harsh the air itself carries legitimate danger if anglers are not properly dressed and hydrated.

These concerns don’t keep Souders off the water. They simply necessitate even greater than normal caution, including paying extra careful attention and wearing life jackets, and demand more careful preparation for a day on the water.

Weight: 6 to 12 ounces, dependent on current and depth