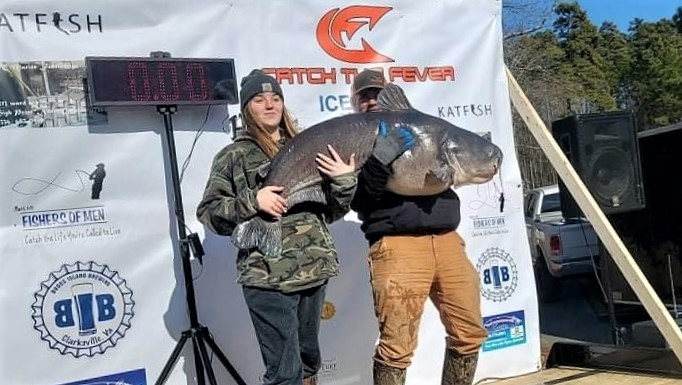 The weather was cold and windy but that’s no reason to quit!

The January 29, 2022, Icebowl Catfish Tournament on Kerr Lake (Buggs Island) lived up to its name. Anglers were faced with low temperatures and windy conditions that made it uncomfortable and tough fishing. Many of the 126 registered teams put their boats in the water during the wee hours of the morning and were challenged immediately by the weather. They knew immediately why it’s called the Icebowl!

The tournament is open to all anglers, but it includes a battle for bragging rights between North Carolina and Virginia on the lake that is in both states. The tournament winner is crowned based on the largest fish caught and weighed on tournament day. 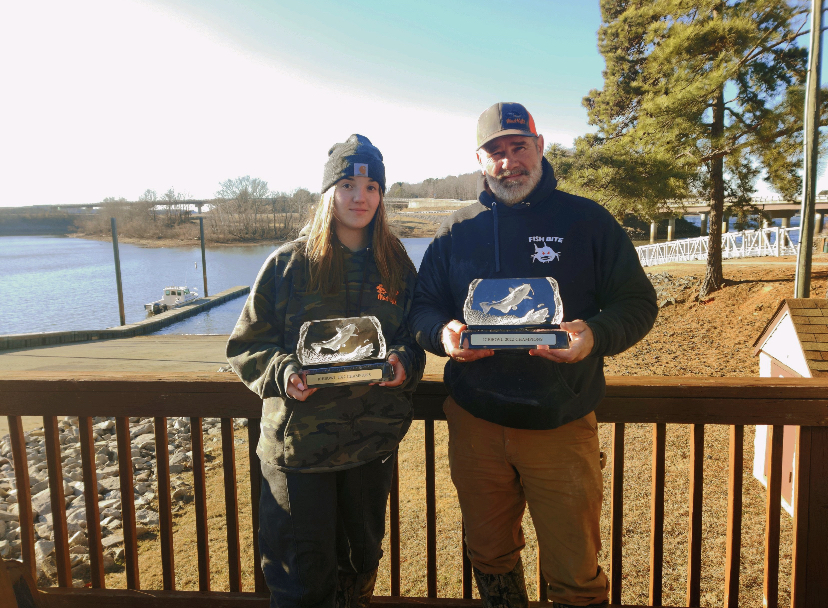 This year’s tournament winner came from North Carolina. Bill “Flathead” Sutton was fishing with his daughter, Georgia, as Team Cat Baby. They were among the anglers launching early in the morning.

“It was a cold 30 mph wind, snowing, with a wind chill in the teens,” recalled Sutton. “We put the boat in around 3:00 to 3:30 AM and navigated to a spot that was tucked in behind an island out of the wind.”

Fishing began at 6:00 AM, so the two Suttons set in their enclosed cabin with a heater that made it comfortable as they prepared for the competition. The huge livewell that they had placed on the boat limited the space they had and made it a little crowded but Sutton is a big believer in good fish care. 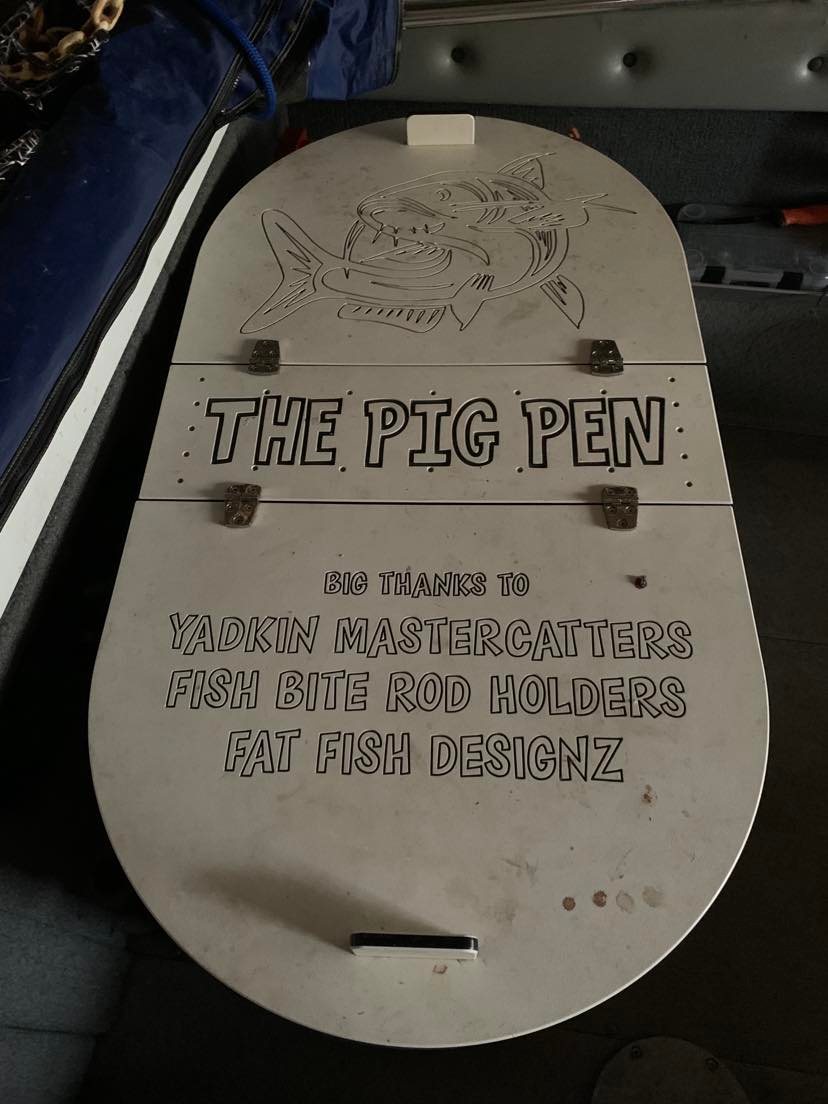 “We had marked and caught fish before on the first spot we picked,” explained Sutton. “Our bait consisted of a 10-pound carp and some nice 14-inch and bigger shad. I used the massive head and one huge body piece of the carp and the big shad at the first spot.”

Team Cat Baby sat on that spot for 4 hours with no bites. Although it was more comfortable using the windbreak, they decided to move out into the wind. After doing a little scanning they found a few fish to set up on.

They set out the anchors only to realize that they were not holding in the wind. During the process of pulling the anchors so they could reset them, Sutton heard his daughter speaking to him.

Bill and Georgia re-anchored, baited up and threw all the rods out with only a couple of hours left to fish. After a few minutes, with the boat swinging back and forth they finally get their first bite. They caught a 10 pounder.

“We threw the same rod back out with the smallest piece of shad we had,” said Sutton. “I sat down to wait on a bite. It wasn’t 10 minutes and we got a pull-down. I pick up the rod and fought the fish to the boat.”

Sutton sensed that it was a good fish as he handed the rod to Georgia and said, “It’s a big fish baby!”

After another 10 minutes of fighting at the boat, Georgia brings the fish to the surface. Sutton was standing ready and scooped him into the net.

“I tried to get the fish in the boat and realize it wasn’t going to happen by myself,” continued Sutton. “So my daughter grabs one side of the net and I grab the other. We pulled as hard as we could and hooked the net on the rod holders. We reached down again, got another grab on the net, and roll the fish into the boat.”

Team Baby Cat took a moment to celebrate, reeled up, and headed to the scales with a 112.54 pound Kerr Lake blue catfish.

“To get the fish out of the boat and to the scales, it took 6 grown men,” concluded Sutton. “I am on cloud 9 about being in the 100 Pounder Club and as an American Catfishing Association (ACA) member I will submit the needed information to be recognized on their website. More than anything, I thank God for the success and the lesson that was included in our adventure. After we released the fish I looked and my daughter and said, God, sent that fish to us to prove to you that you Never, Give Up!”

Final Thoughts
Tournament Director Michael Lawrence thanked Casey Campbell and the rest of the Icebowl crew for their support.

“They have been right there with me,” offered Lawrence. “Everything from helping on tournament weekend to helping with the sponsors they have contributed to building this event up to where it’s at. Their efforts continue to make it better. I can’t thank those folks enough!”

The battle between VA and NC was close. When all the weights were recorded the VA team had about 560 pounds and NC had about 615. pounds.

“That 112-pounder was the real kicker in that battle,” concluded Lawrence. “Without it, the results would have been real close!”

Sutton, who is a strong supporter of catfish conservation mentioned his livewell and noted the importance of having an adequate one. He uses a simple oval cattle trough with a lid made by Eric Simmons of Fatfish Designz.

“I think it’s a 100-gallon tank,” Sutton said. “I don’t think that fish would have been so healthy without it. That fish swam off like a champ.”