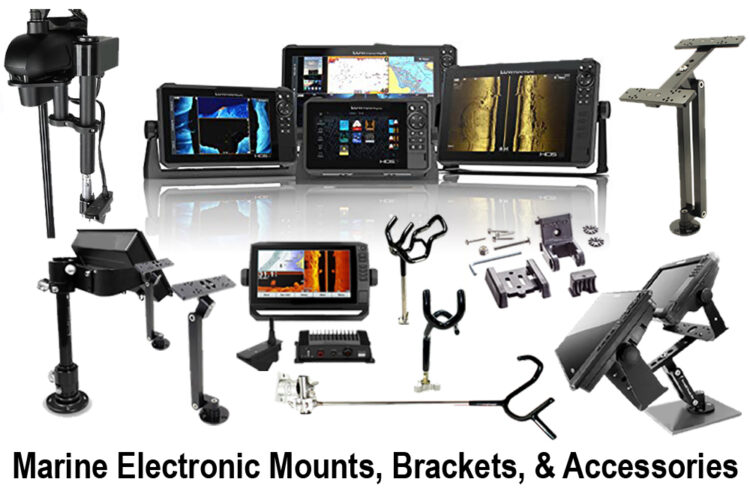 Notice that all of the transducers use a unit of measurement referred to as frequency. Frequency is the number of cycles per second. So one kilohertz would be equal to 1,000 Hertz or 1,000 cycles per second. A 50kHz has a wide sound wave covering a larger area while the 200kHz a short, tight sound wave pulse covering a smaller area. What degree cone angle will also influence the MFD imaging.

Traditional 2D sonar is operates in lower frequencies from 50-, 83-, to 200-kHz. Use the lower to see more with less definition and higher 200kHz for a smaller area, but better definition.

CHIRP Traditional 2D Sonar produces a continuous sweep of set frequencies from the transducer and waits for the sound wave pulse to reflect back from objects, wood, rock or fish to produce images. MFD with the correct transducer may have medium and high CHIRP frequencies. A lower frequency medium CHIRP covers a large area compared to the sharper imaging, narrow high CHIRP.

Down or side scanning sonar MFDs have a large rectangular transducer that produces super thin, high ultra frequency beam. The lower 455kHz frequency allows and angler to see more, but with less definition than 800kHz or now the popular 1.2MHz frequency. Although the higher 1.2MHz produces super sharp images it’s come for the imaging to deteriorate in deep water. Side scan may reach out to 400 feet to the left and right of the boat. To produce images in down or side scan the boat must be moving forward unlike phased array canning sonar.

Garmin (LiveScope), Lowrance (ActiveTarget) and Humminbird (MEGA Live) now produce MFDs that utilize phased array scanning sonar. Garmin LiveScope has the broadest frequency at 530- to 1,100kHz. Lowrance has the next largest at 550-to 1,100kHz. Humminbird only list it’s frequency at 1,950-kHz.

Assuming from the frequency numbers Garmin will have the best imaging followed by Lowrance than Hummingbird. There is another factor and that’s the fact these transducers are steerable beams, but again are different sizes. Garmin has the widest beam at 20 degrees by 135 degrees while the Lowrance is 18 degrees by 135. Humminbird falls out of competition at 20 degrees by 120. What that means is Garmin is showing almost 2 feet more in imaging at a range of 50 foot resulting in a insignificant factor. Note the wider 20 degree Garmin LiveScope beam allows anglers to see more at shorter distances, however, the Lowrance ActiveTarget better imaging at distances farther out.

3D sonar is normally not used in crappie fishing, but produces a three-dimensional view.

(From Springdale, Arkansas, Brad Wiegmann is a professional photographer, videographer and outdoor writer published in dozens of print and electronic media outlets all across the nation. He is also a well-known guide, podcaster and social media influencer. Learn more about Wiegmann and his lengthy experience and expertise at BradWiegmann.com.)