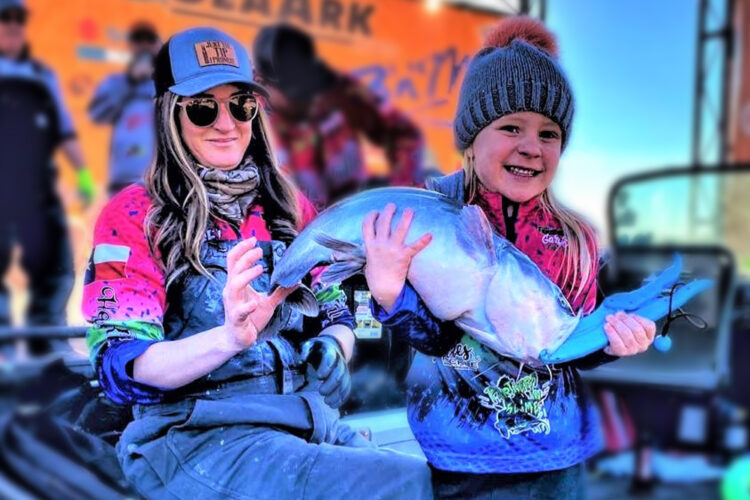 Tournament fishing becomes a way of life for many families in the catfish community. Shay and Courtney McDonald are prime examples of parents that include their child in tournament fishing. They made her a part of their passion for fishing at an early age.

“Stevi has been interested in fishing and fish in general since she was in diapers,” exclaimed Courtney. “My husband would take her on bait runs before his guide trips or a tournament, and it was her job to pick the shad up and put them in cooler.”

Stevi immediately took to the task and claimed it for her own. When dad tried to help she wouldn’t let him, saying, “No, I will get them.”

Stevi started fishing small tournaments here and there with Shay and Courtney when she was 3-years-old. In the last year or so she started doing better and earned the privilege to travel with mom and dad to the larger tournaments.

“She has already fished tournaments in 3 states,” enumerated Courtney. “Now she really looks forward to it every time. She calls herself the ‘fisher girl’. We soon learned that when Stevi was with us we had to take extra bait along because she played with the baits like they were her Barbie pets.”

Stevi’s duties soon grew as she learned the catfishing game was a catch-and-release adventure. Now she wants to be involved with the release. If it is a small  fish she can throw them back herself. If it is a big one she kisses them on the head and says, “Bye fishy, see you later.”

“Her personal best is a 34-pound blue cat,” indicated Courtney. “That’s not counting the ones we have helped her with. On her PB, the rod went down and we told her to get it. She fought it the whole way to the boat with the rod in rod holder. Then when she got it to the boat she wanted to help Shay net it.” (Click here for video)

Like most tournament anglers, Stevi loves the camaraderie as much as the fishing. She enjoys looking at all the boats that drive by and knows who a few of them are. Blake and Joe stringer or Chris, Kylie and Kamber Baldwin are sure to get a response.

“When she recognizes someone drive by she reacts by calling them by name,” explained Courtney. “She says, ‘Mommy look, there is Blake” or ‘look Mommy, there is Kyli and Kamber.’”

“She is usually a jabber box,” joked Courtney. “The list of things she says is endless. On day 2 at the CatMasters’ Possum Kingdom tournament we were struggling to stay in 2nd place. We knew we needed a fair bag. We had a really good takedown and as Shay reeled down on it Stevi was right there with him. As soon as Shay caught up to the fish he said, ‘got him.’”

Almost immediately the line went slack and the fish spit the hook. Shay said, “Dang it he got off.”

“Stevi’s response was instant,” recalled Courtney. “She said, ‘Daddy your supposed to catch the fish.’ The look on Shays face was priceless and I couldn’t keep from laughing.”

Even when she isn’t the one catching the fish Stevi is still excited to net the fish. At the tournament in Milford, KS she got a great lesson in conservation.

“She loved the fact that she had to measure each fish we caught,” said Courtney. Milford is a slot limit lake. She learned that if it wasn’t under 25 inches or over 40 inches we had to let them go.

“There was one time that we hooked into a double,” recalled Courtney. “Shay and I were both fighting fish. When shay got his in the boat, he took the hook out of its mouth, set it on the floor, and grabbed the net to help land my fish.”

As Shay and Courtney worked to land the second fish, they heard a familiar voice say, “Nope, can’t keep this one. He’s over 25 inches.” Stevi had already used the Parks Enterprises measuring stick to determine that the fish was 27 inches long. Not a keeper.

“There isn’t much about fishing she doesn’t like,” explained Courtney. “When she  gets tired she will just lay in the floor and take a nap or watch her iPad. She wakes up if she hears us catching a fish and then she is right in the middle of the action.”

Stevi also loves her 5 minutes of fame at the weigh-in and the other folks enjoy seeing her there. She comes to the weigh-in ready to perform by holding her fish for a photo and listening to her name on the loud speaker. She truly seems to love the attention.

“She’s always asking questions about different things on the boat,” concluded Courtney. “She might ask a question about the things we are doing or ask something about the fish. We are very proud of her determination to become one the best female anglers of her generation.”