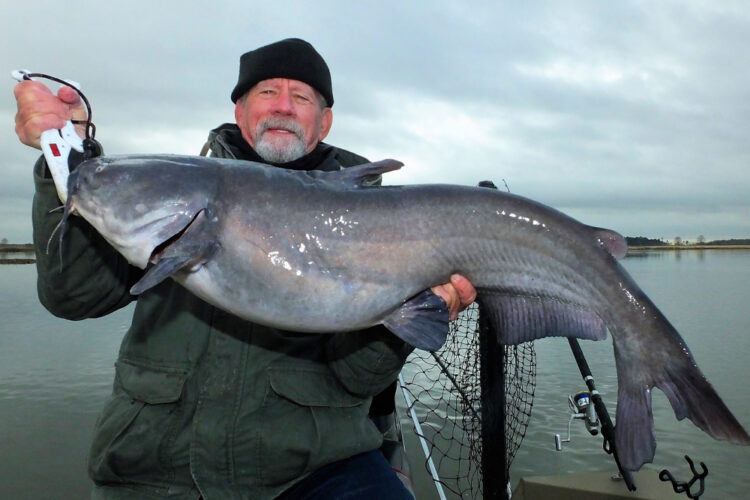 Lonnie East bundles up for the cold weather and hits the Cooper River in South Carolina for trophy blues like this.

Catfishing on the Cooper River

The Cooper River in South Carolina is located directly downstream from the Santee Cooper lakes and provides excellent winter catfishing for trophy blue and flathead catfish.

The Cooper River in South Carolina is a catfish hotspot that’s productive year-round but offers prime fishing action in February and March. This river begins in Moncks Corner in the tailwaters below the Pinopolis Dam impounding Lake Moultrie of the Santee Cooper lakes system.

The Cooper River winds toward the coast where it merges with the Wando and Ashley rivers in Charleston that flow into the Atlantic Ocean. The river, and the fishing patterns, are heavily affected by tidal influences.

The Cooper River doesn’t take a backseat to the catfishing found on the famed Santee Cooper lakes upstream. It’s a unique and extremely productive resource for blue, flatheads, and channel catfish. The blues and flatheads are consistently caught in huge sizes with triple-digit blues having been weighed.

Lonnie East is a 75-year-old angler with 66 years of fishing experience on the Cooper River and much of that effort has been targeting catfish in cold weather.

“I’ve spent an enormous time studying and learning the river and identifying seasonal patterns of these catfish,” he said. “A lot of fishermen wait on the spring fishing to turn on in later in the year and that fishing is outstanding. But I’m fishing for the same big fish during the winter and the bite is excellent.”

East fishes from a 14-foot johnboat. He says he earned the moniker as a “River Rat” from the decades he’s spent on the Cooper River.

“I began fishing the Cooper River in the 1950s with my dad and have fished it continuously since,” East said.

According to East, the key to big catfish any time of the year is dictated by food, and that in turn is strongly dictated by the tides and river level.

“Long ago the Cooper River was an active commercial waterway with abundant rice fields along the river,” explained East. “These areas had ditches, or what I call brakes, where small man-made structures allowed water to flood in or be drained as needed to grow crops. Now abandoned in terms of water control, these breaks in and out of the flats are keys to wintertime fishing success because multiple types of forage utilize these spots to get into shallow water on rising tides and the catfish follow.”

East learned to identify these areas without the use of a depth finder, initially using a weight on a string to find these targets. On a trip with East in a boat equipped with modern sonar, he correctly described every place we fished in detail before we arrived and verified it on the graph.

East doesn’t need electronics, but without a ‘river rat’ in the boat, most anglers will need graphs to locate these targets.

“Understanding where and why eddies form and how they change with tidal flow and river level enables me to pinpoint targets,” he said. “Fishing success is not random, it’s a specific-target-oriented pattern.”

East explained that catfish stage on the shallower breaks and cuts along the main river channel. Specific spots include not only the breaks off the river leading into the old rice fields but also creek and river junctions and river bends with deep holes.

“Areas where different water flows merge create eddy currents and this creates prime feeding,” he said. “The correct setups are different based on the tide and water level. Catfish are in these places to feed and that’s a big advantage for the fisherman.”

East said on a rising tide catfish will migrate thru the breaks or up creek channels back into the shallow areas to forage. That’s a large target to pinpoint so he concentrates his efforts at the ingress and egress locations.

“I’ll work the edges of the main Cooper River where the access to shallower water occurs,” offered East. “I’ll anchor shallow on the ledges as the incoming tides flood the old rice fields, or up feeder creeks. I can effectively fish the edge and around the openings for fish moving shallower to feed. On the dropping tide, I’ll anchor in deeper water and cast to the breaks as catfish migrate out. The low tide period is a great time to anchor and fish the deep holes in the river.”

The Cooper River offers a variety of food sources.

“Threadfin and gizzard shad, along with mullet are abundant,” according to East. “And the saltwater shad and herring spawning runs during the late winter and spring provide additional food sources.”

His favorite bait is the big American shad that he catches with rod and reel as they’re migrating up this and other coastal rivers to spawn. He prefers big chunks of bloody cut bait to target big catfish and he’s a big believer in keeping fresh bait on the hook.

East uses standard spinning and baitcasting tackle with 7- and 7-1/2-foot rods spooled with 30- to 50-pound test monofilament line. He uses an 18- to 24-inch leader and a sinker from one to two ounces depending on current flow and depth. He fishes multiple rods in holders and one he hand-holds to add a ‘personal’ touch.

“The river has lots of huge catfish and catfish in the 20- to 30-pound class are realistic on any given trip. And 40- to 50-pound fish are always a possibility,” he said. “But much bigger fish are roaming this river.”

For East, the challenge of successfully fishing the river is adapting to the never-ending changes that occur with tides, water level, and the diversity of forage.

“I’ll move my fishing location often because I’m targeting actively feeding fish,” instructed East. “When I’m on the right spot catfish usually bite quickly so I seldom linger longer than 30 minutes. Some moves may only be 30 yards to a different eddy or the opposite side of a break, but other moves may be miles up or down the river. I love the process of hunting these big catfish and the Cooper River consistently rewards fishermen with trophy catfish.”