Why We Catfish: A Guest Editorial by Brandon Sasser 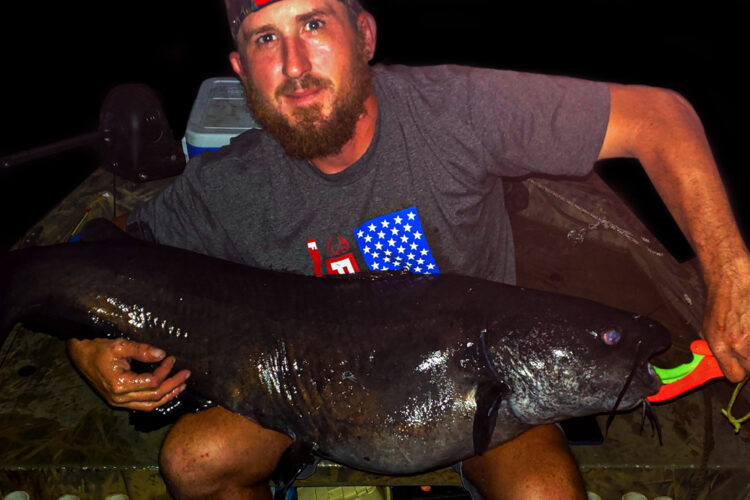 Bonding over the love of the outdoors and the sport of catfishing produces memories for life.

I was raised in a very small town known as Westville in Holmes County, Florida. If you can call it a “town?” It is more like a bunch of backroads and one small gas station. My dad began taking me fishing in a slough, called ‘Old Creek’ off the Choctawhatchee River at the age of two. Old Creek ran right through my family’s farm and my dad and I would walk through the woods to fish for bream, small channels, and blues.

In my pre-teen years, my great uncle took me under his wing and taught me all he knew about catfishing on bush hooks. I became interested in fishing for cats with rod and reels after having experiencing the adrenaline flow from the fight of a cat coming out of the water when I would lift up the bush hook.

I began to challenge myself by transitioning from one way of fishing to another. I studied the patterns of when the fish would bite, moon phases, how the water rose and fell, and how all this would affect their activity. I loved every minute of it.

Once I became a father, I did just as my dad did with me. I began to take my daughter, Paisley, fishing with me when she became two years old. Seeing her face light up as she reeled in a small catfish is one of the best things a dad could ask for.

My son, Blake, is just a year younger than Paisley. He started riding in the boat with me and Paisley catching bream for bait. Blake took to fishing so much that it was like seeing myself in the mirror.

Blake was four years old when he caught his first big flathead (36.9 lbs), in 2016. I was holding the rod and Blake was reeling. After landing the fish and seeing the light in his eyes and the smile on his face, I knew this boy was hooked (no pun intended).

My kids and I started fishing local tournaments and loved the atmosphere of meeting new people that shared our love of catfishing.

The catfishing community is such a great group of people. M&J Catfish War Tournament Trail accepted my kids and I in with open arms. Even though we were all competing, everyone was willing to share their knowledge of the sport and give a helping hand. They are a perfect example of what great sportsmanship is all about.

Our skills improved each time Blake and I fished a tournament. We started traveling further to compete in other tournaments along with our friends from M&J. Bobby Sangster, Blake, and I traveled to Iuka, MS to fish the St. Jude’s Fishing For a Cure Tournament.

We caught a 3 fish bag limit with Blake catching a 33-pound blue. In the weigh-in line, Blake’s excitement was bouncing off of him. When I tried to hand him his fish to weigh in he became nervous with the crowd watching. But once he turned around with his fish in his arms the crowd started cheering and clapping for him he became more confident.

Blake was sure he would win the youth division, but he ended up 8 ounces shy. I will never forget when he looked at me and said, “No matter what, win or lose, Daddy I am just glad I caught my biggest blue!”

Our next tournament was in Decatur, AL with the Bama Blues Tournament trail. Blake fished with our M&J friend, Allen Sheppard, while Bobby and I fished in my boat.

Blake and Allen have become great friends. Allen allowed Blake, an 8 year old boy, to catch the fish and be the one to turn in the catfish at weigh-in while he drove the truck. Blake handled himself and those fish like a professional. His pride and excitement was all over his face as he showed off the fish to the crowd. I will always be grateful to Allen and his selfless act that boosted Blake’s confidence.

I can see Paisley and Blake gain new skills, refine their current skills, and become more confident in their catfishing with every trip. I can’t wait to introduce my youngest daughter, Macie, to catfishing. To me, this is the best part of fatherhood, bonding over the love of the outdoors and the sport of catfishing.

Something I always tell my kids after a tournament is that win or lose we learned something today. When we don’t place, it’s not a loss, it’s a gain in knowledge. When it’s a win, we had applied that knowledge. But first and foremost, we thank God for making all this possible, because without Him and His guidance we would not be part of this great sport.