2022 CatMasters Championship – How They Fished 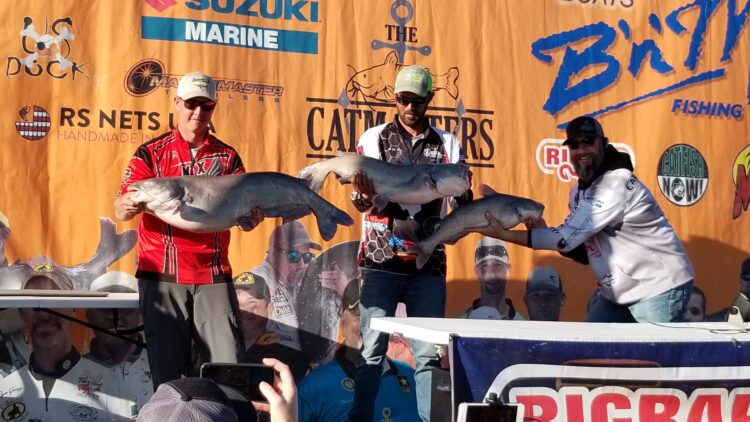 The tournament is part of the ACA Tournament Alliance so competing ACA members are also competing for thousands of dollars in cash and prizes in the points race. Additionally, ACA members receive a chance to win a SeaArk boat package in a drawing at the end of the year.

Each team can be up to three anglers and five fish per day was the daily limit. A cold day one on Friday was followed by a slight warming trend. Anglers started fishing in upper 30s temperatures that rose into the 60s by weigh-in time. Most anglers reported that high winds were a challenge to drifting so they relied on anchor fishing.

Day one ended with Team Callaway/Bane leading the 82 team field with 95.57 pounds. Following in second was Team North Texas Fatcats with 74.56 pounds. The third spot was held by Team Mtc with 71.04 pounds and fourth place was held down by Team Smith with 70.49 pounds. The top five were rounded out with Team Kataholics weighing 67.60 pounds on day one.

Big Fish for day one was caught by Dan Adler and Devin Fouts. They had a 48.56-pound blue to claim the honor. Like most two-day tournaments, day two was set up to be a shootout. 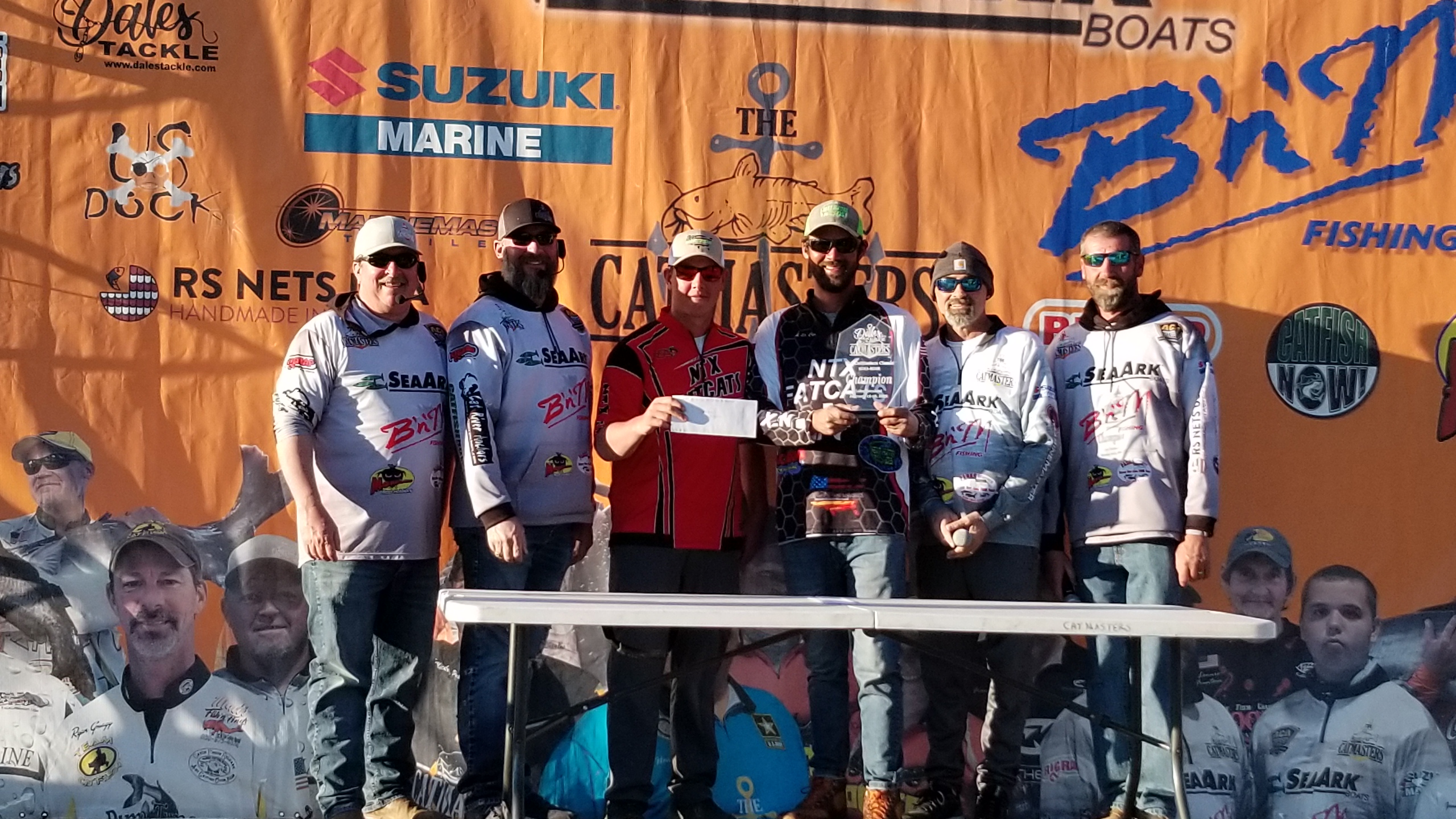 Al St. Cyr and Connor McPherson (Team North Texas Fatcats) teamed up to take the top spot on Tawakoni. They had a day one weight of 74.56 pounds which had them setting in 2nd place after day 1. They added 81.48 pounds on day 2 for a winning total of 156.04 pounds.

St. Cyr and McPherson scouted the lake the previous weekend. They developed a game plan from their scouting and stuck with it. It paid off.

“The weather worked in our favor,” McPherson said. “The clear sunny skies brought the fish up into the shallows. We started both days fishing 3 feet of water. Our plan was to catch a limit before the sun came up.”

The strategy worked and the team caught a 5 fish limit in the first 30 minutes each day. When the sun came up they started working their way into the shallow flats.

“We were catching larger fish the farther back we went,” offered McPherson. “Our biggest fish (35lbs), was caught in 12-18 inches of water with the boat beached in the mud.”

“We stayed on a huge flat both days,” added St. Cry. “We fan cast around a silted in the creek channel. Each morning we would start in 3 feet of water and work our way back into 1 foot by the end of the day.”

“The bites were pretty slow on shad,” noted McPherson. “But we caught a nice grinnel (bowfin) early on that turned out to be a great bait! We stayed on anchors for both days. We did not mark a single fish during the tournament. We just based off of the locations where we were expecting them to be feeding near creek mouths and across flats.”

“We caught around 60 fish during the tourney,” reported St. Cry. “We used shad and bowfin for bait with the bigger fish coming off of bowfin. We were able to get both overs and three huge unders each day. That made the difference for us.”

“We would like to thank our sponsors Meat Hunter Rods, SmackDown Catfishing, Dales Tackle, and Rock Creek LLC for their support,” concluded St. Cry.

“We had a blast at the tournament,” added McPherson. “I don’t think it has completely sunk in yet. We have won tournaments in the past, but being a tournament of this size and with this level of competition on our home lake just makes this one a little more special for us.” 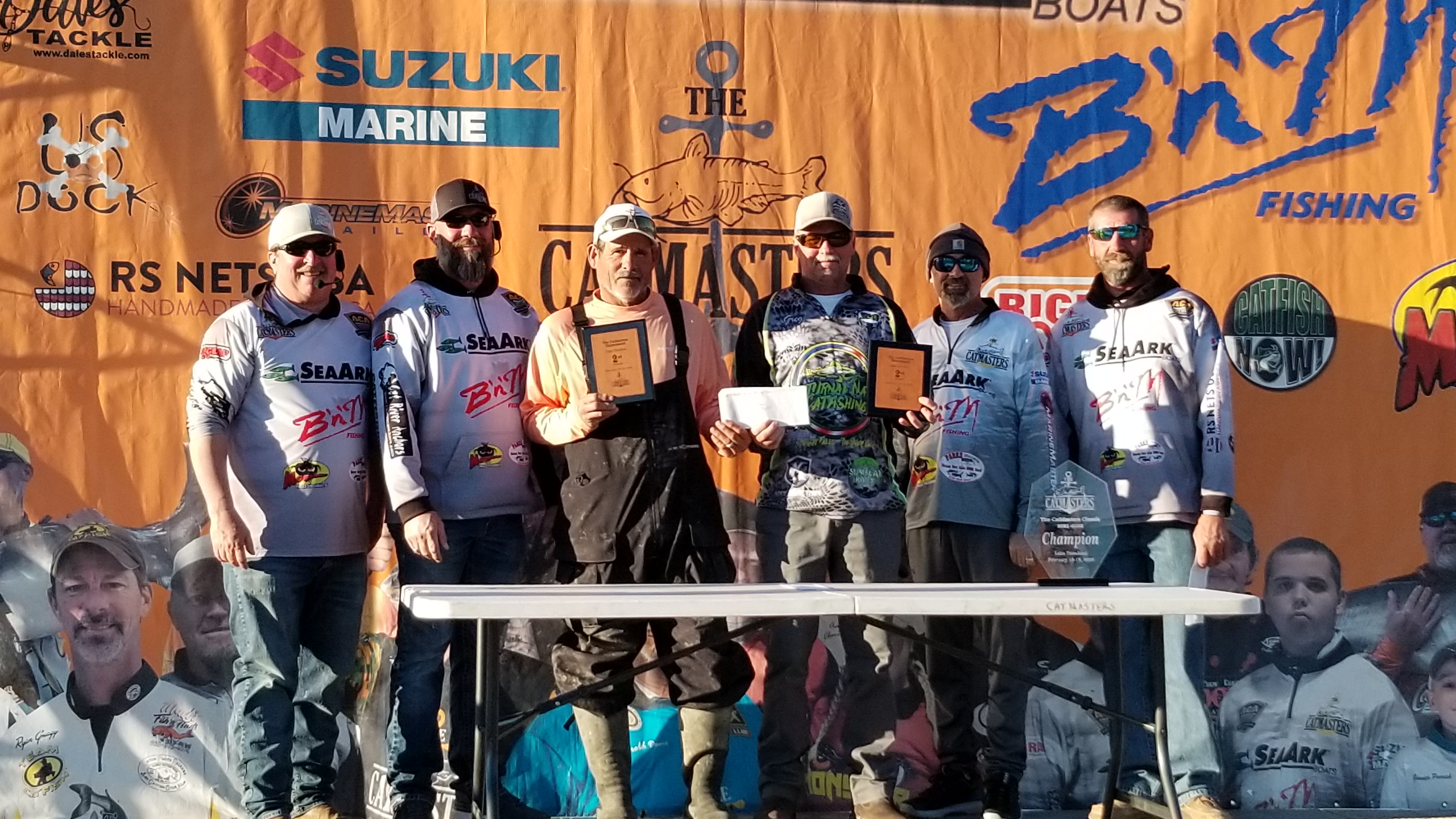 The runner-up spot went to Greg Callaway and Randy Bane. They had a strong lead at the end of day one with 95.57 pounds. Their day two weight of 58.46 resulted in a two-day total weight of 154.03, just 2 pounds out of the lead.

“We had 2 days to pre-fish,” reported Callaway. “The weather was challenging to say the least. We fought 30 mph south winds the first day and rain with a cold 30 to 40 mph north wind the second.”

Callaway and Bane felt like they had two areas on the lake that would be holding fish. They expected fish to be moving up out of the deep main lake into shallow muddy flats. They simply braved the wind and went on the hunt. After 2 days of graphing and fishing, they found that most of the big fish were in 3 feet of water and scattered just outside heavy timber.

“We spent 2 days trying to catch them,” reported Calloway. “We determined that they weren’t up in the shallows to feed but rather warming up and sunbathing. On day 1 of the tournament, we set up just outside of a row of timber on a 3-foot deep flat. It was an early bite with both of our big fish being caught in the first 45 minutes of fishing.”

Their experience with prefishing suggested that the bite was going to be a finicky one at best. They responded by using a free spooling reel with the clicker engaged to lessen any tension the fish might feel.

“If the fish ever felt the rod tip they would just drop it and leave it,” explained Calloway. “Small 6-inch shad heads and little chunks of skipjack worked best for us. We tried big bait but the fish just weren’t interested in it.”

“I think lighter and smaller hooks would have caught more fish,” said Calloway. “But the heavy timber wouldn’t allow it.”

“As always we had fun and enjoy fishing as many tournaments as we can,” joked Callaway. “Win or lose it’s better than working!”

“A lot of people don’t fish the shallow water in the winter,” added Bane. “We fish it year-round. I think that the sun warms it up and those fish just come up in there. On the second day, we just needed two more pounds. We had a fish pull down with about 40 minutes left but it didn’t hook up. But that’s just fishin.’” 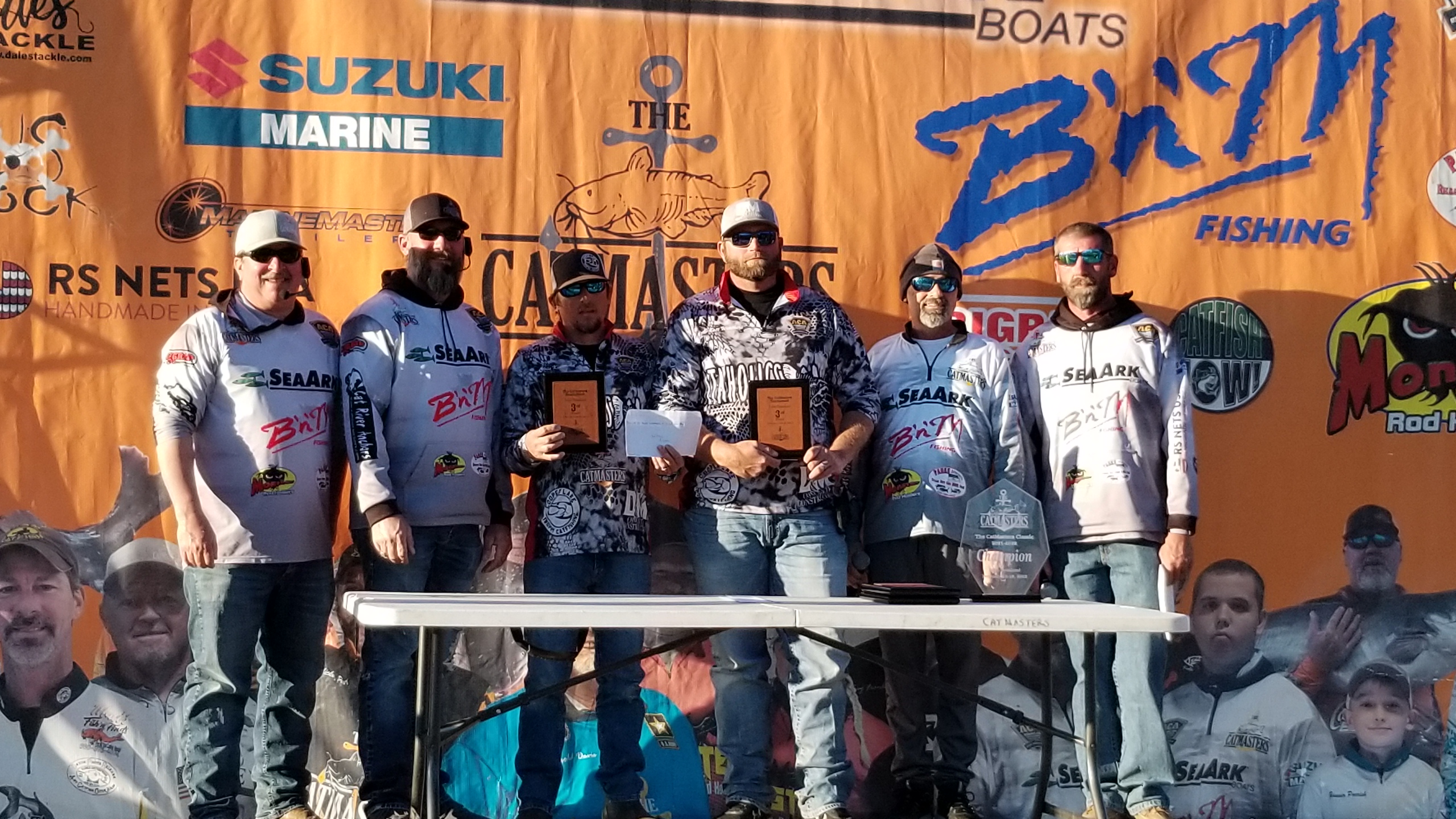 Bringing in the 3rd place bag was Team Kataholics made up of Matt Weathers and Chris Kinworthy. They brought 151.09 pounds to the scales in two days of fishing to earn the third-place honors.

They reported that high winds kept them from prefishing as they would have liked. They set their strategy with little time spent on the water before tournament day.

“We weren’t able to do much pre-fishing due to the high winds,” reported Weathers. “We found fish in 3 to 7 feet of water in the little time we spent prefishing. We stayed with what we found and fished the 3- to 7-foot range.”

Sticking with their plan and fishing with patience paid off for the team. They were able to hold down 5th place after day 1 and move up to 3rd on the final day.

“We fished with gizzard shad and patience,” said Weathers. “We anchor fished both days. Good bait and sticking with it allowed us to put together a solid weight both days of the tournament.”

“We would like to give a shout out to Damon with Xtreme Bait Tanks,” concluded Weathers. “Thank you for a well-made bait tank that kept our gizzard shad swimming during the tournament.”

Other Winners
With 82 registered boats the CatMasters at Tawakoni paid 9 places. The remaining teams and weights are listed below along with the other awards that were presented. 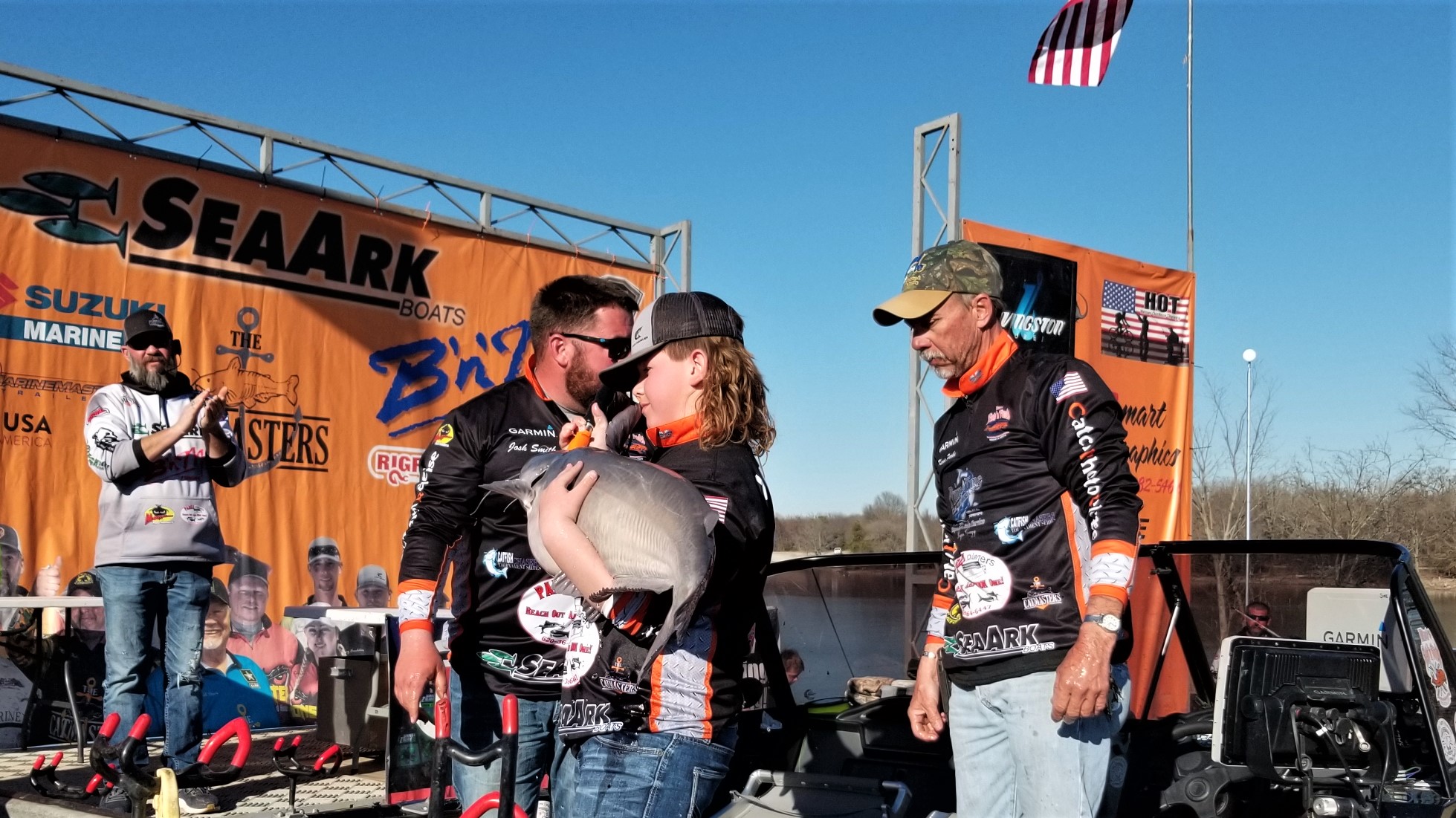 The top finishing youth award went to Cowen Whitman. He was fishing with Josh Smith and Kevin Parks. The team finished in 5th place. 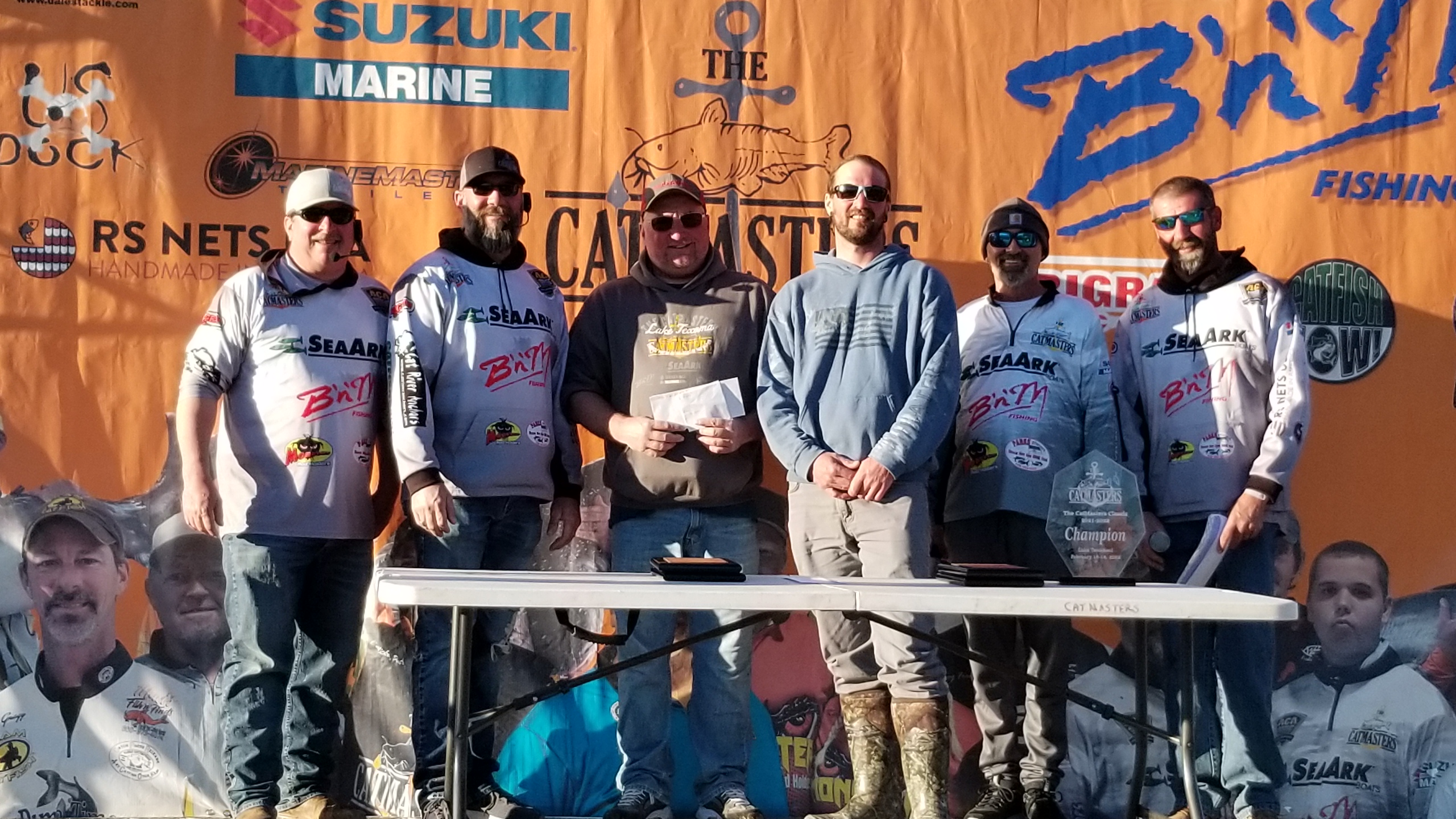 Dan Adler and Devin Fouts brought in the Big Fish on day 1 with a 48.56-pound Tawakoni blue cat. They also placed 4th in the tournament. 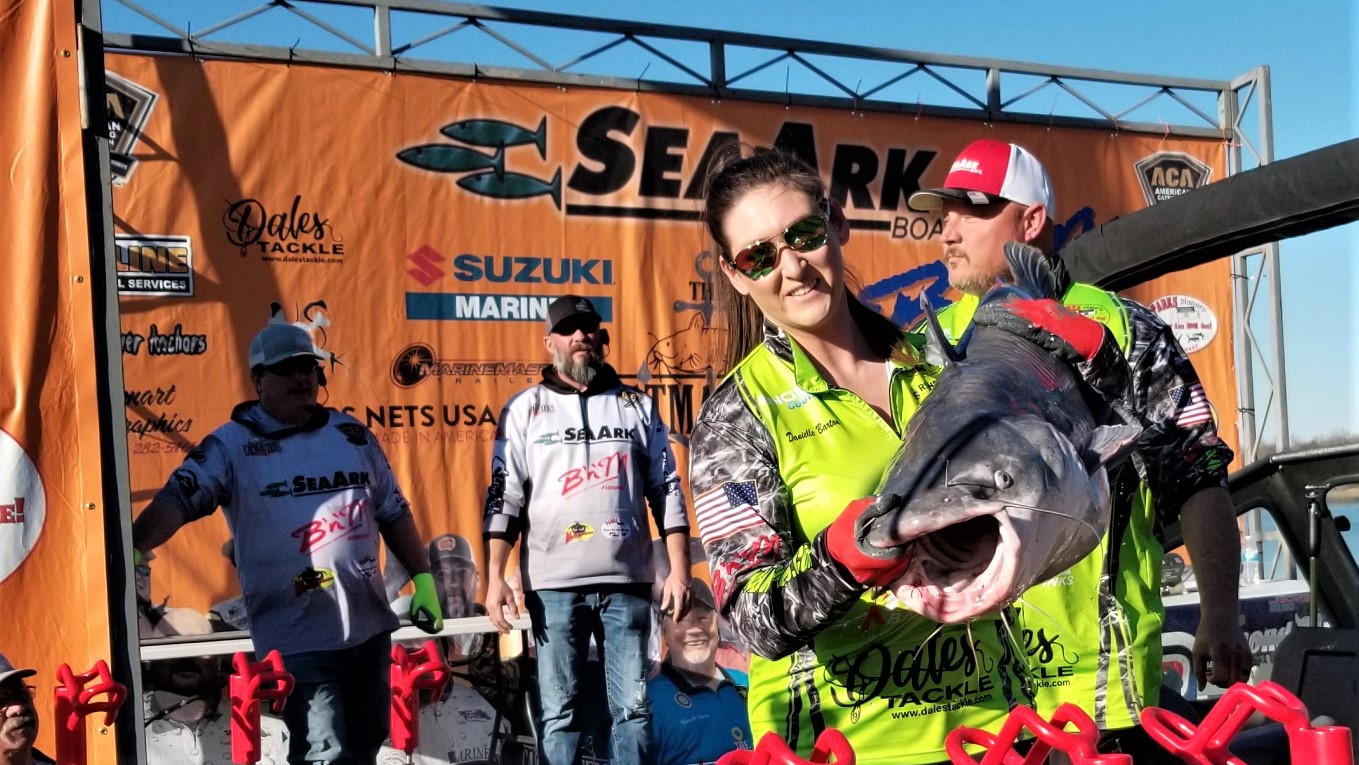 All of these awards went to the B’n’M Poles team of Jason “Spud” Barton and Dannielle Barton. Fishing under the team name of Heroes Outdoor Therapy, the husband-wife team collected all of the above-listed awards while also finishing 6th place overall in the tournament.

Final Thoughts
Lake Tawakoni produced a total weight of 3,400 pounds of catfish coming to the scales. Of that weight, 1,900 pounds came on day 1. In the final analysis, it was a very close competition with only 2 pounds separating the top two teams.

“Everyone I spoke to on day 2 fished off the rope,” said Chad Mayfield who attended the event to take photos for CatfishNOW. “Cut shad was the bait of choice but I did hear of one boat that used skipjack. It was a shallow water bite, with most fish coming from 15 inches to 12 feet deep. The bite was best early but the fish came in waves during the day. It was a slow bite that required a lot of patience to be successful.”

The Tawakoni event ended the 2021-22 season for the CatMasters. Planning is already underway for the 2022-23 season. Stay tuned for some exciting announcements for the coming year by following them on Facebook and checking them out on their website.