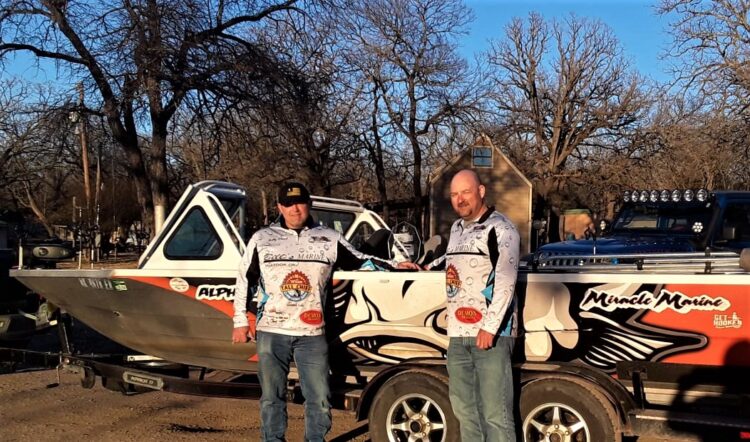 A long year of competition came to an end following the 2021-22 CatMasters Classic on Lake Tawakoni. Anglers have been competing all year for the coveted points race championship and the $20,000 check that accompanies it. The points champions are determined by the highest scoring 3 tournaments of the 6 tournaments on the trail.

Two of the 82 teams competing at the Classic were Cody Forshee and Billy Elrod. They were not new to the competition. It all began for Forshee and Elrod last year when they teamed up to fish their first season of the CatMaster trail. They fished under the Team name, Bill and Cody’s Excellent Adventure. 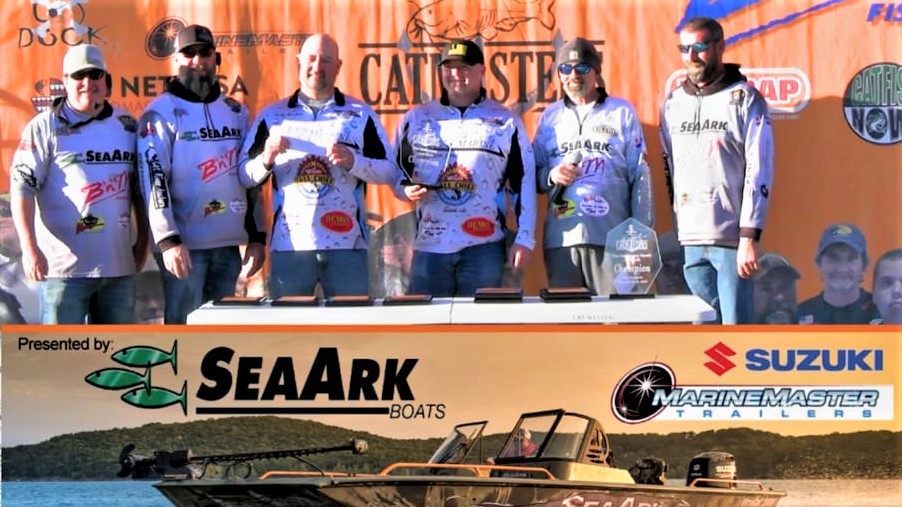 The Points Championship is not about a single tournament win, but the journey throughout the year. It requires consistent performance under all kinds of conditions. In the end, consistency wins out over total numbers.

“Billy and I teamed up for the first time to fish the 2020-21 season of the Catmasters trail. We had a decent run and ended up finishing third in points. Every destination was new to us that first year. We struggled. We were much better prepared going into our 2nd season.”

Traveling tournament anglers often face completely new bodies of water and must adapt to them and perform well. The three tournaments that resulted in the championship for Cody and Billy were Milford (2nd Place), Texoma (5th Place), and Helena ( 9th Place).

“Milford is a couple of hours from me,” said Forshee. “So that was homecourt advantage. We knew we would have a shot there. Texoma was another lake we were confident in. The finish we are most proud of came at Helena. We are not big river guys. We have come a long way with our bumping game and it paid off with a 9th place finish.”

“Chasing points is definitely a grind,” said Elrod. “The season started on the Mississippi River. We had never fished the river before so we fished a month straight in our first season trying to learn how to bump. We had it in our minds if we learn the river and pull off a top ten finish we could make a real run for the points.”

Successful tournament fishing depends heavily on doing your homework on the waters you are going to fish. Forshee and Elrod have followed the advice of those that they learned from to make the most of each individual tournament and develop the consistency needed to compete in the points race.

“The Catmasters tournament trail requires a well-rounded fisherman to win the points race,” offered Forshee. “It requires a whole lot of luck also. Billy has been a great partner to fish the Catmasters with. Billy and I would like to thank Tim Gregory for being a backup fisherman for the team. We never had Tim on the boat, but he brought a lot of knowledge to the team.”

In addition to Gregory, Cody and Billy had other anglers to thank for their support and encouragement along the way.

“We recognize that we would have never been in this position without the knowledge a few fishermen have shared with us over the years,” declared Forshee. “We would like to thank Joel Roberts for the river knowledge he has shared with us. We could not have done it without him.”

“I would like to thank Andrew Melendy,” continued Forshee. “Andrew and I honed our skills together on the reservoirs of Kansas and Oklahoma. I wouldn’t be the angler I am today if I hadn’t fished all those years with Andrew.”

Thanks to their consistency throughout the year, Bill and Cody’s Excellent Adventure was in the driver’s seat going into the Classic. They were leading but two teams still had a chance to win the points race if either of them could also win the Classic. The rest as they say is history.

“We had a lot of things come together this year unlike last year,” recalled Elrod. “You can put all the work and skill into play but if you can’t get the big bite or when you do get the big fish landing it is another thing.”

“We are trying to improve our game when fishing and just talking to each other on the phone,” added Elrod. “It’s a curse, sometimes it’s all we think about—how can we get better? You have to be obsessed to be willing to put in the hours and endure the good and the heartbreaks of losing a big fish that keeps you just out of the money.” 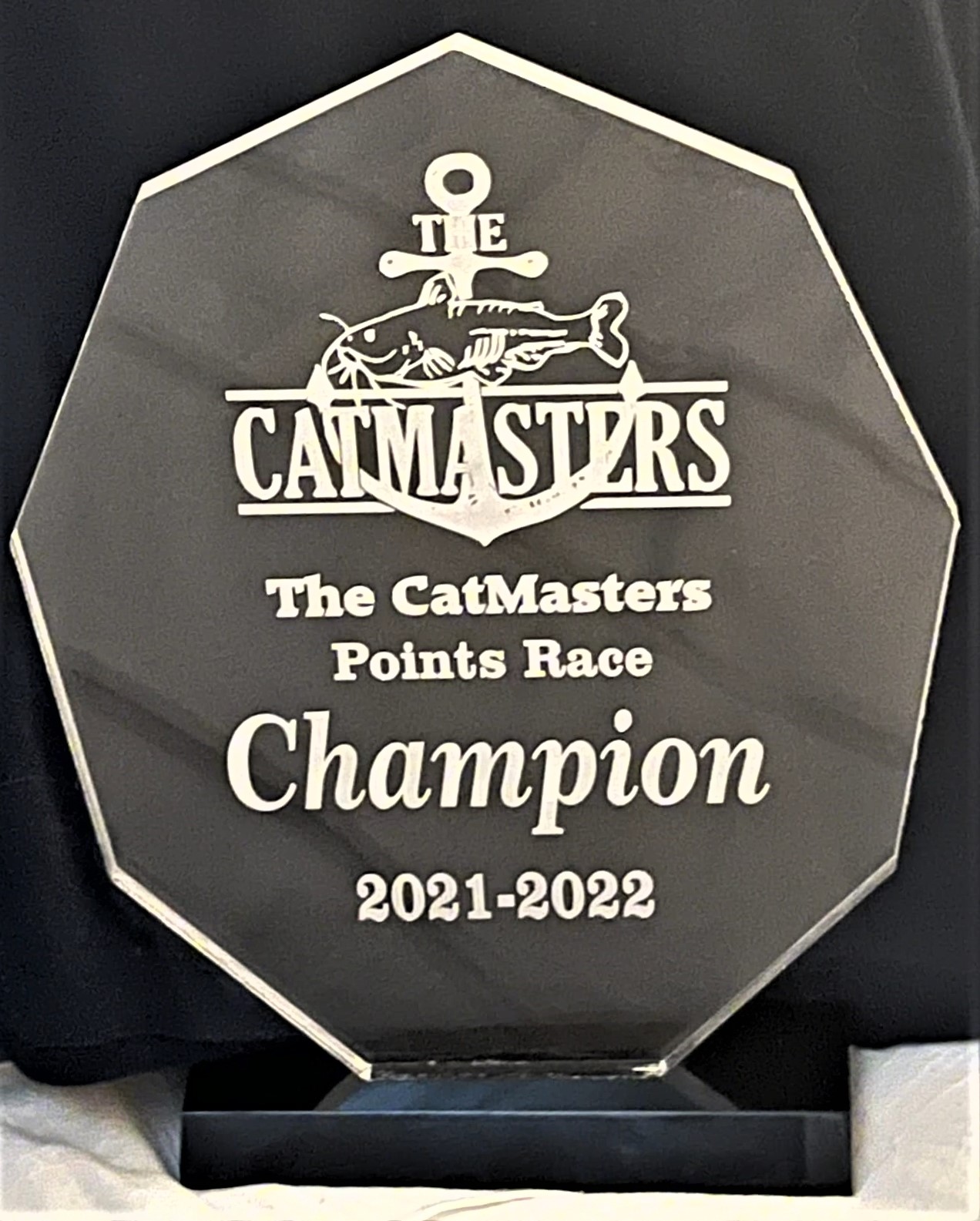 “They started off the year targeting this check,” stated Bryan St Ama, CatMasters Executive Director, as he presented the team with their check. “They worked their tails off for this. We saw them at every tournament!”

“These tournaments are stressful,” said Elrod in wrapping the season up. “So we have to remind ourselves to have fun. Our sponsors and our families are a big part of why we get to do what we do. I will say the competition is tough. We like fishing against the best which is another reason we like The CatMasters. These competitors have also become friends. Cody is a great fishing partner and innovator. He puts up with my singing, jokes, and shenanigans.”

“Billy and I would also like to thank Miracle Marine, Parks Planer Boards, Tackle Bandit, Wilson’s TALL CHIEF convenience store, and Bills Marine in Skiatook, OK,” concluded Forshee. “Thank you to all the friends on the road and our families at home. Finally, a big thank you goes out to the crew at the Catmasters and all the great teams that fish this amazing trail.