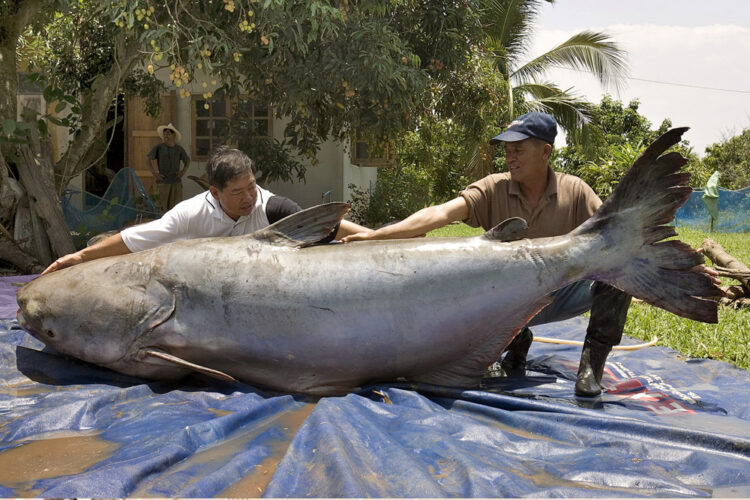 The facts about catfish often are even more astounding than the legends, like the story of this 646-pound
Mekong giant catfish landed in Thailand. (photo courtesy of Zeb Hogan)

Catfish and Catfishing: Believe It or Not!

Prepared to be amazed!

My mind is a trash basket. All my life, I’ve enjoyed prowling the back alleys of knowledge in search of trivial bits of information others might discard as worthless.

Robert Ripley caused my affliction. When I was a kid, I couldn’t wait to get one of his Believe It or Not! books so I could learn amazing things like how “the tail of the porcupine was used by the Crow Indians as a comb” and how a hen in the Marianas “sat on a live hand grenade for 26 days.”

As a teen, I started saving scraps of trivia torn from the pages of newspapers and magazines. And recently, much of this material found its way into my computer. No limit was set on subject matter, but strong favorites emerged, including catfishing trivia.

So it is you get to enjoy the following compendium of stimulating information, queer coincidences and strange stories about catfish and catfishing. I’ve spent years collecting these amazing facts and hope this avalanche of the irrelevant will surprise, bewilder, intrigue and entertain you as much as it has me.

On May 1, 2005, villagers in Chiang Khong, a remote district in northern Thailand, netted a steer-sized Mekong giant catfish. That incredible fish, 646 pounds and nearly 9 feet long, is the largest catfish documented in modern times and may be the largest freshwater fish ever recorded.

William Heckman, writing in Steamboating Sixty-Five Years on Missouri’s Rivers (1950), provided a record of the heaviest catfish ever reported in the U.S. “Of interest to fisherman,” he said, “is the fact that the largest known fish ever caught in the Missouri River was taken just below Portland, Missouri. This fish, caught in 1866, was a blue channel cat and weighed 315 lb. It provided the biggest sensation of those days all through Chamois and Morrison Bottoms.”

A July 2000 edition of London’s Daily Express newspaper reported a huge catfish—around 9 feet long, witnesses said—pulled an Austrian angler into a lake and towed him to his death. Anto Schwarz, 45, shouted to his fellow fishermen when he hooked the giant fish, a wels catfish, and tried to keep hold of his rod. After several minutes struggling, the fish pulled Schwartz off balance and dragged him into Eva Maria Lake near Vienna. Entangled in his line and unable to swim, he drowned.

Strangest Item Inside a Catfish

The Manitoba Morning Free Press in Winnipeg (May 18, 1894) tells of a 140-pound Kansas catfish caught by Douglass Smith. In its stomach was found a small bottle, securely corked, containing this message: “Whoever will find this will please send it back to me. H.E. Pipes.” Mr. Pipes had thrown the bottle in the Kaw River three years earlier, 75 miles from where the fish was caught.

On May 29, 1992, Dorothy Taylor of Ft. Scott, Kansas, was fishing at Lake Fort Scott when she caught a 53-pound flathead catfish. To her surprise, when the fish was cleaned, inside its stomach was a 1.5-pound channel cat with her hook in its mouth. The flathead had swallowed the channel cat tail first.

Don Brewer used his hands to catch a 60.6-pound flathead catfish and beat 91 competitors to win the 2006 Okie Noodling Championship’s coveted “Big Fish” title and $500 in prize money. Proof that Brewer loves noodling is the tattoo his wife bought him for Valentine’s Day—a catfish gnawing on a severed human arm with the words “Bite Me” below.

“If those fish rip off one of my arms, I hope it’s my left one,” Brewer told a reporter, looking at the tattoo on his broad, right shoulder.

In the April 2000 edition of Sport Fishing magazine, editor-in-chief Doug Olander published a story that claimed thrill-seeking college kids were licking slime off saltwater catfish to get high. The article said the students called themselves “slimers” and were paid as much as $200 for a fresh catch. Furthermore, the hallucinogenic catfish goo was supposed to produce a “whisker-lickin’ good” trip that would give users the sensation of being under water.

The story was so outlandish, most readers should have realized it was fabricated for the magazine’s April Fool’s special issue. But somehow, like the Energizer Bunny, it just kept going and going and going. Fifteen years later, the tale continues circulating around the Gulf Coast.

“It’s scary how easy it is to start an urban legend,” said Olander.

Believe It or Not!

According to a 1951 “Ripley’s Believe It or Not” column, when James Price of Locust Grove, Arkansas accidentally dropped his dentures into Bull Shoals Lake, he wrote them off as a loss. But 10 days later, he got them back when he caught the 20-pound catfish that had swallowed them!

Also reported in Ripley’s: “A live catfish was found by lumbermen in Tuscarawas Park, in New Philadelphia, Ohio, in a water-filled depression in a tree 40 feet above the ground. The fish was dropped into a lake and swam away.”

An 1853 edition of Scientific American states that “a curious phenomenon attended the storm in [Norfolk, Virginia] on Tuesday night. Quantities of catfish, some measuring a foot in length, fell in different sections of the city, and some of the fields were literally strewed with them. Hundreds were picked up in the morning.”

Then there was the motorist who was driving near Alexandria, Virginia, on December 22, 1955 when a frozen catfish crashed down through the windshield of his car. Where it had been up there in the wintry skies that morning will never be known. The first thought was that it might have fallen from a plane. This seems unlikely. For one thing—catfish seldom ride planes. And even though airline food is not always epicurean, it is a known fact that no airline serves catfish, frozen or otherwise.