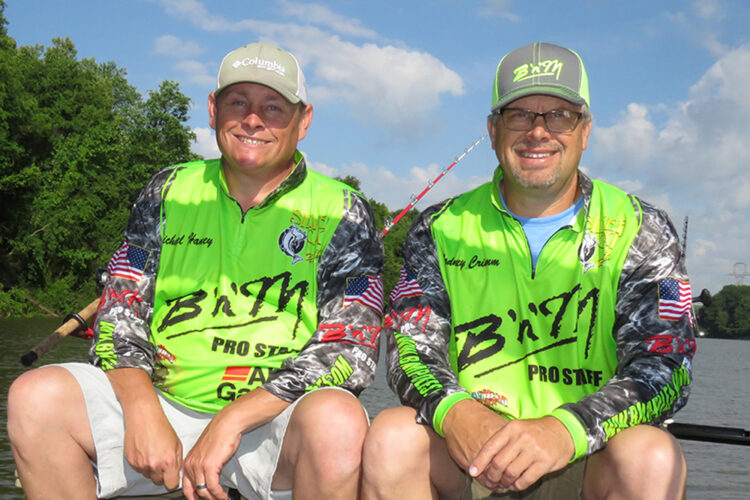 Competing as a Team of Brothers

Tournament partners that work well together have a better chance to put some money in their pockets.

In many types of fishing, anglers simply fish how they wish, but professional catfishermen must compete as a team. Traveling, fishing events, or preparing for tournaments sometimes have the teams spending more time with each other than with their spouses.

Michael Haney of Thaxton, Mississippi, and Rodney Crimm of Ecru, Mississippi. grew up together. In fact, they’re half-brothers with the same mother, but different fathers. Like all brothers, they fight and needle each other, particularly when it comes to who catches the most fish in their free time, but when tournament time comes things change. They divide up the tasks to best accomplish the mission of putting the most and biggest catfish in their boat.

“Growing up, we fished for whatever we could catch,” Michael recalled. “Crappie, bass, catfish, anything. It was really good that we grew up fishing together because we learned to fish alike. When fishing for fun, it’s knock-down, drag-out competitiveness about who catches what. Come tournament time, that ceases. Then, it’s about winning as a team.”

“As long as I can remember, we fished together,” Rodney echoed. “I’ve been fishing for big catfish since I was little. When I was six or seven years old, I caught a flathead that weighed about 13.5 pounds. I thought I caught the biggest fish ever. I was hooked.”

In 2017, the brothers decided to enter a Mississippi Catfish Trail event. They struggled in that first tournament, but placed second in the next one and brought in the tournament lunker. By the end of the season, the rookies earned the “Anglers of the Year” title.

“When we first started, I lived four hours away from Rodney and he lived close to where the tournaments were held,” Michael remarked. “He got stuck doing a lot of scouting. Now that we live 20 miles apart, it’s a lot easier to share that load. Just being able to work together as a team is great.”

Even before a tournament, they get together to prepare their tackle and develop a plan. On the water, they divide up the chores without much discussion. Each performs whatever tasks are necessary in a routine that they have developed over time.

“We get focused on what we need to do,” Michael explained. “If we pull up to a spot, one of us gets rods ready while the other one cuts bait. While one’s cutting bait, the other one starts casting out the lines. We’ve fished together so long, we know exactly what needs to be done. We don’t have to plan who does what. We just do it. I think it’s a benefit of all those years of experience that we’ve had together fishing and learning to fish in a similar way.”

Learning From Each Other

Good partners can learn from each other. One person might know a bit more about fishing a certain way. The other might know a different way. One partner could know a particular lake or river better than the other. In a fishing team situation, partners must recognize each other’s strengths and weaknesses and adjust accordingly to put the most fish in the boat without letting egos get in the way.

“To me, it’s crucial to have a good work ethic,” Rodney commented. “I don’t want to fish with somebody who wants to take all the glory. I want somebody willing to work just as hard at winning as I am. I want a partner who is willing to give and take, not one who thinks we need to do a certain set of things every time. I don’t want somebody who tries to be the center of attention all the time.”

Even the best partners don’t always agree. Just like in a marriage, sometimes arguments arise. Too much arguing can ruin a good fishing trip, a partnership, and chances to win a tournament. Partners need to resolve their disputes before things go too far and become irreversible.

“On our first tournament on the Mississippi River, we were fishing some baits suspended right off the bottom,” Rodney related. “The bottom of the river at that spot had a lot of old debris so it was easy to hang up. One rod got hung and I couldn’t get it without turning the boat. I thought it was hung in one spot and was trying to go with the boat to take pressure off the rod, but I was going in the wrong direction. Michael starts hollering and cussing and I’m like, ‘Well, I’ll get out on the bank!’”

“If you want to get out on the bank, I’ll take you over there,” Michael remembered saying. “You’re fixing to walk through the gumbo mud, the briars, and the snakes. Then Rodney said, ‘Let’s just go fish,’ and off we went. That could have been a knock-down-drag-out.”

Good partners also need to respect each other and try to accommodate each other as much as possible for the good of the team. It all starts with getting along. If they can’t, they need to find different partners. A long day in a small, cluttered boat filled with sharp objects with someone unlikeable quickly becomes even longer and unpleasant.

“If I was just starting out, I would want to fish with a person before picking him as a partner,” Rodney advised. “I’d want to spend some time in a boat together, not during a tournament, to see if we can get along. I would want a partner who did some different things than what I normally do so we could learn from each other.

“I’d also want someone who is willing to focus on doing whatever it takes to do our very best every time,” continued Rodney. “I want a partner who will fish just as hard all day long as I’m going to fish, right to the last minute. We may not win every tournament, but we’re going to leave everything on the water until time to head to the weigh-in.”

Partners won’t always agree and sometimes need to work things out, but they always need each other to catch more fish and put more money into each of their pockets.