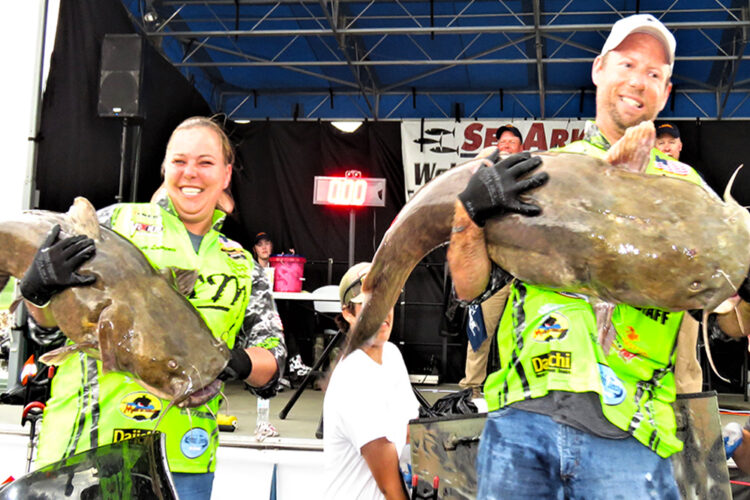 Tournament anglers are preparing their minds and their boats to take better care of the fish they catch.

No group of anglers shows more concern with catfish conservation than tournament catfish anglers. The whole notion of Catch-Photo-Release (CPR) is embedded in tournament fishing today. More and more tournament directors have moved conservation to the top of their priorities and it is being reflected in their rules and adopted by the anglers.

The result of stressing healthy releases at tournaments has spilled over to recreational fishing as well. Tournaments all across the county are finding ways to improve the release of healthy fish following the weigh-in as they educate anglers in general on the importance of caring for the catfish resource.

One of the first tournaments that I noticed stressing fish care was Monsters on the Ohio. Many of the methods pioneered by Aaron Wheatley have been adopted by other tournaments too. Wheatley recognized that one of the most significant things he could do to promote healthy releases was to shorten the time spent in the weigh-in line.

“One of the most important things we do to preserve the fish relates to our weigh-in line,” said Wheatley in a 2017 interview. “We prefer that the guys stay out on the water with their fish in the livewell instead of waiting in line for an hour or hour and a half without fresh water.”

To shorten the time in line, Wheatley recruited volunteers to drive the tow vehicle through the weigh-in line. That allowed teammates to get in the boat and attend to the fish at the scales without wasting time getting in and out of the vehicle.

“If you save just 30 seconds per boat, with 100 boats you have saved 50 minutes,” declared Wheatley. “You are saving a lot of time there.”

Monsters on the Ohio also provided weigh-tubs about 2 boats deep in the line so anglers could pull their small fish out while in line, instead of chasing them around the livewell at the scales. More time saved.

Wheatley noted other things like having an adequate facility to handle the number of boats efficiently, allowing anglers to weigh stressed fish early, and having oxygenated tanks on hand to treat stressed fish. All those efforts contributed to improved fish care and healthy releases.

As the sport progressed, anglers started installing equipment on their boats to make sure they had what they needed to keep their fish alive. After all, a dead fish at weigh-in was a disqualification at most tournaments. More and more boats were showing up with bigger livewells, recirculation pumps, and oxygen systems to keep the fish healthy.

The CatMasters tournament trail has put conservation on the top of their priorities. They were the first to introduce a livewell rule back in January of 2019.

The CatMasters rule requires either one 50-gallon single tank or two 40 gallon tanks as a minimum. And, they have to be capable of recirculating water. Additionally, pure oxygen systems have been encouraged since that time.

They also initiate a 3-fish limit based on the body of water, the size of the trophy fish, water temperature, and trailering distance. Big fish destinations, like Helena for example, is a 3-fish limit. On the other hand, Possum Kingdom operates with a 5-fish limit because it is characterized by smaller fish weights.

Additionally, CatMaster locations use nursery tanks to allow sluggish fish to be resuscitated before being returned to the water. More recently, CatMasters have gone to mandatory oxygen during summer events because it results in a lower mortality rate for tournament fish.

“Low oxygen is the number one cause of fatalities in fish care,” explained Bryan St Ama of The CatMasters. “Ninety-five percent of struggling fish at the 2021 Caruthersville weigh-in came from teams not using oxygen or not using oxygen systems properly.”

Alex Nagy directs the Twisted Cat Outdoors Tournament Trail (TCO). He has adopted many rules that benefit the healthy release of tournament fish. To begin with, a live well is required. It must have enough capacity to care for the size of the fish expected to be caught at any given location. Additionally, oxygen is recommended.

TCO does not allow culling of fish at the ramp or weigh-in line to keep fish in the livewell for a minimum amount of time. They do not accept foul hooked fish at the scales, no dead fish may be weighed, and all fish are returned to the same body of water where the tournament is held. All these requirements promote responsible handling of tournament fish.

“All of my anglers are taking the extra steps to keep fish healthy,” Nagy said. “I was really surprised at how many boats had oxygen installed last season. We like seeing that!”

“The key for great healthy fish is fresh water and oxygen,” concluded Nagy. “We encourage anglers to make sure they change the water out as much as possible with clean fresh water.”

Tournament anglers like Jason and Daryl Masingale are longtime proponents of good fish care on the boat. They too feel that fresh water is a necessity to keep fish healthy in the livewell.

“The most important thing we do is keep the water fresh,” noted Daryl Masingale. “After putting the fish in the live well, we pump fresh water in and drain out the old water. Then we maintain a constant flow of fresh water especially when the water temps are over 70 degrees.”

“As long as we are on the water we will constantly pump fresh water in,” continued Daryl. “We pull the drain plugs out of the bottom of the livewell to drain out anything the fish pukes up. When we take the boat out of the water and wait in the weigh-in line we recirculate the water to help remove the CO2 and add oxygen from an oxygen bottle.”

With the growing support of fish health by individual tournaments and anglers, a national organization is an obvious next step. Over the years several efforts to bring the catfish community together on the national level failed. Finally, the American Catfishing Association was formed from an effort that began in 2019 to bring a national voice to the catfish community. It is a member-based organization with a major emphasis on catfish conservation.

The mission statement of the ACA says, “The American Catfishing Association was created to support the millions of devoted North American catfish anglers through dedication, conservation, and integrity.”

As stated on their website, they support tournament regulations that “…encourage responsible fishing practices…” A national organization like the ACA, with adequate membership support, is the next step in taking care of the resource and growing the sport of catfishing.