When Clients Want to Compete 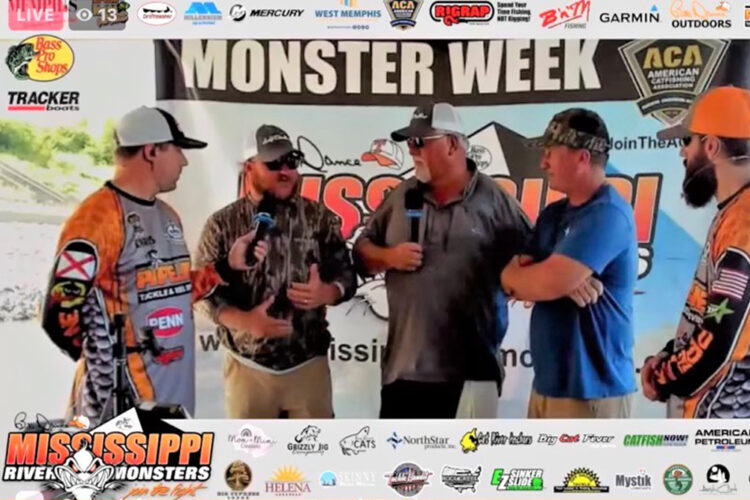 When the three days of tournament fishing were complete, the anglers had a burning desire to do it again.

Normally, a guided catfish trip results in a few lessons from the guide, some photo opportunities with trophy catfish, and a few live-released fish. One trip in mid-September, 2021 had all of that and more. It included a trip to the scales at the Mississippi River Monsters (MRM) tournament in Memphis, TN.

Capt. David Magness owns and operates Cat’n Aroun’ Guide Service where he is an accomplished trophy catfish guide on the Mississippi River. He mostly plies his trade from north of Memphis, TN to Vicksburg, MS. As a B’n’M Poles pro staff angler, he has fished the MRM several times and has plenty more tournament experience.

Kurtis Bramlett, also known as KB, and Monte Belew had fished with Magness a few times before. Belew is a retired sheriff and a newly appointed TWRA Commissioner.  His son-in-law Kurtis is a Memphis businessman.

“Some of my best memories are of me and friends going catfishing,” Bramlett said. “We fished on lakes, ponds, just wherever we could growing up. Then I discovered the thrill chasing monster blue catfish on the Mississippi River and all the unique techniques, gear, and knowledge that it requires.”

“As someone who grew up fishing the Tennessee River it’s amazing to fish the mighty Mississippi River,” added Belew. “With all its twists and turns and unbelievable current, there is always the unknown of what’s about to rip that pole out of your hands and give you the fight of your life.”

Bramlett started studying and doing research on how to fish the Mississippi River because even though he grew up in Memphis his fishing had been limited to small ponds and lakes. He had spent very little time on the river and he knew he needed to learn more to be successful.

“My research led me to discover Capt. David Magness,” recalled Bramlett. “I called and booked a trip in October 2020 for me and a friend. That trip is where I began to learn the techniques and skills needed to fish the Mississippi River. We had an amazing trip fishing with a top-notch guide.”

That first trip with Magness was a learning experience. Bramlett and his friend were introduced to the rudiments of big river catfishing. This wasn’t the equipment used in small lakes and ponds. The anglers were finding out about B’n’M SilverCat rods, heavy sinkers, monster circle hooks, braided line, and more. All the things needed to catch and land trophy catfish. Several more trips were taken over the months that led up to a discussion of the Mississippi River Monsters tournament.

“I threw the idea out to the Capt. for us to fish the tournament together,” Bramlett said. “I knew it would be an awesome experience but one I needed someone with expertise to do it with.”

“Kurtis and Monte had fished with me three previous times in 2021,” explained Magness. “They asked me if I would consider fishing the MRM tournament. I said YES, without hesitation.”

On the previous trips, Bramlett and Belew had brought other friends so the boat was full which necessitated anchor fishing. Magness explained to them that fishing in the MRM tournament would be much different and that tournament day fishing is not like recreational fishing.

“We gonna’ get after it,” Magness said to the eager anglers.

Then Magness described the bumping technique that they would use. They had immediate interest and willingness to learn. They even wanted to fish on Thursday in the Monster Day competition.

Thursday was their first day out and the bumping lessons began. Magness found a clean sandbar for the first lesson and then progressed to tougher types of bottom with different structure and the possibility of hangs.

“Prefishing was an eye-opener,” explained Bramlett. “I didn’t realize the amount of preparation and research that goes into fishing a tournament like the MRM. It also builds excitement for the day of the tournament. The most important technique I learned was the bumping technique. I had never done it before and really wanted to get it down pat by tournament day. We spent numerous hours bumping the bottom of the river trying to master the skill.”

“Both KB and Monte learned fast,” recalled Magness. “KB caught a mid-30 pound blue that we weighed on Monster Day Thursday. When that fish bit and turned its head in the current, KB was locked in battle for several minutes. He was hooked!”

On the team’s second day (Friday) they continued to practice but about 50 miles north of Memphis. They fished different places, different scenarios, and different situations as they developed a plan for Saturday. Not finding what they wanted north of Memphis they set their strategy to fish south on tournament day.

Magness picked up the anxious anglers at the Bass Pro Pyramid in Memphis for the livewell check. They would return there at the end of the day for the weigh-in. The team launched from Mud Island and headed downriver about 30 miles. The weather was crappy, but the anticipation and adrenaline were high.

The team moved on to their second drift and struck out. Same thing on the third drift, nothing. They couldn’t find the right pattern or where the fish had moved to so they kept looking.

“We ended up hammering a revetment bank in 60-75 feet water,” explained Magness. “We caught a couple of nice fish and I guarantee you that no one had more fun or laughs than we did. The anticipation, the wait, the adrenaline, the memories, the family time, the laughs, the bullying of each other, holding the fish up and showing the crowd—all non-replaceable.”

“Seeing the tournament and all that it brings to town is solid proof that catfishing has turned a new corner and is getting bigger and bigger,” characterized Belew. “As a newly appointed TWRA Commissioner, I see the importance of protecting our big catfish and watching our harvest commercially and recreationally.”

“Capt. Magness taught me and my son-in-law a lot of things about catfishing and country music,” joked Belew. “What it’s really all about is time together with friends and family!”

“Fishing the tournament with Capt. David and my father-in-law was unbelievable,” concluded Bramlett. “From prefishing, to registration, actually fishing, and the weigh-in, it was all unforgettable and full of excitement. I own a freshwater clothing company called Lake Dwellers.  Having had experience with several other fishing and water sport activities and tournaments, I can say that the MRM has an atmosphere like no other. You can sense a real feeling of community and camaraderie among the anglers. I am already looking forward to next year!”

The determined team fought through the inclement weather and overcame the lack of bumping experience before the tournament. Bramlett and Belew brought 64.89 pounds of Mississippi River blue catfish to the scales to show the gathered fans. Their weight was good enough for a respectable 48th place finish out of 110 teams competing in the event. With one catfish tournament under their belt, they have already booked Capt. Magness for the 2022 MRM event which will take place on September 14-17, 2022.