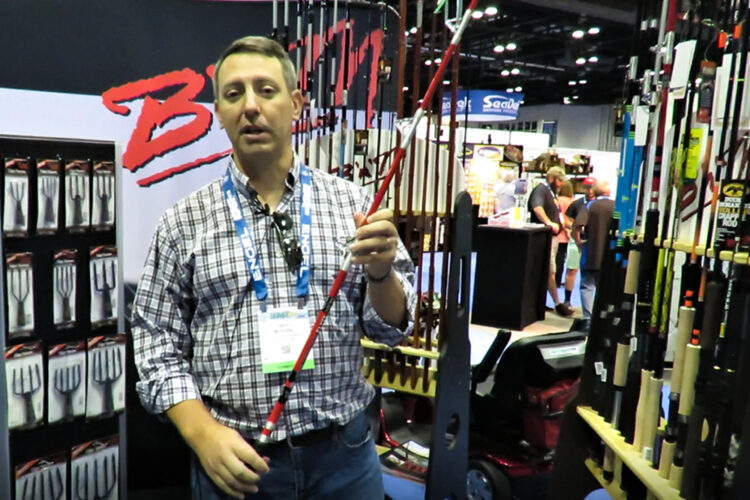 B’n’M Poles Director of Marketing, Jason McDuffie, is shown here at ICAST where suppliers and retailers plan inventories for the coming year. The supply chain problems that developed within the catfish industry made filling the increased demand for fishing goods a challenge.

Hopefully the Shortages are Behind Us

At a time when the catfish industry is growing strongly, an unexpected villain entered the picture and robbed catfish anglers of their much-needed equipment. Consumers were more than ready to spend their hard-earned dollars on new equipment, but supplies were challenged by an inability to get the products their customers wanted.

It is no secret that a huge amount of the product sold to anglers comes from overseas and the recent problems in the shipping industry have impacted domestic firms greatly. It started with the COVID pandemic and worsened from that time forward.

The causes of the congestion at our nation’s ports include labor disruptions, infrastructure needs, marine terminal productivity, and many more. Beyond that, the supply chain was and is stressed by a shortage of truck drivers and other problems. Regardless of the reasons, the result of the gridlock is that many catfish product supplying companies did not have product to distribute and important selling seasons were missed for wholesalers and retailers alike.

B’n’M Fishing is a strong supporter of the catfish industry. Long known for their crappie poles, they became an important supplier of catfish rods. Like many suppliers, they began to feel the impact of the supply chain issues in mid to late 2020 when it became apparent that the government’s shutting down of industry create a log jam in everything from production to shipping to manpower. The result was a general shortage of goods and services available to anglers.

“During this time, many sporting events were canceled,” recalled Jason McDuffie, Director of Marketing and Wholesale Accounts Manager at B’n’M Fishing. “Additionally, people started fishing more than they have in 3 decades. This spike in demand created a huge logistical nightmare.”

As businesses shut down, people had more time on their hands and boat ramps across the country started filling up, even on weekdays, as more and more anglers hit the water. They needed more of everything, from bait to equipment.

The crisis continued with ships stuck at sea and unable to unload because warehouses were overflowing and trucks set idle without drivers. Social media was full of posts by anglers worrying about when they would be able to get the boat they ordered or when fishing equipment would be back on the shelves.

“The best option we had was to produce more and book the first available ships and ports,” explained McDuffie. “We have used the same port for years, but this situation made us use multiple ports based on earliest availability.”

The problem received national attention when all the news coming out on the situation showed images of ships backed up and unable to unload at the ports. Further images on the news showed videos and photos of empty retail shelves. The shortages were real and they had grave economic consequences.

“The biggest effect was missed sales,” reported McDuffie. “Not being able to get inventory in a timely manner meant that we had several months with little to no inventory at a time when sales orders were a plenty.”

Companies like B’n’M Fishing couldn’t fill the orders created by the increase in demand and they missed those sales. Fortunately, things are looking better.

“We are making it up now,” concluded McDuffie. “But it sure would have helped to have a continual supply of rods in 2021.”

Pipeline Tackle co-owner Cory Ramsey reported a similar experience during the pandemic. In many cases, account activity with suppliers ground to a halt with some companies responding better than others. The service side of their reel business was slowed down considerably and new product was often difficult to come by.

“We are still seeing a problem today,” Ramsey said. “Common parts for some reels were in and out of backorder. Some reel manufacturers literally shut down their parts service and it was impossible to get through. Other manufacturers would take an extremely long time to get parts.”

Ramsey said that Abu, Penn, and Shimano were the best at getting parts to them throughout the covid pandemic.

“What hit us the hardest was our finished goods account with Pure Fishing,” continued Ramsey. “Reels were impossible to get as every model stayed on backorder for over a year. We could not get a new reel at all.”

Common tackle and gear were also unavailable and made doing business difficult without the normal supply of goods to sell. It was especially hard on many small businesses and many had no choice but to close their doors.

“We were very fortunate to have a service-based shop with a trusted name,” explained Ramsey. “That allowed Pipeline Tackle to continue working and stay in business. We are very proud to say that our accounts are back active and we are currently ordering new reels again. This opens up the other side of our company and allows us to take new reel orders daily as well as stock tackle.”

“Our mom and pop shop made it through the tough times,” concluded Ramsey. “Thanks to our loyal customers, reels kept coming through our shop to be worked on during the pandemic. It’s a slow start but we are well on our way back to what we had before COVID began.”

So, there is some good news and the end may be in sight. The exact timing for claiming victory over the supply chain shortages within the catfish industry remains unsure, but at least the trend is in the right direction.