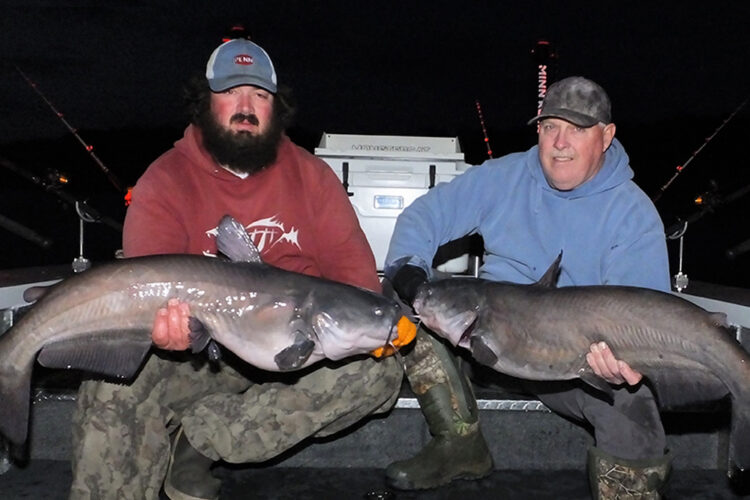 Glory of the Night

Fishing at night from an anchored boat requires a bit more skill to be successful, but anglers armed with the right game plan can catch big catfish after dark.

The warming waters of April signal transition time for a variety of fish species and certainly for catfish. Forage begins to flood into the shallows and the catfish bite adapts and evolves.

Catfish can be active by day or night year-round, but April brings air temperatures more favorable for fishing during the nocturnal hours. And with the right strategy, fishermen can score exceptional catches.

Spencer Hodges from Winterville, NC is a 34-year-old professional guide and tournament fisherman who loves to anchor-down for big catfish during the dark hours.

“I fish year-round but targeting catfish during April at night is certainly a favorite time,” Hodges said. “I prefer an anchored setup for this and I tend to catch bigger fish when anchored.”

Hodges (Purrfect Kitty Guide Service-336-469-0177) fishes multiple lakes and rivers in pursuit of big catfish and is a professional guide on the James River in Virginia during the fall and the Santee Cooper lakes in South Carolina the remainder of the year.

“The basic premise for April night-fishing holds true for most lakes,” he said. “I’m looking for transitional patterns where catfish move shallower to feed at night. Specific depths vary from lake to lake.”

Hodges said his favored targets include underwater topographic changes. Points, humps, ledges, and channel junctions are a few of the typical places he prefers for nocturnal setups.

“I identify travel routes catfish utilize to migrate from deeper daytime hangouts to shallow water feeding areas,” he said. “It may be a long point in a feeder creek, or a ditch coursing through a flat leading to shallower water. One of my favorites is a creek coursing from deeper water that leads back into a shallow flat where a mussel bed or other forage exists.”

Hodges said since he’s hunting actively feeding catfish, the presence of chow for catfish on his target is essential.

“I’m going to fish where I expect catfish to be moving into to eat,” he said. “These are the active, biting catfish that make fishing from an anchored position highly productive. Feeding fish are moving, so an anchored setup with multiple rigs fan cast around the boat is ideal.”

Hodges said it’s crucial to understand that on some lakes the prime catfish forage is not limited to fin-fish species.

“For example, when fishing at Santee Cooper in April I’ve found that mussels and snails are an outstanding catfish attractor, whether finned forage species are in the area or not,” he said. “That’s an excellent food source for an anchored setup, just as are fin-fish, depending on the situation.”

The next step is to specifically identify where he wants to fish along a travel route. He employs electronics to target areas he refers to as ‘pinch points’ where he can effectively fish a narrow travel route, or funnel, that catfish use to move into and out of a larger feeding area.

“Large catfish travel along identifiable routes such as creeks, ditches, and ledges,” he said. “When I find a ‘pinch point’ along that travel route leading from deeper water to a known food source, I can set up on that travel route with confidence, especially if I’ve marked fish on my sidescan graph mode in the deeper water.”

“I’ll get on the water before dark and scout areas to identify fish in the feeding areas,” he said. “If no ‘pinch point’ is obvious, I’ll find an area along a ledge or underwater feature where multiple catfish are clustered nearby and set up on those fish.”

By the time it gets dark, Hodges said he’s securely anchored and fishing.

“My experience is that the last hour of fading light and the first couple of hours after dark are prime time for feeding catfish,” he said. “If I’m in the right spot, the action can be sensational. If the action slows or doesn’t pick up, I’ll move after an hour or so, but I give the fish time to find my baits.”

Bait can be specific to a given fishery and usually, a primary forage from that lake is ideal. Hodges uses an assortment of baits of various types and sizes to determine the best offering on that specific night.

Proper anchoring is crucial to success. He employs the two-anchor method and securely anchors off the bow and stern, into the wind, to hold the boat steady.

“I want the boat stable so I can fish specific areas where I’ve marked fish,” he said. “If it’s windy, and I like to fish in the wind, the boat may sway a little but the anchors will hold my position and I can fish effectively.”

Hodges said the fishing action may occur in flurries and it’s not unusual to have multiple fish hooked at one time, often followed by a lull. If the lull becomes lengthy, he’ll pull anchors and set up again, often in the same general area.

“I may only need to move a short distance to find more feeding fish and we’re back in business,” he said.

Hodges limits his use of lights at night once anchored. Some light is essential to see his rigs, change bait, and unhook big fish He prefers black lights or soft lights, such as red, to illuminate well enough to accomplish these tasks.

“I’ll have the lights pointing up to illuminate the rigs, not directly on the water,” he said. “Plus, I’ll keep noise in the boat to a minimum.”

“Knowledge of the catfish connection to various food sources that concentrates catfish into small areas specifically to feed can lead to exceptional fishing action,” he said.

If you’re looking for trophy catfish or plenty of rod-bending action, drop anchors on an April night and discover the dark truth about April night catfishing.