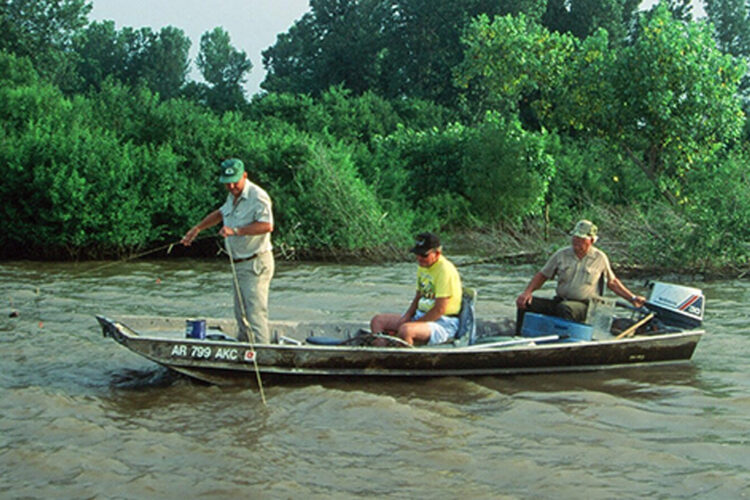 Getting the Drop on Giant Catfish

Trotlines are a time honored-tradition in many parts of the country.

Talk about the ultimate tug-of-war.

Jake Allman yanked on the trotline he and his friends set, and something big yanked back even harder.
After a few minutes of give and take, Allman had sore wrists as he finally pulled a giant flathead catfish to the surface. But the fight wasn’t over.

As the angry catfish wallowed, spraying water in all directions, Allman called for reinforcements. His two fishing partners joined in, and it was all they could do to wrestle the flathead into the boat.

Later, they lifted the muddy-brown fish onto a scale and watched it bottom out the reading at 57 pounds.

Another day, another huge flathead.

That’s life in big-cat country. Allman, a longtime fisheries biologist for the Missouri Department of Conservation who is now retired, and his friends get together each spring to set lines on Smithville Lake in northwest Missouri.

Allman once managed the reservoir, so he knows what lurks in the murky 7,190-acre impoundment. He also knows that trotlines are the best way to get the monsters out of there.

“Some of the places we fish have so much brush, logs and rocks, it would be hard to get a big flathead out of there on rod and reel,” Allman said. “These big flatheads are structure-oriented. They like to bury in the thickest stuff they can find.

“But you can get them out of there with a trotline.”

Allman uses stout trotlines made of up to 300-pound test braided line for the main line and 150-pound test for the droplines. He and his friends tie the ends to a stump or flooded tree, then use a weight in the middle to sink the line.

The number of hooks allowed on trotlines varies from state to state, but Allman and his friends often only bait up to 10 per line.

Some devout catfishermen complain that using trotlines or bank lines is cheating, even though it is a legal way to fish in most states. They say that using a line with multiple droplines and keeping the bait in a stationary place for hours is far easier than using rod and reel.

But Allman will tell you it isn’t as easy as it looks. As in any type of fishing, you have to determine the best place to drop your bait, he said. And you have to know when and where to go.

In catfish-rich Missouri, running trotlines is a time-honored tradition. Good ol’ boys get together once the water turns warm and they set lines in rivers and reservoirs. And they pull out some huge fish.

In 2015, two alternative-method state record fish were caught on trotlines in the Missouri River—a 120-pound, 8-ounce blue catfish and a 100-pound flathead.

Early each June, Allman and four of his friends set out to catch a fish of that stature. “Our goal is to catch a 100-pound fish,” Allman said.

They keep a few of the flatheads for fish fries, and release the rest.

In the spring, the big fish often move shallow, feeding and searching for nesting sites. Allman likes to boat back into timbered coves and set his lines at the end of laydowns in 4 to 5 feet of water.

Unlike some fishermen who run lines, he tries to keep his bait just a few feet beneath the surface when he fishes in the spring. He often targets secondary points with brush or timber. He also finds flatheads along rocky banks with timber and in beaver dens.

In the summer, he and his friends will set trotlines off channel swing points that have timber and brush. But the trick there is to make sure the bait is suspended above the thermocline.

Allman and his friends also set lines on the Missouri River and its tributaries. They have caught big flatheads in the rivers such as the Grand and Platte rivers and big blues in the Missouri.

In the big river, he likes to target the water below wing dikes and the end of a section of rip rap where it comes off the bank and forms a trail dike.

The best bait? Bullheads are flathead candy in Allman’s opinion. But he also uses green sunfish, other panfish or shad. “In the absence of other bait, goldfish will work, too,” he said.

Once a good spot is located, Allman will go back there year after year and catch fish.

“Years ago, we were doing a program for a Girl Scout troop and we wanted to get a ‘Oh, wow!’ type fish,” he said. “We rolled several big flathead electrofishing at this one spot.

“Well, years later I remembered that spot and we set a trotline there. The habitat hadn’t changed much and that spot still held big flatheads.”

That came as no surprise to Allman. Surveys by the Department of Conservation show that flatheads are homebodies.

He cites one study by the Department of Conservation. Fisheries biologist shocked up flatheads on the Missouri River and equipped them with radio collars, then followed them with telemetry equipment. The intent? To see how far up tributaries, they would go to spawn.

But to biologists’ surprise, the majority of the flatheads strayed no more than one mile from where they were caught.

They’re very territorial,” he said. “Once they find habitat they like, they’ll seldom stray far from home.

“We’ll return to places where we’ve caught fish in the past and catch them there year after year.”

But contrary to what some catfishermen believe, there are no guarantees when using trotlines.

“We’ve had times where we will go two nights without catching a fish on one trotline,” Allman said. “We talk about moving it, but always decide to leave it where it is and it pays off on the third night.

“Even on good nights, you’re not catching a lot of fish. I remember my first time I tried trotlining with a friend of mine. We only caught three fish that night, but that was enough for a fish fry for 12 people.”