Birth of a California Catfishing Tournament 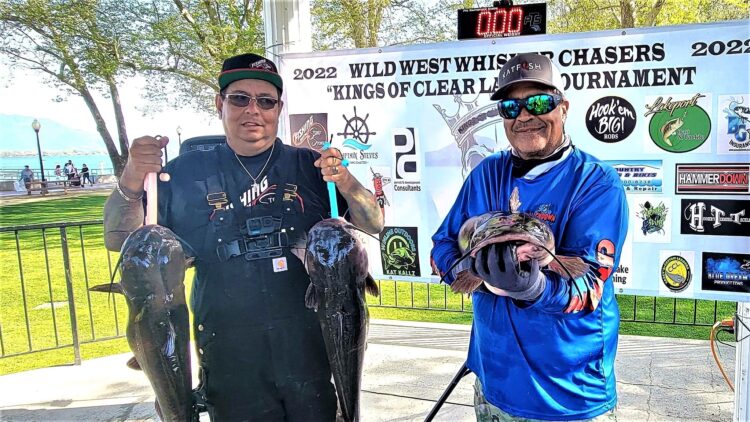 Steve Johnson and Stoney Meagher teamed up to win the Wild West Whisker Chasers “Kings of Clear Lake” tournament with a two-day bag of 6 channel cats that averaged more than 18 pounds each.

I don’t hear a lot about California catfishing. My first encounter with a California angler was Steve Johnson. He is a passionate catfish angler and one of the first to make the long journey from his state to where some of the bigger catfish tournaments are held. His first one was in 2016 when he made a long trip to Texas to fish a KingKat event.

Recently my interest was piqued again when Steve contacted me to tell me he had won a tournament in California. He was very excited and proud of the win since it had been a while since he won a tournament. He and his fishing partner, Stoney Meagher, claimed the win with 57 pounds in three fish on day one, and with hard work, added 53 pounds on the final day to pass the 100-pound mark for a two-day weight on 6 channel cats.

I discovered that the Wild West Whisker Chasers “Kings of Clear Lake” tournament that Johnson and Meagher won was directed by Billy Wynn. An avid catfish angler himself, Wynn has been dabbling in the tournament scene for several years, but there haven’t been that many tournaments to fish.

“We have always had our annual catfish derby,” said Wynn referring to the Clear Lake Oaks – Glenhaven Catfish Derby which has been going on for more than 30 years. “I have fished it several times along with many of the smaller tournaments we have had.”

“Then, I think it was 2018 when I noticed a flyer at a bait shop for a new catfish tournament. It was called Clear Lake Catfish Clash. It was put on by Daniel Fountain of Hook’em Big Rods and a guy named Steve Johnson. I ended up taking 3rd place and Big Fish in this tournament.”

Wynn was always looking for another tournament to fish when Eddie White with Fish Hard Industries produced a tournament in 2020 and followed it up with another in 2021.

“I fished both tournaments,” recalled Wynn. “I placed second in the first one and fourth in the second one. I mention these because I really liked the way these tournaments were run. Conservation was high on their priorities. They actually cared about the fish.”

Along came COVID and other disruptions that caused tournaments all across the county to be canceled. The Fish Hard tournament never returned but Wynn’s passion for catfishing was leading him into tournament directing.

Soon another pro-type tournament appeared on the scene. It was a California catfishing series with several fishing dates, a points race, and an Angler of the Year competition. The first event would be directed by a name familiar to me, Steve Johnson.

Johnson directed the first tournament but with more interest in fishing the tournament than directing, he asked Wynn to take the helm.

“Steve asked me if I would like to take over the tournament,” recalled Wynn. “I did not hesitate. I came up with the Wild West Whisker Chasers name and off we went.”

Wynn ran three tournaments with a plan to do two more before completing the AOY competition. Unfortunately, the drought was hitting California hard and Clear Lake was getting low with several public boat launches closing. Wynn had to cancel the remaining tournaments.

“In June of 2021 I came up with the idea to put on a tournament with Lakeport Bait and Tackle,” said Wynn. “It took me a while to come up with a name for the tournament, but when I did everyone I asked, liked it. “Kings of Clear Lake” was born.”

The tournament allows up to three men per boat. Wynn made it a two-day tournament to add the pressure of consistency to the competition. Anglers have to perform well on both days if they make it to the winner’s circle. With the first Wild West Whisker Chasers “Kings of Clear Lake” in the books in April of 2022, Wynn revealed his thoughts and ambitions for the tournament.

“I want to provide a fun, friendly, safe, and competitive event for my anglers,” stated Wynn. “I want to get them hooked like I was hooked. I would like to reach out beyond the normal group of anglers that fish our tournaments around here. I would like to grow catfishing tournaments here in California to be as big as they are back east.”

By all indications, Clear Lake is among the best channel cat fisheries in the nation. The recent weights posted in April proved that. Both first and second-place teams recorded more than 110 pounds in 6 channel cats—more than an 18-pound average.

“I want our lake to be viewed more than just a bass and crappie destination,” concluded Wynn. “And I want to educate people about catfish conservation and why it is important to take care of the fish in our lake and the state of California in general. I want people to look at catfish as a sport fish and give them the respect they deserve!”

Interested anglers can keep up with Wild West Whisker Chasers and other local events by visiting the Facebook group, Clear Lake Catfishing.