KingKat on the Cumberland River — How They Fished 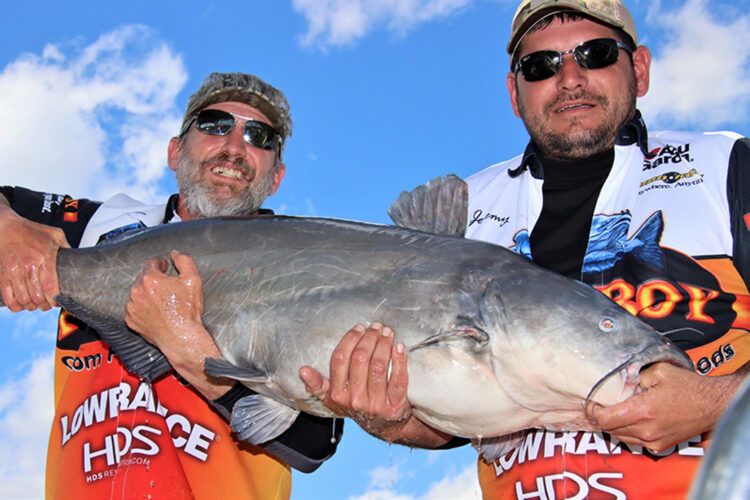 The season kicked off in Clarksville, TN on the Cumberland River. Anglers were greeted with inclement weather that included a cold front, freezing rain/snow, and extremely windy conditions so the anglers had their work cut out for them.

The weigh-in stage was managed by emcee Kevin “Stump” Grant while other members of the team including Lisa Gail Haraway, Scott Peevy, Cory Jeffers, and Trevor Justice teamed up to handle various other duties required for a smooth and efficient weigh-in.  They also conducted a Kid’s Rodeo on Saturday morning. 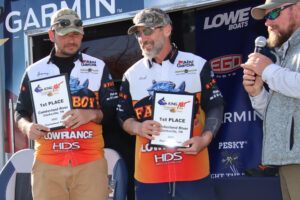 The top spot at Clarksville went to two-time KingKat National Champion and four-time Angler of the Year, Carl Morris Jr., and his stepson Sean. The Ohio team brought 89.72 pounds to the scales in a three-fish limit to earn the first-place honors.

“It was a tough few days of fishing with the wind, rain, and hail on Friday,” recalled Carl. “It made prefishing and looking for fish less than ideal.”

Nevertheless, the father/son team put together a pattern on Friday. They were finding fish in 25 to 30 feet of water, in timber and mud. They decided to begin tournament day on the rope.

“The fish didn’t seem to be on any rock at all,” said Carl. “They were really scattered. We would find a couple here and a couple there, so we did a lot of marking and learning the water.”

“We ended up spot locking/anchoring all day,” continued Carl. “We had the first fish in the boat at 6:41 when Sean landed a 55-pound blue. We caught smaller fish the rest of the morning and ended up getting into some better ones about lunchtime.”

They stayed on the move all day, catching a fish or two in one spot and moving on to another. By the end of the day, they had put 10 fish in the boat. They said small bait was the key for them and they caught most of their fish on small skipjack chunks.

“We had a great time at the tournament,” concluded Carl. “I am looking forward to seeing what Bob Denen, the new owner, does with the trail. “We always loved fishing the national trail on different waters each time. It presents new challenges from lakes to rivers and makes us have to be able to compete by catching channels, flatheads, and blues all across the country.” 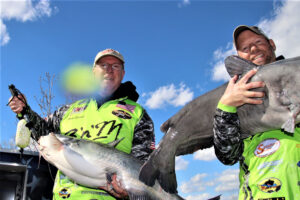 The runner-up spot went to B’n’M Poles Pro-staff anglers, Ryan Lawrence and Mark Blauvelt. Lawrence from Tennessee and Blauvelt from Ohio weighed in a three-fish limit of 84.79 pounds to claim second place.

“It was definitely a tough day,” commented Lawrence following the tournament. “Friday brought in a cold front with freezing rain/snow/rain mixture. It was 35 degrees on Saturday when we hit the water.”

The B’n’M pros witnessed very little current all day. The wind was light enough in the morning to give them a couple of hours where they could anchor up on woodpiles and catch their first fish before the wind dictated a different plan.

“The wind played a huge part of our strategy for the rest of the day,” continued Lawrence. “It was blowing hard in the 15-20 mph range. Everything became difficult to do. We struggled for the next several hours.”

Just before noon, the team decided to break out the B’n’M dragging rods and set out the planner boards. 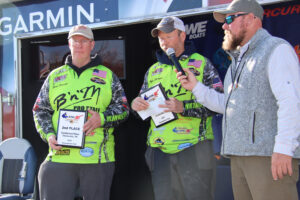 “We got out the Original Clearboards and pinned on fresh-caught skipjack to our 10/0 Daiichi hooks,” explained Lawrence. “It was not easy dragging on the Cumberland. We were constantly hung up. We kept fighting through the hang-ups and managed to land 6 fish on the day and weigh a 3-fish limit.”

“I think being able to adjust tactics and techniques as the wind picked up was the key to our success,” confirmed Blauvelt. “You have to think outside the box. In that valley, the wind just howled upriver no matter where you were. Then the big gusts were a crosswind. Many people were locked into anchoring but with little current and heavy cross and upriver winds we were able to work with the wind instead of fighting it and were able to find some good fish dragging.”

“The KingKat staff did a great job,” concluded Lawrence. “From the captain’s meeting on Friday night to the event on Saturday. Everything went smoothly. I’m planning to fish several more.” 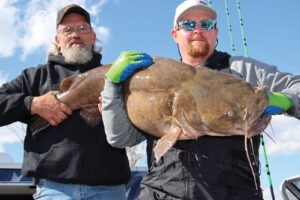 Doug Smith and Chuck Woodall claimed the third-place spot with 69.87 pounds. Their bag included the Big Kat of the tournament at 59.39 pounds.

On tournament morning, Smith and Woodall set out to find a spot with enough current to anchor fish for the first hour. They were worried about the winds that were forecast at 12 to 15 miles per hour as the day went on. Woodall was sure that the morning bite would be crucial.

“It looked like we weren’t gonna’ even get a bite,” said Woodall. “Then all of a sudden my rod went down and the reel started screaming. I began to reel the fish in but couldn’t budge him. He almost spooled me. So I tightened the drag and started slowly cranking on him.”

The team got the big fish in the boat and estimated it to go about 50 pounds. The big cat pulled the scales to 59.39 pounds at the weigh-in, making the anglers even happier. Big Kat of the tournament came to the boat about 7:00 am on a big body section of cut skipjack. 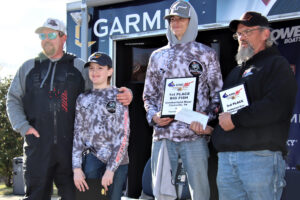 “After the big fish Doug caught a 10-pound blue,” added Woodall. “That was about 7:10 am. After that, we couldn’t get a bite no matter what we did or how we fished. We fished with the nose of the boat on the bank, we drifted baits, we spot-locked, and we double anchored with no luck the rest of the day.”

“We’d like to thank Cabela’s KingKat for producing a great event,” concluded Woodall. “We are looking forward to many more. I’d also like to thank all the companies that keep me supplied with trophy cat tackle. They include Mad Katz, Rock Creek, LLC (aka Rodzilla Rod Racks), Monster Rod Holders, and Maci’s Fish ‘N Finds.”

Rounding out the Top Five

It was tough weather for fishing, but tougher catmen and women stayed the course. The first event of the season had 21 of 35 registered boats weighing fish on a really tough bite.

“We want to thank the city of Clarksville for a wonderful tournament weekend,” said Denen. “We are thrilled with the turnout, the fish that the beautiful Cumberland River provided, and the weights we saw brought in. It’s a new day in the KingKat Tournament Trail and the best is yet to come!”