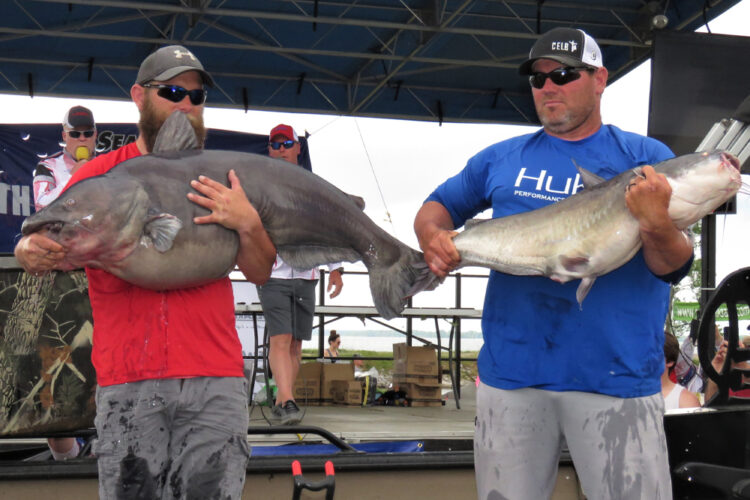 Tournament winners Craig Norris and Tyson Burnett had a bag of 135.29 pounds
that included the Big Fish of the tournament at 86.42 pounds.

An 86.42-pound blue cat anchors the winning bag on Wheeler Lake in Alabama.

One hundred eighty-three teams from 22 states launched at Ingalls Harbor in Decatur, Alabama to compete in the 2022 SeaArk Boats Owner’s Invitational Catfish Tournament. That translates to more than 400 anglers under new rules that allowed 3-member teams. The April 30, 2022 event offered more than $100,000 in cash and prizes to competing anglers.

The weigh-in went smoothly with plenty of SeaArk company staff and prostaff anglers providing the labor. Jason Masingale and Doug Rice handled the stage duties and Daryl Masingale was charged with measuring fish and making sure legal requirements were met.

Boats with good weights came to the scales and those that didn’t think they had a winning weight could choose to check in their fish without going to the scales and still be included in the drawing for the ProCat 200 giveaway boat and also be eligible for a $500 bonus drawing.

When the total weights were tallied it took more than 135 pounds in 5 fish to claim first place.

The top spot went to Craig Norris and Tyson Burnett. They brought a total weight of 135.29 pounds to the scales. Their bag included Big Fish of the tournament at 86.42 pounds. Their bag consisted of 3 blue cats and 2 channel cats.

Norris and Burnett began their Wheeler Lake quest by traveling from Kansas to Alabama on Wednesday to do some prefishing and set a strategy for tournament Saturday.

“We started our fishing adventure on Wednesday,” noted Norris. “We caught six fish but the biggest was only 20 pounds. We caught about the same number on Thursday and they were still averaging only 20 pounds.”

With tournament day approaching, they took a whole new approach on Friday. They studied their Navionics maps and contour lines to choose some new locations.

Norris and Burnett were using the biggest skipjack body sections they could dig out of the cooler. They targeted ledges by setting up out in the middle of the channel and pulling into the most structure they could find. Their fish came from water that ranged from 10 to 30 feet deep.

“We caught 7 fish over 40 inches long on Friday,” recalled Norris. “We had a few small ones too so we knew we were on to the right track. We began Saturday exactly where we finished Friday afternoon. The first bite came at 9:00 am, a nice under that weighed 25 pounds.”

They waited another hour for the next bite. It was about 10:00 am when the Big Cat Fever Rod had the look of being snagged.

“I gave it a pop or two trying to free it from what was holding it,” explained Norris. “Then I realized it wasn’t a snag. It turned out to be my new personal best 86.42-pound blue cat. The battle was not too long but it was a wild one with rods and drift socks in the way. After we landed him we decided to beat down that ledge and structure for the rest of the day.”

Their decision to stay in that area resulted in 3 more channel cats before the bite completely shut off at about 11:00 am. They caught 6 fish on the day.

“As always, putting in the work and spending the time on the water was key,” added Burnett. “We had found some fish, stayed on them, and just got lucky enough to get the bite we needed on tournament day. With that said, having good equipment when that bite comes is a necessity.”

He was referring to Parks Planner Boards when he mentioned good equipment. He explained that they helped the team locate fish by covering a lot of water in fewer passes.

“I want to give a big shout out to Kevin Parks and his planer boards too,” added Norris. “They were a huge part of our success. We were dragging baits all week long.”

“I’m going to say it one more time,” concluded Burnett. “Luck has a lot to do with when or if you get the big bite.”

The runner-up spot went to Andrew Hargrave and Ron Brown. They teamed up to bring 128.05 pounds to the scales, including a 49.95-pound trophy blue.

Being big river fishermen, their strategy was to fish big waters in the tournament. They began prefishing and eliminating water before tournament Saturday.

“We are primarily  Mississippi and Missouri River fisherman,” said Hargrave following the tournament. “We felt more comfortable fishing the upper portion of the river where we just related things we saw on Wheeler to places where we have had success back home. We spent most of our week scanning and not fishing places we thought would produce on tournament day.”

When tournament day rolled around Hargrave and Brown began dragging baits in locations where they had marked some big fish. They were using planer boards to cover water and were baited with skipjack. Their first stop produced 4 unders and 2 overs by 9:20 am.

“Things slowed down so we moved to our next spot,” reported Hargrave. “The second spot was a dry run. We moved again to our final place for the day where our big fish came to the boat.”

While they reeled the big fish in and proceeded to net it, they had two other rods bending over but they just ignored the other rods and concentrated on the big fish.

“We passed on the other rods because we knew this fish was worth it,” explained Hargrave. “Once it was in the boat we reeled the other lines up and realized those two fish were still on, plus another one that we never saw hit. Those three fish were smaller than what we had so they all got released immediately.”

Other Winners (20 places were paid)

The Second Annual Lynn Lange Award for Top Female Finishing Female went to Tina Engberg. This award is given in honor of Mrs. Lynn Lange, an avid catfish angler who helped pave the way for women in the sport of catfishing.

The tournament also gave away a new SeaArk ProCat 200 with Suzuki DF200ATX engine and Marine Master Trailer valued at $65,000. To be eligible for the drawing anglers had to weigh or check in one live catfish (blue cat, flathead, or channel cat).

Three names were drawn randomly from all the tournament entries and each of the three anglers were given a cooler with a boat key in it. Only one key would start the new boat. The remaining anglers won the coolers and a free entry into next year’s tournament. Brad Doles was first up. His key started the engine and he became a proud new owner of a SeaArk ProCat 200.

When asked his thoughts, he replied, “I don’t think I’m believing this!”

Add it all up and the 2022 SeaArk Owner’s Invitational Tournament was a huge success. It provided the anglers with great food, groovy gear, a great location, and an opportunity to mingle with other SeaArk Boat owners. 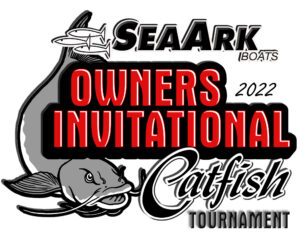 There were a total of 291 fish weighed at the scales at Ingalls Harbor. A total of 4,973.92 pounds of fish were released back into the harbor alive!

“The 11th annual SeaArk Boat Owners Invitational Catfish Tournament went very well,” confirmed SeaArk President Steve Henderson. “The weather was almost perfect and everything fell into place. The bite seemed to slow down compared to earlier in the week but there was still almost 5,000 pounds of fish weighed.”

“The revival station was manned by Justin Conner,” said Henderson. “Between it, the fisherman’s effort in fish care, and the SeaArk livewells, all of the fish weighed were returned alive.”

Henderson joined the many anglers that praised the personnel that professionally carried out the many duties required for a smooth-running tournament.

“I can’t say enough good things about our Pro Staff and the SeaArk Team,” lauded Henderson. “They work hard to make sure that the tournament runs smoothly and their efforts always pay off. I am blessed to have the support of this team. They are the ones that make this event one of the premier catfish tournaments of the year.”

“Congratulations to all of the tournament winners and the winner of the ProCat 200,” continued Henderson. “And thanks to all of our sponsors that made this event possible.  We are proud to be partnered with such great companies. I have to give a special thanks to Suzuki Outboards and Marine Master Trailers for the give-a-way engine and trailer.”

“Finally, thanks to all of our customers for choosing SeaArk,” concluded Henderson. “We hope that everyone enjoyed the tournament and we look forward to seeing everyone next year.”