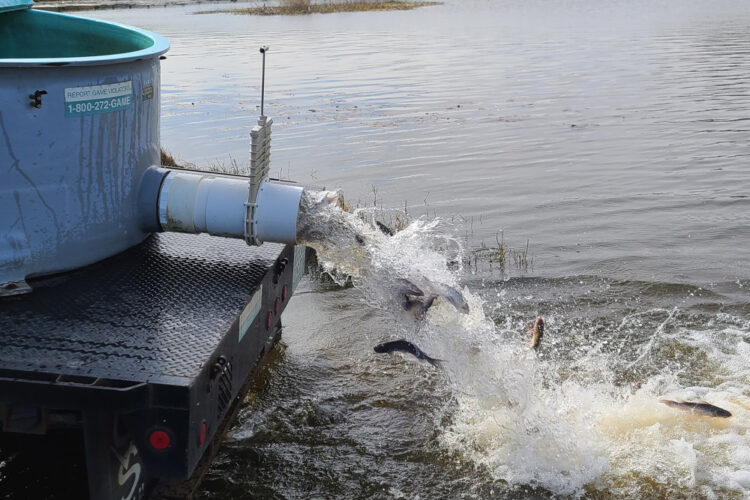 A new project to improve the catfish fishery at Lake Frank Jackson in Opp, Alabama, got underway Tuesday, February 1, 2022, with the stocking of more than 5,000 harvestable-sized channel catfish. An additional stocking of smaller channel catfish is planned later in February.

The catfish project at Frank Jackson State Park is a joint effort of the State Parks and Wildlife and Freshwater Fisheries (WFF) divisions of the Alabama Department of Conservation and Natural Resources (ADCNR).

“The Conservation Department is committed to providing access to quality fishing for all Alabamians,” said Chris Blankenship, ADCNR Commissioner. “Frank Jackson State Park has long been a magnet for anglers in the local community and from across the state. We are excited for the opportunity to improve the catfish fishery at the lake.”

The 1,000-acre Lake Frank Jackson is the main attraction at Frank Jackson State Park. The lake is managed for prime freshwater fishing, including bass, bream, crappie and catfish. However, harvest rates of catfish have declined in recent years.

“Lake Frank Jackson plays an important role in the lives of many in Opp and the surrounding communities,” said State Representative Mike Jones from Andalusia, Alabama. “After receiving several calls from concerned citizens about the state of the catfish fishery in the lake, I reached out to Parks Director Greg Lein and Wildlife and Freshwater Fisheries Director Chuck Sykes to see how it could be improved. This project is a prime example of the great working relationship the Conservation Department has with many communities throughout the state. I am grateful for their quick response to the needs of this community.”

The project will involve a multi-year stocking program and a spawning box program to assist in catfish reproduction and angler catch rates. Channel catfish are cavity spawners. That means they lay their eggs in hollowed-out logs or rocky crevices. The spawning boxes will enhance the natural habitat with additional locations that protect catfish eggs from being eaten by predators.

The spawning box program is being coordinated by Alabama State Parks volunteers Joe Lee and Gary Strickland. If you would like to assist in the program, please contact Joe Lee at (334) 378-9417 or joeleeimages@gmail.com, or Gary Strickland at (334) 504-2444 or samgary@hotmail.com.

The park is also implementing a new daily catch limit of six (6) catfish per angler, per day to decrease the potential of overharvest. Park officials and WFF Conservation Enforcement Officers will monitor angler harvest rates to ensure recovery of the fishery.

In addition to outstanding fishing, Frank Jackson State Park also features picnic areas, lakefront RV camping, a modern bathhouse, a boardwalk leading to an island in the lake and more than three miles of walking trails. Learn more at alapark.com.