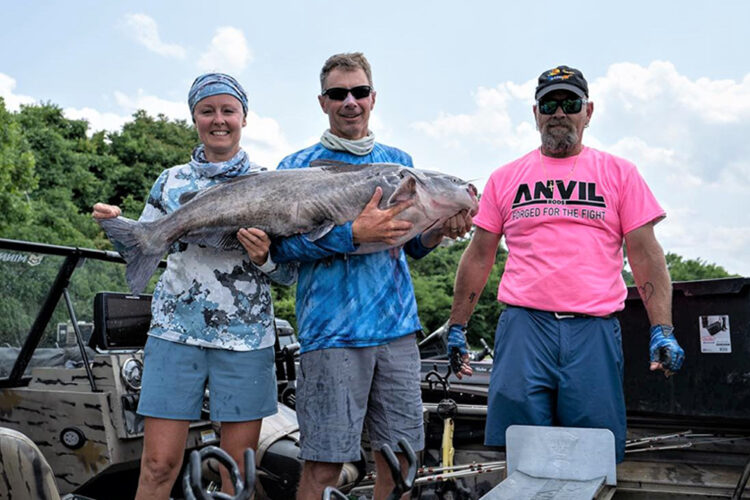 The Bass Pro Shops/Cabela’s KingKat Tournament Trail held its second event of the 2022 season on the Tennessee River at Sheffield, AL after having to postpone the Ohio and Kanawha Rivers out of Gallipolis, OH. They will return to Gallipolis on August 6, 2022.

Nineteen teams from 8 states fished the May 21 event at Sheffield, AL. Anglers were allowed to bring 3-fish to the scales with only 2 over 34 inches. Anglers were greeted with fairly nice weather. The air temps reached the mid-80s by weigh-in time and the water temperature was about 74 degrees with very little current being produced by generation. It was expected that the fish would be in pre spawn mode. As the fish came to the scales some did show the scrapes and scratches normally witnessed as fish begin the spawning process while others were fairly clean. Most anglers believed the spawn had started and did dampen the bite.

The weigh-in stage was managed by emcee Capt. Kevin “Stump” Grant while other members of the team including Lisa Gail Haraway, Scott Peevy, and Trevor Justice teamed up to handle various other duties required for a smooth and efficient weigh-in. They also conducted a Kid’s Rodeo on Saturday morning at River Front Park in Sheffield.

First Place honors went to Joe and Demetria Westbrook. The husband/wife team fished the first KingKat event under new management on the Cumberland River previously where they pulled out a 5th place finish. This time they upped their weight and claimed First Place with 72.84 pounds. They earned a check for $4,000. They also had the 2nd Big Kat for another $500. They were the first team to weigh and sat in the Smooth Move hot seats to watch the remaining boats come to the scales but none could take them out. 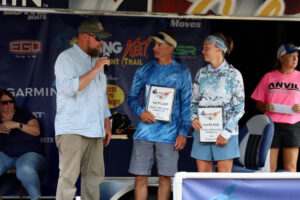 “We watched her constantly throughout the day,” recalled Demetria. “We changed water several times, aerated, and added oxygen at times. We decided to stop fishing at 1 o’clock and head to the weigh in early.”

“We started our week by pre-fishing on Pickwick by Bear Creek,” reported Demetria. “We worked our way to the dam. We caught a few fish—nothing big. We also pre-fished Wilson and only caught a few fish.”

The team’s biggest fish had been only 18 pounds so they began to think of another strategy. Believing that the blues were most likely starting to spawn, or already spawning they chose to fish between Wilson dam and Riverfront park on tournament day.

“The water temp was a little cooler,” Demetria said. “And there was a slight bit of current. We anchored around rocks and trees in about 10-22 feet of water using skipjack and shad for bait. The weather was nice, but hot.

Joe and Demetria had caught their limit of 3 fish by 9 o’clock when they noticed that their biggest fish (41 pounds) was not lively.

As soon as they arrived at the scales with the big fish it was weighed and put into the Extreme Bait Tanks recuperating tank. The trophy cat was burped a couple times and was ready to be released in 10 to 15 minutes.

“We were super impressed with the CPR tank,” concluded Demetria. “Thank you Cabela’s for running a well-organized and professional tournament! Thank you Lord Jesus for blessing us with a win!”

Justin Andrew Fricke, Robert Gilchrist, and Steve Burian had a little excitement in their day as they fished their way to Second Place and big fish of the tournament. The three-man team weighed in a total of 60.09 pounds for the second place bag. It included a big ole flathead at 44.84 pounds to earn them Big Kat of the Tournament honors. The team earned the second place check of $3,000 and added $1,000 for Big Kat. 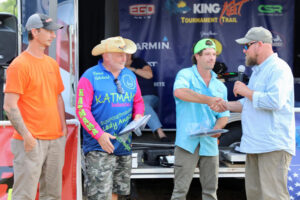 Knowing that the fish were entering a spawning time the team discussed strategy and decided the tournament could probably be won close to the boat ramp. They launched and started dragging boards with Andrew’s Toughest Fricke’N Rods.

“Because of the spawn the bite was starting to stink,” said Fricke. “It’s getting tough. The morning started off hot. We caught the big flathead and a few smaller blues on a hump near the ramp.”

“I knew it would come down to how much time you kept baits in the water,” continued Fricke. “I also knew we had to focus on finding fish. This time of the year, the fish are on the move so for precision fishermen like me it gets tough because they are constantly moving and feeding.”

After Fricke, Gilchrist, and Burian made a few passes near the ramp something in Fricke’s head was telling him to go to the dam. They ran to the dam and dropped some baits in the turbine current. 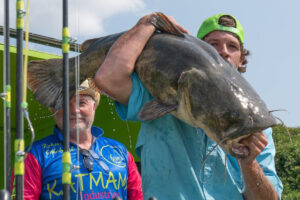 “I don’t know why, but I went with my gut and we headed for the dam,” explained Fricke. “We got there and cast out some baits and got hammered quickly with 2 small fish. Then all of a sudden we heard a SCREAM for help.”

The team discovered a young angler and his father in trouble. The pair were fishing a bass tournament and had gotten caught in the turbine current. Fricke, Gilchrist, and Burian switched over to rescue duty.

“Their boat got high centered and the current pushed the nose under and ejected them,” reported Fricke. “We didn’t think twice as we reacted. We got both anglers into my boat in the rolling current and rocks. After letting them catch their breath we recovered the almost bent in half, older boat. We pumped the water out to get it to float again before pulling them to the ramp.”

TVA shutdown generation and the current slowed shortly after the rescue. It changed the game plan for the rest of the day. The team ran back to the launch area and finished out the day. They trailered up to the scales with a good bag and a better story of the good deed they were a part of.

“We lost more than 2 hours of fishing time,” concluded Fricke. “BUT THERE IS NO MONEY IN THE WORLD WORTH MORE THAN SOMEONE’S LIFE! 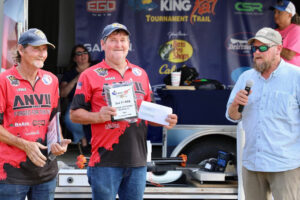 The third spot went to the brother team of Lonnie and Donnie Fountain. The Georgia anglers brought 53.59 pounds to the scales to earn the 3rd place check for $2,000.

“It was a great tournament,” said emcee Kevin “Stump” Grant. “We had 19 boats representing 8 states. We were hopeful that we might see some weights over 100 pounds but due to the spawn and low current flow the bite never turned on for the anglers. Nevertheless we still saw some really nice fish. Big Kat was a 44.84 pound flathead and 2nd Big Kat was a was a blue cat that pulled the scales to more than 41 pounds.”

“We are grateful for the angler participation and the energy surrounding the growth of the KingKat Trail as we move forward,” concluded Grant. “Special thanks to Colbert County and the towns of Muscle Shoals and Sheffield Alabama for sharing their hospitality. Special thanks also to all the anglers and their families. We couldn’t do it without them. It’s a new day at KingKat.”

The next KingKat event will be at Huntsville, AL. Ditto Landing on June 4, 2022.