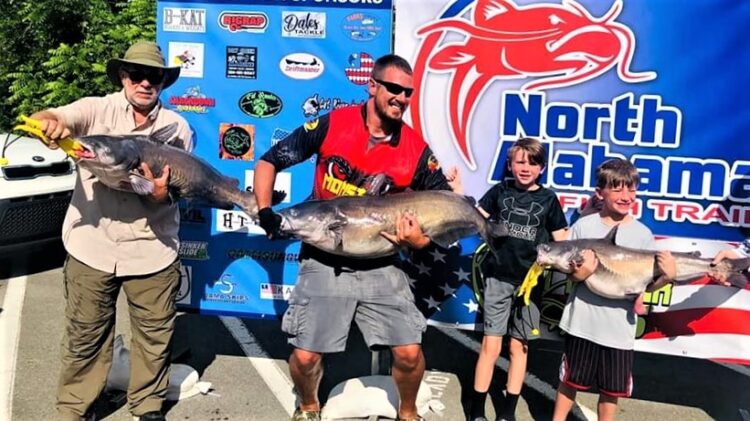 It was a family affair for the winners at the recent NACT event.

The North Alabama Catfish Trail (NACT) is an American Catfishing Association (ACA) affiliated Division 3 tournament. Participating anglers are eligible to compete and enjoy the challenge of fishing against anglers in other areas of the country in the ACA points race.

NACT is also a qualifying trail for Cabela’s King Kat Tournament Trail. Six anglers who fished the Guntersville event qualified to fish the King Kat Classic out of Decatur, AL on November 4th and 5th.

Lake Guntersville was the fifth event for NACT since it began. Guntersville is a great trophy catfish destination and a favorite of many anglers. I made a few memories there myself as it is the source of my personal best 62-pound flathead. Anglers traveled to Stevenson, AL with the opportunity and expectation of catching some big ones. 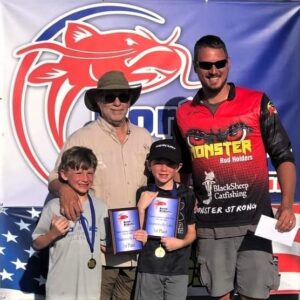 J.R. Hall guided his team of family members to a successful day on Lake Guntersville. In addition to J.R., the team included his two sons Hunter and Logan, and his father-in-law Randy. It was their first time to tournament fish and it is probably safe to say it won’t be their last!

“We started off the morning in some regular spots,” recalled J.R. “They were spots that had produced fish in the past few weeks.”

As can often happen in fishing, the first spot did not pay off. So they moved on to try their luck in fishing hole number 2 but with the same results. No bites. They decided to run 15 miles downriver where they fished some new water that J.R. had never fished before.

“We anchored up on channel ledges in 25 to 30 feet of water,” J.R. said. “We fished a typical Santee rig baited with skipjack. We ended the day with 7 fish and missed 7 good bites. It was enough to put us on top with 102.9 pounds. The rain we’ve had in the past week had picked the current up enough that we anchored all day.”

The missed bites were not unusual or unexpected for J.R. He explained that he was using big baits for big fish and the missed bites are just part of the deal. He used cut skipjack, the king of baits on the Tennessee River.

“I had both my sons on board along with my father-in-law,” concluded J.R. “Hunter and Logan were a nervous wreck because we weighed in at the beginning and had to watch everyone else weigh in. It was the first tournament they had ever fished and now they’re hooked!”

Note: J.R. Hall is the owner/operator of Blacksheep Catfishing Guide Service, LLC  based out of North Alabama where he fishes Guntersville and Wheeler Lake. He practices catch and release fishing as he spends most of the time targeting trophy blue and flathead catfish. No fish under 15 pounds are harvested on his boat.

Mark your calendars for the next event on June 25, 2022. It will be a nighttime event out of First Creek on Wheeler Lake.