Alternative to Fishing the Catfish Spawn 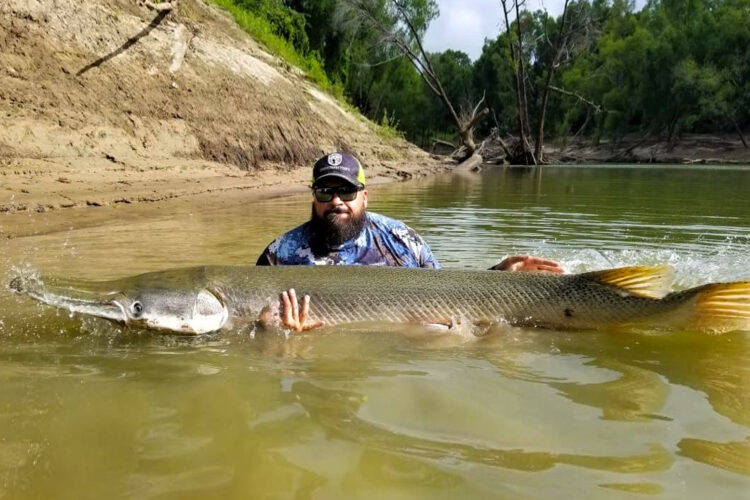 When the spawn is in full swing on catfish waters, the alligator gar offers anglers an alternative adventure.

Considered a trash fish by some, the alligator gar is pursued for sport by others. Having the body of a typical gar and a head that resembles an alligator explains where it gets its name. The fish is known as a top carnivore and is important to the river ecosystems that it populates.

For anglers facing a tough bite during the catfish spawn, this hard-fighting fish may be just the ticket for an alternative fishing adventure. For the most part, anglers can target this prehistoric-like fish with the same tackle they use on catfish but they may have to beef up the mainline and the terminal tackle.

Milton Clos Nieto is a Texas catfish guide (Xtreme Trophy Fishing) and angler who also pursues the alligator gar for sport. He loves guiding for catfish, but he also enjoys pursuing the prehistoric alligator gar.

“Personally just seeing a fish that roamed around with dinosaurs is amazing to me,” commented Nieto. “These toothy creatures are true river monsters. We frequently catch gar that are 7 feet long. The raw power of these fish will astound you. They pull like a freight train.”

The fish Nieto speaks of is found in rivers across the southeastern U.S. from Florida to Texas and into Mexico and can reach weights up to 200 pounds. At one time their range extended further north in the US but they are now mostly absent from those locations.

Historically, alligator gar was not considered a target for most recreational anglers. Nieto has recognized the recreational possibilities of the fish and started guiding for them. In Texas, anglers can keep one per day, but the Texas Fish and Wildlife Commission promotes catch and release (CPR).

Nieto fishes for the alligator gar mostly on the Trinity River from Dallas to Palestine and south to Huntsville, TX. He finds them in sluggish pools with little water flow.

“We look for still or dead water,” instructed Nieto. “Areas that create dead water allow the gar to ambush their prey. They sit there and wait for a baitfish to swim by and they attack.”

Although biologists say that in addition to finfish, alligator gar feeds on things like blue crabs, turtles, waterfowl, birds, and other small animals. Nieto’s go-to bait is fresh carp and buffalo that he catches by cast net and freezes quickly to preserve quality.

“I maintain 3 to 4 freezers full of bait,” Nieto said. “That’s just how much we run through in a season. We use approximately 6 to 8 baitfish on each trip. The carp and buffalo range from 2 to 6 pounds and sometimes as much as 12 pounds. The gar love the big heads.”

If he is not using a big head Nieto likes to cut off the tail and run a fillet knife up towards the head on both sides to produce a butterfly cut. Since he targets big gar he wants big bait.

Gar fishing requires special methods to be successful. Nieto’s experience has led him to use a system that includes strong equipment and stout terminal tackle.

His terminal tackle consists of 4/0 bronze treble hooks, 200-pound steel leaders, and a 150-pound test braided line. The steel leaders are used because gar have razor-sharp teeth. If they nick the braid and weaken it they are likely to break off. No weight is used on his rig.

“We don’t want to hurt the fish,” declared Nieto. “If the bronze hook is swallowed it will rust out in a few days and the fish can gain back its health. We also try to minimize the time of the fight by using the heavy rods.”

He freelines the bait with the reel in the free spool position. Once the bait is cast out, patience becomes an important part of his strategy.

“We fish for them with a free spooling reel,” explained Nieto. “Once they pick up a bait they run with it. The key is to wait until the fish turns around and comes back towards you. At that point, the fish has swallowed the bait and it’s time to set the hook.”

A successful hook set on a trophy-sized gar is a fight of a lifetime. A successful landing depends on the equipment and the anglers fighting ability.

“The fight is intense,” concluded Nieto. “It’s like setting the hook on a freight train. As soon as you set the hook just hold on to the rod and pray that the 150-pound braided line holds. You also have to maintain pressure on the rod and keep the line tight or there is a possibility the fish will spit the bait and send it flying right back at you!”