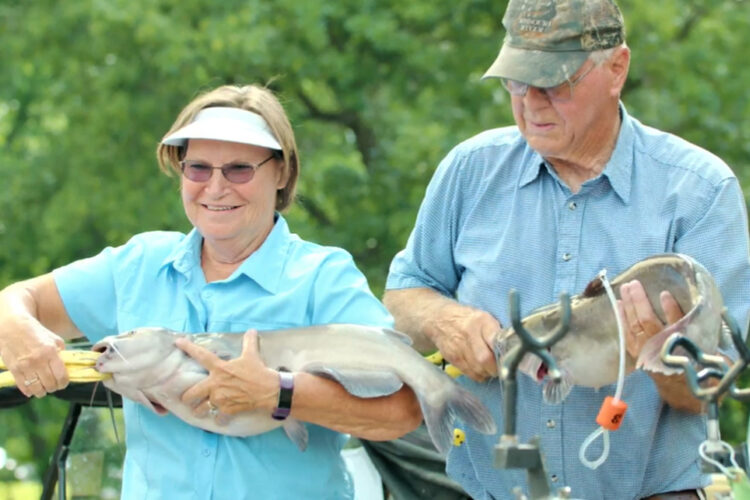 The Bass Pro Shops/Cabela’s KingKat Tournament Trail held its fourth event of the 2022 season on Carlyle Lake at Carlyle, IL.

The weigh-in stage was managed by Grant while other members of the team handled various other duties required for a smooth and efficient weigh-in.

First Place honors went to Ron and Wanda Barner. The husband/wife team are regular competitors on the King Kat trail. Last year at the Classic they won the Lowes Boats One Bite-One Boat/Big Fish Points Challenge. The Missouri couple weighed in 27.79 pounds at Carlyle to take the top spot and earn a check for $4,000.

“We have had a great day,” commented Wanda following the tournament. “The weather was wonderful with a light south wind.”

Ron and Wanda drifted all day into the wind. They were targeting structure in relatively shallow water. They discovered there was only one cut of bait that the fish were liking on tournament day.

“We caught the winning fish in a stump patch,” recalled Wanda. “We were in about 10 feet of water in the middle of the lake. We used cut shad for bait, center sections. The fish would not bite anything else. We caught about 15 fish for the day.”

“All thanks goes to our Lord and Savior,” concluded Wanda. “He is the one giving us the health to travel and chase the catfish. Ron and I want to thank Cabela’s for putting on a great tournament. Mr. Bob Denen and staff are doing a great job. I would encourage all catfish anglers to come and fish with them.

The runner-up spot went to Eric Sasse and Lance Waggoner. They brought a 3-fish limit to the scales weighing 26.32 pounds to earn a check for $1,300.

Sasse and Waggoner used the trolling motor to hold direction as they drifted all day long in what they described as a “challenging wind.” They reported catching most of the bigger fish on the northern end of Carlyle but they fished all over and caught fish all over.

“We were catching 6 to 7 pounders all day,” reported Sasse. “We fished water as deep as 12 feet, but most of our weigh-in fish came from 6 to 7-foot water.”

Carlyle Lake is basically in Sasse’s backyard. He has caught some good channel cats there including his personal best of 26 pounds so he knows the caliber of fish in the lake. In 2020 he won the King Kat event fishing with Levi Sasse and Zac Kopp. He likes to use big baits and often does well on Carlyle Lake.

“We were using 5- to 6-inch shad,” explained Sasse. “We were using big baits for big fish. We were basically using the whole shad. We want to thank Cabela’s King Kat for bringing the tournament to Carlyle.”

The third spot went to Thomas and Timothy Walsh. They didn’t have time to prefish but they still found success. They brought 25.05 pounds to the scales to earn the 3rd place check for $1,300. Their bag included Big Kat of the tournament at 11.52 pounds. The big Carlyle Lake channel cat added $1,000 to their payday.

“Thank you Cabela’s King Kat and all the sponsors,” said Thomas on a Facebook post. “From what I saw this weekend I believe the trail is making a comeback. Very well ran! Congrats to Ron and Wanda Barner on the win and all that placed.”

Fourth Place went to the brother team of Lonnie and Donnie Fountain. No strangers to receiving a paycheck, Lonnie and Donnie traveled from Georgia to fish the Carlyle event. They brought 24.70 pounds to the scales to earn the 4th place check of $700.

“We just couldn’t get the big bite,” stated Doyle as he sat in the hot seats with the lead for a while.

The Carlyle event also featured a well-attended kids’ rodeo. The kids all had fun and caught a lot of fish. The kids fishing rodeo took place at the Dam West Boat Ramp on

Marine Road as the tournament anglers competed on the lake.

“The U.S. Army Corps of Engineers at Carlyle Lake showed us great hospitality,” Grant said. “They have some of the finest facilities that we have visited on the King Kat trail.” “The whole King Kat crew want to send very special congratulations to Mister Ron and Miss Wanda on the win. They are two of the most deserving individuals. Thanks also to all the anglers, their families, and our sponsors.”

The next King Kat event will be on August 6, 2022, in Gallipolis, OH. Anglers will be fishing the Ohio and Kanawha Rivers.