KingKat on the Tennessee River at Huntsville — How They Fished 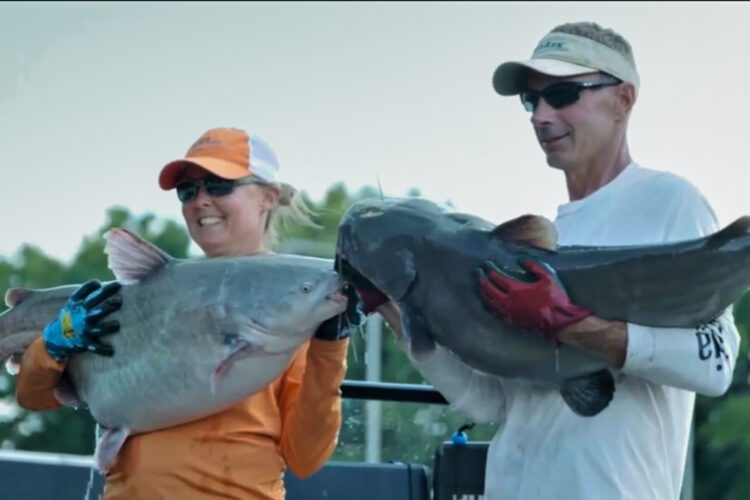 The Bass Pro Shops/Cabela’s KingKat Tournament Trail held its third event of the 2022 season on the Tennessee River at Huntsville, AL. Anglers could fish either Wheeler or Guntersville Lakes as long as they were in Alabama.

Twenty-seven teams from 10 states fished the June 4, 2022 event at Huntsville, AL. The teams launched out of Ditto Landing with some finding tough fishing while others had a great bite. Anglers were allowed to bring 3-fish to the scales with no more than 2 fish over 34 inches by Alabama law.

“Weather conditions were bright and sunny,” reported emcee and weighmaster Kevin “Stump” Grant. “The air temperature rose to around 90 degrees with a little bit of breeze. The water clarity was good with some flow in the river. The anglers that had the most success found their fish in deeper water.”

The weigh-in stage was managed by Grant while other members of the team handled various other duties required for a smooth and efficient weigh-in. They also conducted a Kid’s Rodeo on Saturday morning at Ditto Landing.

First Place honors went to Joe and Demetria Westbrook. The husband/wife team has been on a roll finishing the first event of the season on the Cumberland River in 5th place; winning the second event on Pickwick/Wilson, and winning the Huntsville event out of Ditto Landing this week with a 3-fish limit of 86.13 pounds. Their string of victories has them leading the points race.

“We pre-fished Wheeler before the Ditto tournament,” recalled Demetria. “Since we were familiar with that body of water we stayed on Wheeler for tournament day. We landed our biggest fish upriver from Ditto, but we caught more numbers on the mid-river section.”

The team chose the mid-river section because it was better for dragging bait.

“We have more confidence dragging, and tend to do better when we do,” offered Demetria. “We fished water that ranged from 8 to 25 feet deep but found the most fish in 18 feet on ledges. The weather was absolutely beautiful.”

The team got tested on their first spot of the day. They had a decent fish hooked in the first 15 minutes. Their early excitement turned quickly to doubt.

“We thought this is going to be great,” Demetria said. “We were excited about catching our first fish so early. Then we get him right at the boat and ready to net it and he came off. Neither one of us said a word but we both were thinking the same—It’s just gonna’ be one of those days.”

Joe and Demetria did not let that early event shake them. They just kept fishing. They had their limit and were culling fish by 8 am.

“We would only gain a few pounds with each cull,” remembered Demetria. “We were hoping we could find a really big fish eventually but it never happened. We caught a total of 15 fish on tournament day. We used skipjack and shad for bait with most of the fish caught on skipjack.”

“We are so thankful for the Lord blessing us with another win,” concluded Demetria. “Without Jesus, we could do nothing.”

The runner-up spot went to Bradley Lail and Daniel Champion. Fishing under the team name of Guntersville Bait Company Lail and Champion brought a 3-fish limit to the scales that weighed 83.15 pounds, just about 3 pounds behind first place. Their bag included the Big Kat of the tournament at 45.86 pounds.

Lail and Champion fished Guntersville with a strategy to locate fish that were going or coming from spawning areas looking to rest.

“We fished mostly in water that ranged from 45 to 50 feet deep,” reported Lail. “We were dragging baits the entire day trying to locate actively feeding fish. The weather was around 84 degrees with a water temperature around 79-82 degrees. The bite shut down once the pleasure boaters were too thick.”

“Our bait of choice was fresh skipjack, from a local company,” joked Lail who owns the Guntersville Bait Company. “We caught 12 fish on the way to our 2nd place weight.”

The third spot went to Ron Goucher (REEL EM UP LLC) and Ray Nix. They brought 81.19 pounds to the scales to earn the 3rd place check.

Fourth Place went to Robert Gilchrist (KatMama Industries), Steve Burian, and Justin Andrew Fricke. The same team finished second in the previous tournament on Pickwick/Wilson and also had Big Kat. They weighed 72.21 pounds at Ditto Landing to claim the 4th spot this week.

“We had a great tournament at Ditto Landing in Huntsville, Alabama,” stated Grant. “The Huntsville folks are very hospitable and they have a beautiful waterway. Out of the 27 boats, several had a really tough day fishing. By the same token, several boats had a fantastic tournament day.”

“Everyone is looking forward to continuing the momentum that Cabela’s King Cat has built up,” continued Grant. “We will be in Carlisle, Illinois next weekend. The Points standings should be posted in the next day or two when everyone has traveled back home. We’d like to thank all of our sponsors, all of our participants, the families that support them, and the town of Huntsville that welcomed us this weekend. It’s a new day at KingKat.”

“KingKat has a team of 13 people that come from week to week to put this thing together,” said KingKat owner Bob Denen following the weigh-in. “We couldn’t do it without them. I want to thank them for all the hard work that they do.”