Catching a Cat with a Mouse 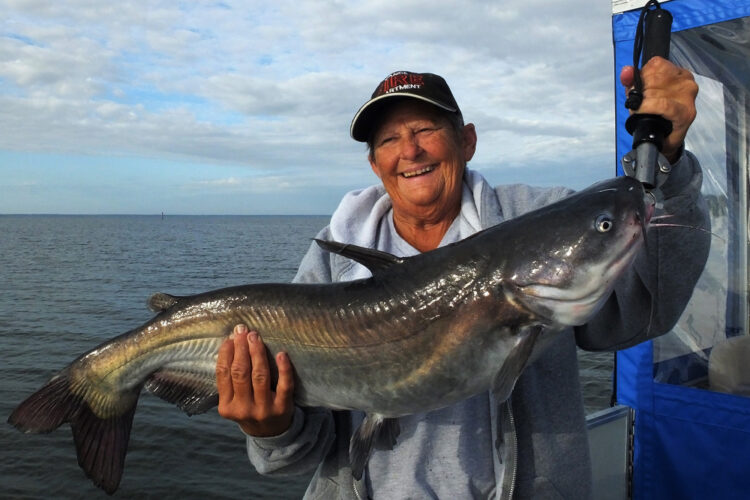 Capt. “Mouse” Witherell loves her job as a full-time fishing guide on the Santee Cooper
lakes and has earned the respect of her male peers. (T. Madewell Photo)

Capt. Barbara “Mouse” Witherell, the only female guide on the Santee Cooper lakes, has earned the respect of her male peers by making consistently outstanding catfish catches.

With a signature moniker of “Mouse”, making a living as a professional catfish guide can lead to some interesting discussions about flipping the script and having a mouse catch a cat(fish).

Capt. Barbara “Mouse” Witherell has been a highly successful fishing guide since 1998.  She is perhaps the best-known guide on Santee Cooper to be instantly recognized with a single-word name, “Mouse”.  Working as the only female guide on the lakes, she has earned the respect of other guides by producing consistent fishing success through the years.

Witherell said the decision to begin guiding was a natural and logical decision because of her passion for fishing. Her late husband, Boudreaux, was her biggest supporter to initiate her leap into full-time guiding.

“I love to fish and was on the water every chance I had, especially since Boudreaux was traveling a lot for his work,” she said. “He said my fishing hobby was getting too expensive and I needed to make some money at it, so I did.”

Witherell said her entry into the professional guiding business did raise plenty of eyebrows as the first, and still only, female fishing guide on the lakes. She said when she started guiding the existing fishing guides formed a betting pool on how long she would last.

“The longest bet by any of them was 18 months,” she said. “That was well over 20 years ago. The funny thing is, many of those in the betting pool don’t guide anymore but here I am.”

She said the nametag “Mouse” was bestowed for legitimate reasons.

“When I was old enough to start dating, I was so small I wore size 3 shoes and people also said I had mousy ears and matching attitude,” she said. “The name fits I reckon and it’s what I still go by.”

She was the catalyst for the creation of the Cajun Guide Service that she shared for years with Boudreaux.

“By 2005 he had grown tired of the road and wanted to start guiding,” she said. “So, I hired him. We fished for catfish a lot at the beginning and we were targeting catfish before catfishing became so cool.”

Witherell (803-492-3381) said guiding taught her that enormous effort and hard work are required to find, and stay connected with, areas holding large concentrations of catfish.

She said narrowing the ‘how-to-catch-catfish’ philosophy down to the basics of finding the favorite food of a catfish is a key to catfishing success. It’s a continuous, year-round process because Santee Cooper offers so many forage options that change seasonally.

Witherell cited shad, both gizzard, and threadfin, as top of the food-chain species but also white perch and bream are favored catfish forage. During the spring, ocean herring migrate into the lakes via locks from the coastal Santee and Cooper rivers, providing a tremendous food source. During the late fall, a large influx of menhaden also migrates into the lakes creating a brief, but highly attractive, forage for catfish.

“Also, we have an abundance of mussel beds, and blue catfish in particular love mussels, especially during the hot weather of summer,” she said. “But mussel beds can be productive any time of the year.

“To consistently catch catfish, I first target what they’re eating at any given time of the year and then figure out the best way to catch them based on the depth and type forage they’re eating,” she said.

During the summer months, her preferred method is to drift fish because it enables her to cover more water and keep up with fish movement patterns.

She calculates wind direction and speed on any given day to keep the boat on a pre-determined course to cover specific underwater targets including drops, ledges, points, and humps. She’ll set rods off the front of the pontoon and drift backward with the wind, using sea anchors as needed to govern the speed.

“I’ve learned a productive pattern can change quickly so drifting is not always the best option year-round,” she said. “At times setting up and fishing a specific target is required. I pay attention to what the fish, weather, and forage are doing to form my daily fishing strategy and I keep my options open.

“For example, if I have a good day on a specific pattern, certainly I’ll begin the next day with that pattern in mind,” she said. “But if I’m not catching fish pretty quick, I’m going to figure out why and make appropriate changes.”

Witherell said she prefers to start the day early and hopes to have a fish hooked by sunrise, especially during the summer.

“It’s not always critical to be fishing at dawn, but the early morning can produce a strong bite, especially during hot weather, but big catfish are likely to bite anytime,” she said. “I want to be on the water early, just in case.”

“These rigs bump the bottom and I’ll use white perch, gizzard shad, and blueback herring as cut or whole baits,” she said. “And I change baits regularly to keep them fresh. We catch mostly blue catfish, but we’ll catch flatheads and channel catfish too.”

“Mouse” Witherell said she fishes with a relentless passion because she cares about her clients and what they catch.

“I’m proud of what I do and I work hard because I enjoy seeing people catch fish, especially their first or biggest fish,” she said. “I love having kids on the boat and the enthusiasm they have when hooked into catfish keeps me motivated to keep working.”

Her guide business website perfectly sums up Witherell’s fishing reputation on the Santee Cooper lakes with the introductory catch-phrase, “Welcome to Santee Cajun Guide Service, where you can always catch a Cat with a Mouse!”