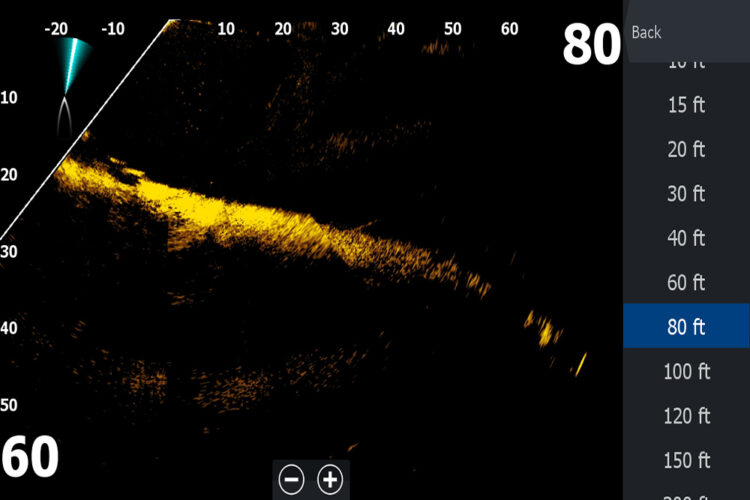 In forward View, anglers can use the Range Line feature to see how far out the
live imaging sonar is set.  (Brad Wiegmann Photo)

Rumor is that catfish can hear your sonar the high-frequency sonar sound waves. Catfish anglers are assuming this because catfish seem to be more spooky whenever the sonar beam marks them on the sonar unit. The truth is catfish have a limited ability to hear high frequencies.

Sound waves are ultrasonic. Humans are capable of hearing sound waves from 10Hz to 20kHz. Most fish can’t hear frequencies above 500Hz to 1kHz.

The sounds that fishes hear are confined to low frequencies (often to no more than 800-1,000Hz, but this is very species-dependent). Dr. Arthur N. Popper, Ahukin.net University of Maryland, Department of Biology.

A quick overview shows that fish get substantial information from the environment around them and provides information from greater distances than their other sensory stimuli. Fish use particle motion that can be measured in terms of displacement, velocity, or acceleration; in addition to sound pressure.

So what are the fish hearing? The obvious things they are hearing are lids being opened and slamming shut, striking your lure or boat into docks, noise baitfish make, wakes striking the side of the boat or shallow water anchors, and even landing or throwing a fish back into the lake fish can hear. The list goes on, but you understand an angler in a boat being in stealth mode is even noise.

I believe that the spooky behavior that anglers are seeing when the unit is in live imaging sonar is caused mostly by trolling motors props and the particle motion and sound pressure they produce.

Trolling motors props create a disturbance with every revolution of the blades through the water. An angler changing direction, reverse to forward, or sudden acceleration produces prop wash from a trolling motor. When props are turning they will even force particles or large fragments into the water column even in gin clear water or around floating vegetation. Plus a prop can also be off-balance creating even more sound fish can hear.

In nature, numerous other sounds are being produced that are louder than the undetectable pinging of your sonar unit. Even in natural environments, the level of ambient noise from natural sources can also affect the ability of fishes to detect sounds (Chapman and Hawkins, 1973).

The fact is, ice fishermen have used sonar to identify fish along with watching a fish bite their lure since they invented fish finders. If sonar sound waves spooked fish away ice fishermen using sonar would have never caught a fish.