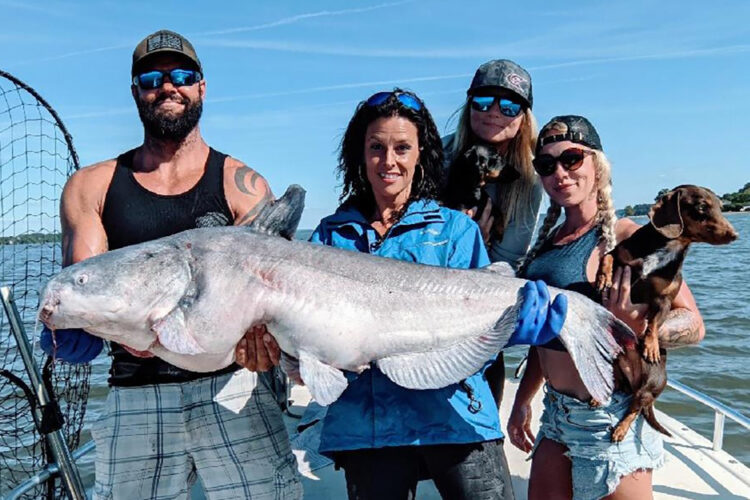 Trophy Tripin’ On the James River

As a lady angler, Samantha Gay is a long-time bass angler but she joined some friends for a trophy blue catfish trip with great success and a new experience.

Samantha developed a love for fishing and the outdoors as a young child from her father and grandmother. She carries that love with her to each new adventure.

“Thankfully, my father’s mother knew the benefits of fishing,” explained Samantha. “She shared her love of fishing with her two sons and eventually her grandchildren. She spent many hours taking me and my cousins to her favorite pond and showing us the ins and outs of fishing.”

Thanks to her grandmother, her father was an avid outdoorsman. Samantha spent as much time as possible fishing and hunting with him and developing her love for the outdoors.

“As I got older, I realized that fishing brought me a sense of peace that I was unable to find anywhere else. I was able to find that peace all over again as an adult when I started back fishing.”

For the past several years, Samantha mainly targeted largemouth bass, but admittedly she is much more than just a bass fisherman and has always enjoyed catching all kinds of fish. In fact, she has a long list of fish on her bucket list for the future.

After receiving the invitation to fish for some big blue cats on the James River she accepted the invite and planned a trip for September of 2021.

The James River
“A couple of good friends of mine invited me to target big blues on the James River,” recalled Samantha. “It was the first time I fished a tidal river and I learned that tides affected where we could stop and fish.”

There was much more to her experience than fishing. She learned of the many fish species that inhabit the James and witnessed much of the wildlife of the area. She also spotted the most bald eagles she had ever seen in one setting. Multiple Atlantic sturgeon made an appearance as they leaped from the water adding another element to her adventure.

“My first experience on the James River did not disappoint,” explained Samantha. “There is so much history tied up in the river and it was very interesting to see the remains of such historic shipping and milling businesses, as well as old plantations.”

The Trip
Capt. Mallory arrived at the boat ramp early to prepare for the trip by setting his net to catch gizzard shad for bait. His rods were rigged and ready with sufficient weight to hold the bait in the James River current.

“With shad on the hooks, he fan cast six rods out behind the boat,” recalled Samantha. “Then it was a sit-and-wait kind of thing. Luckily, our first bite came within minutes of making our first stop.”

Samantha was instructed to take the rod out of the rod holder and get to cranking. After successfully landing her first trophy blue she was instructed on how to properly hold the fish to prevent injury to herself or the fish. They took a few photos of her first citation blue and released it to bite another day.

“I’ve caught a few catfish while bass fishing,” recalled Samantha. “Before that day, my largest catfish was a channel cat that weighed around 12 pounds. I thought that sucker fought hard, but it didn’t even begin to compare to the big blues.”

“Although I’d never fished for big blues on the James River, I somewhat knew what to expect after talking with my hosts about previous fishing trips they’d taken. I felt pretty well prepared for our fishing adventure. What I was not fully prepared for was the sheer power of those trophy blues.”

She finished the day catching six citation-sized blue cats. A citation blue in Virginia is a blue catfish caught on a rod and reel that measures at least 35 inches. The biggest of Samantha’s blues that day was just shy of sixty pounds.

“I’m not sure what I was expecting the fight with such a beast to be,” questioned Samantha. “But it was unlike any other fishing experience in my life. I was in awe of the sheer power of those fish. My body was sore with bruises everywhere but I was amazed by the happenings of the day.”

“Reeling in those big fish was most certainly the best fish fight of my life and unlike anything else that I’ve experienced. I can hardly wait to feel that kind of tug again. However, in preparation for the next trip I got myself back into the gym,” she joked.

Samantha’s first trophy blue catfish trip left her ready to do it again. Future trips produced even better results, including her personal best.

“Since that first trip I have gone out several more times,” revealed Samantha. “I wanted to catch an even larger monster blue. Fishing for big blues on the James River was one of the most amazing fishing adventures of my life. The tug is the drug that gets one hooked on fishing.”

“On one trip we caught 12 big blues, nine of which were citation-sized,” concluded Samantha. “I caught my new personal best blue cat, a huge male weighing 61.9 pounds. Catching these monsters was an exhilarating and exhausting experience, but I loved every second of it. I can hardly wait to do it again!”