Where Did Catfish Come From? 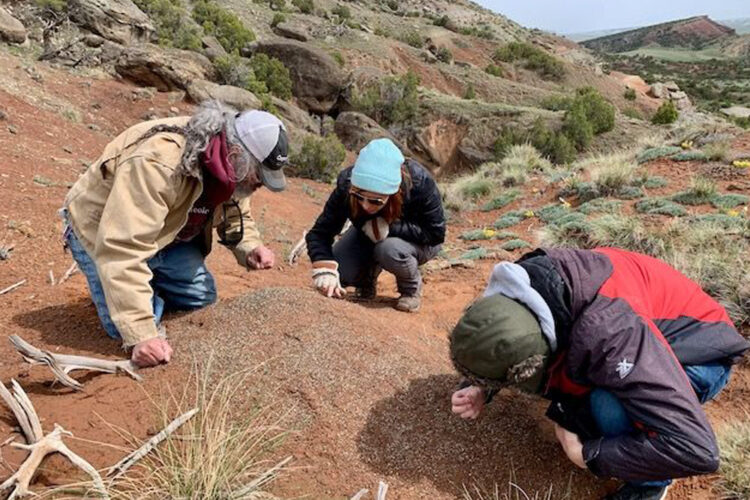 Fish Finds: Uncovering the Origins of the Catfish Family Tree

How evolutionary biologists are using nearly 50-million-year-old fossils for insight into the origins and evolution of catfish.

Staring nose-down at an ant hill on the side of Casper Mountain in Wyoming where dinosaur bones have been discovered, paleontologist Jean-Pierre Cavigelli advises that you never know what you’re going to find.

“I think I just found a shark’s tooth,” said Cavigelli, Collections Manager for the Tate Geological Museum at Casper College.

A shark’s tooth. On a mountain. In an ant hill. In Wyoming!

The idea of such a thing defies logic but it is exactly the kind of random discovery that changes knowledge about how life, the environment, and animals used to be millions of years ago. Wyoming is a hotbed for these kinds of fossil discoveries, and it is one of the only places in the world where prehistoric catfish species have been preserved enough to give evolutionary biologists unique insight into their origins.

What We Know About the History of Catfish

There are 3000 species of catfish around the world that fall into 35 different families.

Approximately 46 of those species exist in North America and belong to the family Ictaluridae which dates to the Middle Eocene Epoch period about 48-million years ago.

The Green River Formation covered three states and nearly 10 million years of time. The sediments and conditions in that region are prime for preserving some of the earliest known examples of catfishes from North America.

Studying the details of modern-day catfish like channel and blue catfish give scientists insight into where the prehistoric Astephus anitquus fits within their evolution.

“I look at these fossils as animals, not rocks,” said Lance Grande, Distinguished Services Curator of The Field Museum in Chicago.

Grande is the author of The Lost World of Fossil Lake: Snapshots from Deep Time (University of Chicago Press) and has collected and studied catfish specimens for more than 40 years.

The telltale characteristics of catfish – peculiar denticular pectoral and dorsal spines, the lack of scales on the body, cat-like whiskers, the lack of makilary teeth in most species, and exceptional sensory ability, fascinate evolutionary biologists as much as they do the passionate anglers who are drawn to the living versions of catfish today.

It is these uniquely shared characteristics among the different species that allow scientists to reconstruct the evolutionary history of catfish.
“We look at modern organisms today and see how genes evolved on a micro level to extrapolate information and explain what led to these patterns,” said Grande. “You don’t have muscles, skin, or color patterns so you have to study the comparative anatomy of the bones to see where the fossils fit in.”

These techniques provide a greater understanding of the fish when they were living, and sometimes lead to revolutionary discoveries that change the course of what we know about them going forward.

An example of this is the catfish family Hypsidoridae (Hypsidoris farsonensis) that Grande discovered based on the details that emerged when taking a closer look at fossils in the collection of The Field Museum. The family is different from any other catfish in the United States in that it has no teeth on an upper jawbone called the maxilla.

The only other catfishes that have a well-developed maxilla with teeth today are species in the South American family, Diplomystidae.

Relation to Catfish of Today

Despite these significant discoveries, there are still only a miniscule number of well-preserved fossil catfish species from North America, leaving many gaps in time and knowledge.

“The fossil record is extremely incomplete. It’s rare to find fossils well enough preserved to integrate into the study of organisms. All you can do is look at shared characteristics. This allows us to build a tree pattern of relationships,” said Grande.

While on location in Wyoming with Cavigelli looking for dinosaur bones he explains that new discoveries, especially when it comes to finding new species, help fill in the information gaps, and sometimes, it leads to more questions than answers.

“New discoveries often help fill in those gaps in the evolutionary lineage of any given group of animals or plants. Sometimes they also provide information showing that previous interpretations might have been wrong,” said Cavigelli.

The Ictaluridae (common names include bullhead, channel or flathead catfish) and Hypsidoridae are the earliest known, well-preserved fossil species of catfishes from North America, but for anglers, why does this matter? Some fossil family species still exist today while others do not.
Generally, anglers’ thoughts when getting onto a body of water are, “Will I top my personal best today?” Or, “What species will I catch?” They don’t ask, “When did the existence of catfish begin?”

“Sometimes finding out where we came from helps us figure out where we’re going,” said Grande. “Some people want to know what happened: How did we get here? How did things that are here now get here? Somebody has to be concerned about these things—they’re attached to our history.”

Basically, we wouldn’t know about the prehistoric catfish unless we had the various species today to “fill in the bones” and vice versa. It’s easy to look at catfish of today and lump them into a few simple categories but it is because of these rare fossil finds (only because so few of them have been preserved enough to study) that we can determine a lineage and branches from where they started. This is how we can separate modern-day catfish into 3000 species.

The findings and research of evolutionary biologists illustrate a symbiotic relationship between learning about the catfish that existed previously and identifying the species that exist today. Both the shared and unique characteristics of catfish that evolved from the families of identified fossils is how we know the various species that we  fish for today.