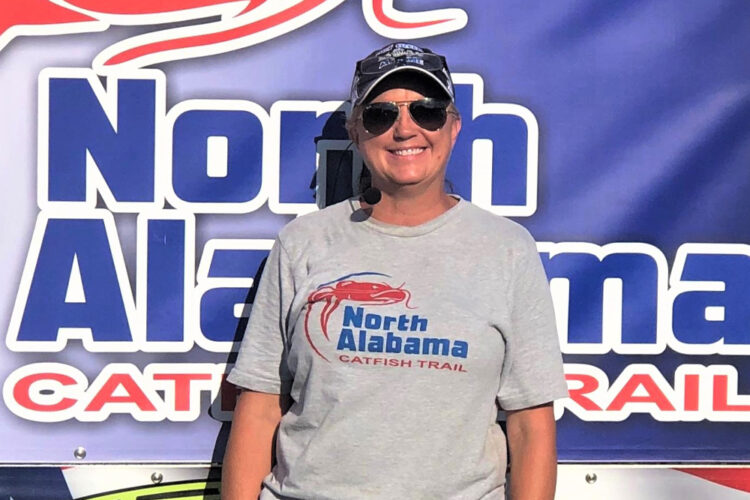 She’s All About the Sport of Catfishing

Lisa Gail Haraway tracks her passion for catfishing back to her Papa Holt, but the person who influenced her most was her husband, Terry. She says that Papa Holt would rather fish than do anything else and her husband is the same way today. Obviously, that passion made its way to Lisa.

There were a few forks in the road that led her to where she is today in catfishing. It all started with bait fishing.

Lisa and Terry operate a bait business called Bama Skips. They split up the duties that get the fresh or frozen bait to their customers. In addition to taking orders, they have to inspect them for freshness, place them in crushed ice, vacuum seal them if they are to be frozen, and deal with shipping and delivery. And they both participate in the fun part, catching them.

“We started bait fishing about 7 years ago,” explained Lisa. “I fell in love with bait fishing for skipjacks. I love the speed and thrill of skipjack hitting that hook. I still love bait fishing today.”

Lisa’s enjoyment of skipjack fishing gave her an urge to try crappie fishing.

“I begged Terry to let me try crappie fishing,” joked Lisa. “I had been told it’s something like skipjack fishing. He said no because it involved tournament fishing and that I would want to chase those tournaments too. It’s still on my bucket list to do.”

Lisa’s catfishing began in 2016 with her husband and a couple of friends. They didn’t even own a boat, but they tournament fished for fun with John Nugent and Robin East.

“Once Terry started taking me catfishing I fell in love with the fish itself,” recalled Lisa. “They amazed me. Everything from their color to their size, to their fight.  Blues are still my favorite but there is always the mystery of what you might have on the line. It could be a blue cat, flathead, or channel cat. It is that thrill and suspense that keeps my adrenalin pumping every time I see the rod go down. I have been addicted to catfishing for 7 years.”

Her addiction to catfishing led her to extend her horizons in the sport. She started thinking about starting her own tournament trail. Encouraged by anglers, and noting adjustments made to local trails that reduced the number of events in Northern Alabama, Lisa decided to respond to her dream.

“I had been wanting to be a tournament director or at least helping on that level for a while,” revealed Lisa. “The opportunity just opened up and anglers gave me the inspiration to follow my dream. I have many anglers backing me and I definitely had the drive so I decided that it was my time to follow my dream and give back to the anglers.”

Since her home waters were Wilson and Wheeler Lakes in Alabama, it was only natural that her new trail would include her home lakes to which she added Pickwick and Guntersville. In January of 2022, the North Alabama Catfish Trail launched under her direction. She wanted to promote catfishing in general and also help it grow by recognizing youth and lady anglers at each event in a family-friendly atmosphere.

“I want to run a tournament trail that everyone feels welcomed at,” explained Lisa. “I want the anglers to come out, have a great time fishing, and at the same time I want to promote the sport of catfishing.”

By all accounts, Lisa’s entry into tournament catfishing was a great success with the North Alabama Catfish Trail. But that wasn’t enough for Lisa. When the KingKat trail changed ownership and they were looking for new staff members Lisa threw her name in the hat. Now she has another title on her resume, administrative assistant at Bass Pro Shops Cabela’s KingKat Tournament Trail.

“My role is to register the anglers, set up the weight programs, and log the weights at the tournaments,” explained Lisa. “And like all the other staffers, just jump in and help anywhere I’m needed before during, and after tournaments. We really all jump in and work together as a KingKat Family. We are an amazing team.”

“We all met at the first tournament and just hit it off,” continued Lisa. “It was weird how well we all came together from different states and felt like family. I think it’s due to the love of catfishing that we all have and the respect for the new owner, Bob Denen, and his mission. He is the perfect leader for KingKat.”

Lisa Gail Haraway has many irons in the fire when it comes to the sport of catfishing. Admittedly, however, the best part of catfishing for Lisa is just being out on the water and that is where her passion is fulfilled the most.

“My major attraction to catfishing is just being out on the water,” concluded Lisa. “I enjoy all the surroundings and the pleasure of taking it in. The peacefulness of fishing is something you don’t find anywhere else except on the water. It includes everything from the animals playing on the shore to the flowers, and my all-time favorite the beautiful sunsets while I wait on the next bite.”