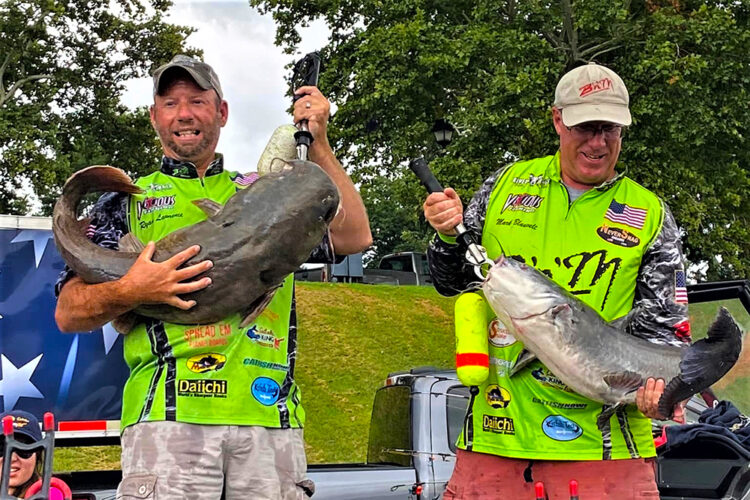 The Bass Pro Shops/Cabela’s KingKat Tournament Trail traveled to Gallipolis, OH, and the Ohio and Kanawha Rivers. Mixed bags of blue cats, flatheads, and channel cats came to the scales.

Thirty-two teams from nine states fished the August 06, 2022 event. The weigh-in took place at the Gallipolis City Park and Boat Ramp where it took a three-fish weight of more than 100 pounds to win.

“Competing anglers fished overcast conditions on a fairly lazy Ohio River,” reported emcee and weighmaster Kevin “Stump” Grant. “More than1,300 pounds of Ohio River catfish were brought to scale. We saw some of our biggest bags of the year at the Gallipolis event where we paid out $9,500.”

The weigh-in stage was managed by Grant while Lisa Gail Haraway and other KingKat team members handled the various other duties required for a smooth and efficient weigh-in.

B’n’M pro-staff anglers Mark Blauvelt and Ryan Lawrence teamed up to fish the event. Blauvelt described the fishing conditions that greeted the anglers.

“We were met with overcast skies most of the day,” reported Blauvelt. “Air temperatures rose to 83 degrees and we had a hard rainstorm early afternoon. The water level was a little high but falling after the big floods in Western Kentucky last week. The current was about 1 mph  but that was a good amount of current for that area for this time of year.”

“We got most of our fish suspend fishing in deep water,” concluded Blauvelt. “We were using fresh skipjack for bait.”

Blauvelt and Lawrence finished the day with nearly 100 pounds (96+) and finished in 4th place. They followed behind the top three teams where the first and second place teams weighed more than 100 pounds in three fish.

First Place honors went to Cory Jeffries and Jerrett Horsley. They brought a total weight of 113.2 pounds to the scales to claim the top spot. Jeffries and Horsley were the first to weigh in and stayed in the hot seats the entire day as other anglers failed to top their impressive weight. The biggest fish in their bag weighed 43.67 pounds.

The runner-up spot went to Ronnie Duncan and Frank White. They teamed up to bring a total weight of 106.68 pounds in their 3 weigh-in fish. Their bag included Big Kat of the tournament at 51.05 pounds. They were just 7 pounds short of knocking out the top team.

Michael Ramey and Cody Williams brought 3 fish to the scales that weighed 99.76 pounds to hold down the third place spot. 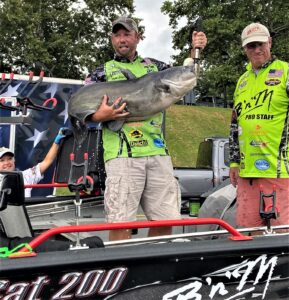 Ryan Lawrence shows off the Second Big Kat of the tournament. It pulled the scales to 49.13 pounds.

The 5th place spot went to Cody Carver and Michael Preece. Carver and Preece teamed up to bring a total weight of 90.95 pounds to the scales and claim their place on the leader board. The big fish in their bag weighed 42.80 pounds,

The Gallipolis location proved to be a very good fishery with some great weights posted. The next King Kat event is scheduled for September 10, 2022, on the Santee Cooper lakes in South Carolina.