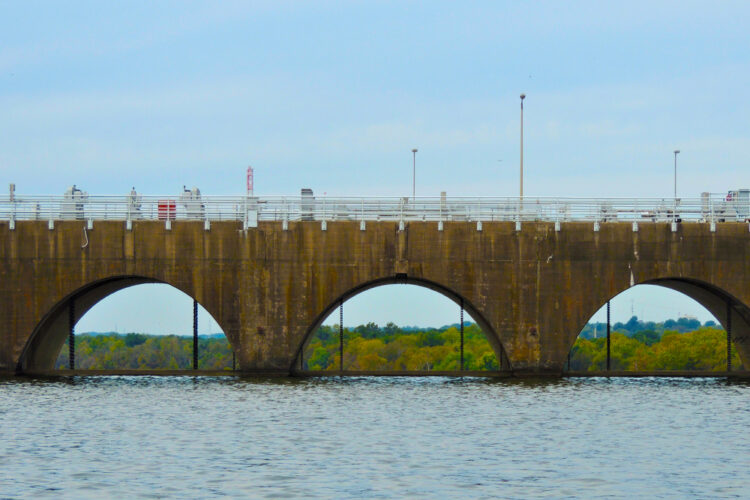 Wilson Lake Dam backs up the smallest lake on the Tennessee River. Water depth varies from nearly 100 feet at the dam to the shallow rapids in trail race at Wheeler Dam some 15 miles away.

The three main catfish species can all be targeted with good success on Wilson Lake in Alabama.

Regardless of your favorite species of catfish, they can all be caught in the waters of Wilson Lake. I have a special affection for the lake because my introduction to trophy catfishing came while fishing with Larry Muse on the popular Alabama impoundment.

It was my good fortune to have the late TJ Stallings (TTI Blakemore Co.) as a friend. I was not into catfishing at the time but I noticed TJ and Larry Muse fishing for big cats on the Mississippi River. I told TJ that I would like to try trophy catfishing sometime. Two weeks later I found myself on Wilson Lake in Colbert County, Alabama on Muse’s SeaArk.

Stallings organized the trip for me with the well-known angler from Mississippi. Muse frequents Wilson because of its trophy blue cat population. He uses various methods to catch them but on inauguration day we would be suspend fishing.

Muse explained that we would set up on a ledge that transitioned from a flat to deeper water. By deep, he meant 60 to 70 feet. He further explained that it was difficult to use the popular dragging method because of flooded timber in the area. We would drop baits straight down from the boat and rely on the scent to attract the fish to an area away from the timber where they could be landed.

Muse explained that the 6/0 on the bottom will often catch the short bites—the fish that don’t take the whole bait in. The bigger fish are more likely to take the whole bait and get hooked on the larger top hook. The next key to catching Wilson blues is location.

“Catfish feed by scent,” noted Muse. “They get on a scent and go to it and eat it. We are fishing on an old river channel ledge that was made before this lake was ever flooded. The movement of water will carry the scent right up that ledge. We should be able to attract fish from here all the way up to the dam. My plan is to send the smell of this fresh bait to one of them!”

Muse’s method worked just like he said it would and led me to make many trips back to Colbert County in search of big blue catfish. That trip launched a new focus in my writing that I continue today.

Flathead catfish are a favorite target of many catfish anglers. They are known for their finicky bite but powerful fight. Roger Breedlove (Patriot Catfishing, INC) is heavily involved with taking disabled veterans fishing on Wilson Lake. When he fishes for flatheads he tries to find structure with good current breaks or lazy water.

“Sometimes I will set up away from the dam where the current starts slacking,” instructed Breedlove. “If I find slack water and featua presence of bait in 12 to 28 feet of water, that is what I like. A tributary channel or

re that’s a little deeper than the surrounding water acts as a travel corridor and can provide great flathead fishing.”

His strategy requires patience. And, unlike some flathead anglers, live bait is not a necessity. Live bait will work but he doesn’t depend on it. He rigs heavy action rods with a normal three-way rig with a sinker drop and a hook drop appropriate to the current and the size of fish he’s targeting.

“When I am anchored for flatheads I don’t use a float on the hook drop,” explained Breedlove. “I bait up with fresh bloody bait, let it set on the bottom, and exercise some patience. If they are finicky I run the bait clicker for a better indication of the bite.”

Patience is needed not only for waiting on the bite, but also for fighting the fish. Experienced anglers can often identify flatheads by the subtlety of the bite. The fish might mess with it for a while before a slowly bending rod tip arcs toward the water. When the rod loads up just pick it up and start reeling, the fish is most likely already hooked.

Once the fish is hooked its behavior is different too. Unlike a blue cat with plenty of headshakes and changing direction, big flatheads will just pull down steady and hard. Their sheer power is a surprise to inexperienced anglers and a pure delight to all that catch them.

On a guided trip with Capt. Brian Barton (Brian Barton Outdoors, LLC) of Muscle Shoals I learned of an old lock system that offered outstanding channel cat fishing. Before the area was flooded a system of locks aided navigation on the Tennessee River near Killen, AL. At one time as many as 9 locks operated on the river. Once Wilson Dam was built and the area flooded and the submerged structure became a channel cat mecca.

“Just like locks today, the old locks were made of concrete,” affirmed Barton. “They were just smaller versions. Because of them, there is some excellent catfish structure at the mouth of Shoal Creek. Talk about a catfish honey hole, you can catch cats all around it.”

The area is full of junk and hangy things, so trolling is not a good option. It is better to get on top of the structure and fish straight down. The best time to fish it, according to Barton is in the Spring when the channels are found in good numbers.

“I will either Spot-Lock or anchor right in the middle of a lock,” said Barton. “I have never caught any big catfish there so light tackle is fine. Personally, I use my original B’n’M SilverCat spinning rods rigged with a small split shot and Daiichi or Tru-Turn hooks.”

If Barton is fishing from his Driftmaster Rod Holders he uses small Daiichi Circle hooks. Inexperienced anglers can let the fish hook themselves and then enjoy the fight. If he is holding his rod and casting he uses 1/0 or 2/0 Tru-Turn hooks. They are basically a standard wire crappie hook. In either case, it is a simple rig with a hook and a small split shot.

“We are targeting 1 ½ – to 3-pound fish,” explained Barton. “You will catch an occasional 8- or 10-pounder but with a good drag you can handle those bigger fish on light tackle.”

“I call this meat fishing,” continued Barton. “I use shad guts or a little piece of skipjack and throw it up on top of the lock which is about 20 feet deep before dropping straight off to 40 feet. Pull it off the ledge and let it fall. That’s fun, but that’s not something you do with anyone. You need some fishing skills because it requires a little more talent to keep from being hung up all the time.”

As an example of what the area can produce, Barton described a day when he and his son were on Lock 5 armed with spinning gear and shad guts. The goal was to catch enough channel cats for an upcoming fish fry.

“We bought a 2-quart container of shad guts. That’s normally enough to fish for two days. We started fishing at 7:00 am and were out of bait by 9:30 and had 89 catfish from one to three pounds.”

“The best bait for the eater-sized catfish on the Tennessee River are fresh shad guts,” concluded Barton. “Small 2- to 3-inch gizzard or threadfin shad are also good, or old fashion chicken livers from the grocery store are hard to beat.”

Editor’s Note: Barton can be contacted through his website, Brian Barton Outdoors, LLC. He specializes in live bait fishing for smallmouth and other species.

Visitors to Wilson Lake will find an area generally referred to as “The Shoals.” By definition, a shoal is the name given to ridges or banks of sand that build up in a river. In this case the Tennessee River that runs through Colbert County, AL. The Shoals area include, Muscle Shoals, Tuscumbia, Sheffield, and Florence. The area has a long history in the music industry. It was, in fact, the birthplace of the famous Muscle Shoals Sound.

A little research indicates that there was a phenomenon there called the Muscle Shoals Sound. Several local studios attracted artist from around the country who came to the area to record their music. At one time the area was home to eight sound studios. The Muscle Shoals Sound was a blend of country, gospel and R & B, according to Alabama Music Hall of Fame curator George Lair in an NPR interview.

Visitors to “The Shoals” have the opportunity to investigate some of that music history by visiting such places as the Alabama Music Hall of Fame, the W.C. Handy Home and Museum, the Muscle Shoals Sound Studio Museum and the famous FAME Recording Studios.

There are many other attractions to visit in the area. Ivy Green, the birthplace of Helen Keller, Indian Mound and Museum, W.C. Handy Birthplace & Museum, and Coon Dog Cemetery, to name a few.

Suitable accommodations are easy to find in Colbert County. I stayed at the Cold Water Inn in Tuscumbia on several occasions. It has everything you need, all set in an antebellum theme that will knock your eyes out. I started each morning with complimentary hot breakfast to fuel my day’s activities.

On a personal note, there are plenty of fine eateries in the Shoals area. One I liked in particular was a place called Champy’s. It is one of those places that is so good you want to tell everyone about it. They are known for their chicken, but everything we had, including the onion rings and, believe it or not, the tamales we had as starters. Just mosey on in when you got a little time. It is very casual and the chicken is prepared fresh while you wait and it is worth the wait!

The other place that came out on top was a little Mexican diner called Casa Mexicana. I confess, on a previous trip we went to Casa Mexicana twice during our short stay in the Shoals. It was that good. There is also one in Sheffield.

Regardless of your culinary and other needs, you will be able to satisfy them in The Shoals, all with a large serving of southern hospitality.