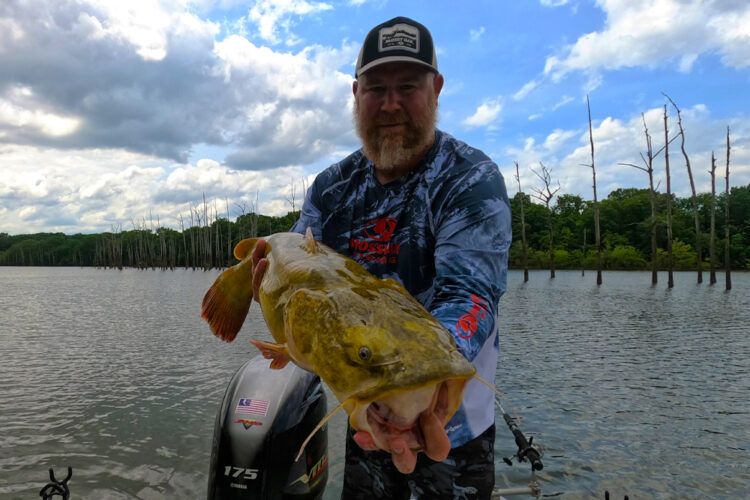 There are many ways to catch a cat, with techniques ranging from active drifting approaches to sitting in one spot with bottom lines out, and a host of rigging options. From a catching standpoint, though, no variable is more critical than what you put on your hook to attract cats and make them bite.

Catfish baits come in many forms, and the best option depends on how you are fishing and the species and size of cats you hope to catch, along with the kinds of baits that are available. With such questions in mind, we’ve highlighted five of the best baits for catfish.

Availability and consistent effectiveness are the calling cards of chicken livers as catfish bait. Available in almost any grocery store and inexpensive, livers put out a scent that channel catfish, bullheads and smaller blue catfish cannot resist.

Because livers have a lot of juice and they break up in the water, they serve double function as chum to call fish close and as bait to attract strikes. Therefore, livers offer an excellent option when you’re not sure exactly where the fish will be and might need to draw them to you.

The most important thing to know about chicken livers is how to keep them on the hook. If you use a small treble hook, wrap the liver above the points and hook it with all three points and lob the cast, your bait will rarely cast off. Once it has soaked, it will toughen and stay on the hook well.

When the bite is strong, you’ll go through livers faster than you might expect. Buy a couple of cups of them. Once livers have been in the sun all day, they degrade substantially and aren’t worth refrigerating for re-use. As a final note, bring hand wipes if you’re fishing with livers. They are sticky and messy.

Night crawlers are right up there with livers in terms of availability. Any bait shop or store that carries fishing bait of any kind probably has crawlers or worms of some kind available. They also might be a shovel scoop away in your back yard!

Night crawlers are highly popular for walleyes and as multi-species fishing bait and catch tons of catfish. They are somewhat overlooked for targeted catfishing in many places, though, and are exceptionally effective, especially for channel catfish and bullheads. Crawlers have plenty of meaty scent, and they pretty much stay on the hook until you catch fish unless pecked away by smaller fish like sunfish or perch.

How to best hook a night crawler could be the subject of long debate. While anglers seeking predator species minimize hooking points to maximize squirming, with catfish, there is virtue in creating more of a “wad” by hooking the worm in a few places. Most cats feed more by scent than sight, and hooking it in more places helps it stay hooked better, reduces lost to bait thieves, and increases the chances that any catfish that bites gets the hook point!

“Stink baits” is broad. It encompasses baits of various consistencies and styles and includes both commercially produced catfish baits and an endless variety of home concoctions, some of which should have danger labels for smell alone!

Some baits are in nugget form, like soft dog food, and go directly on a hook. Others are almost juicy. The most common bait form is a sticky, goopy paste, sold in a tub. To fish these, you need a sponge on your hook or a “catfish worm,” which is usually ether a deeply ribbed plastic worm segment or a tube with holes in it. Either is fitted with a treble hook and gets loaded with bait by mashing it into the tub. (Use a stick!)

Even more so than livers, these kinds of baits break up in the water and form a chum line that leads cats to the bait. They are therefore outstanding in current and best placed toward the head of a hole that’s apt to hold catfish. Because these baits do dissipate, remember to check your bait from time to time and reload as needed!

Various shad and herring species work, and in some waterways, the species that are “running” seasonally impact the bite. Where available, though, skipjack herring are the favored species of many veteran anglers because they are very oily and put out a scent that big catfish find irresistible.

If bait can be caught or purchased still alive, fresh bait tends to work best, because of its consistency and the amount of scent it puts out. Tournament anglers and guides commonly make bait runs and freeze bait, but they take many extra steps to freeze it in a way that maintains fresh qualities, and frozen shad or herring from a bait shop typically won’t hold the same standards.

How to cut and hook cut bait could be the subject of a book. Some anglers simply slice sections from head to tail. Some cut fillets or butterfly cut the bait. Hooking options range from a single big circle hook puncturing a chunk of bait to basically sewing a whole smaller shad or herring onto a hook.

Finally, we cannot ignore live fish because mature flatheads are predators, not scavengers, and generally favor a lively fish (or eel) squirming on a hook over something that is not alive.

The best fish species varies dramatically based on local forage availability and state fishing laws. Bluegill and other sunfish are among the best and most popular in many waters but cannot be used because of gamefish/bait laws in some states. Likewise with perch and yellow bass. In big rivers like the Missouri or Mississippi, a live shad or herring will often outproduce other baitfish species. Where permitted and available, bullheads also make very good flathead baits. Eels work well in tidal rivers.

Live fish are typically hooked a single time, either in the mouth or behind the dorsal fin (with care to not hit the spine) with a large circle hook and used with still presentations, often suspended a couple of feet above the bottom.

We know this only scratches the surface for catfish baits and might not even acknowledged your No. 1 choice. That said, with these five baits, you have quality options for a catching catfish in a huge range of situations!