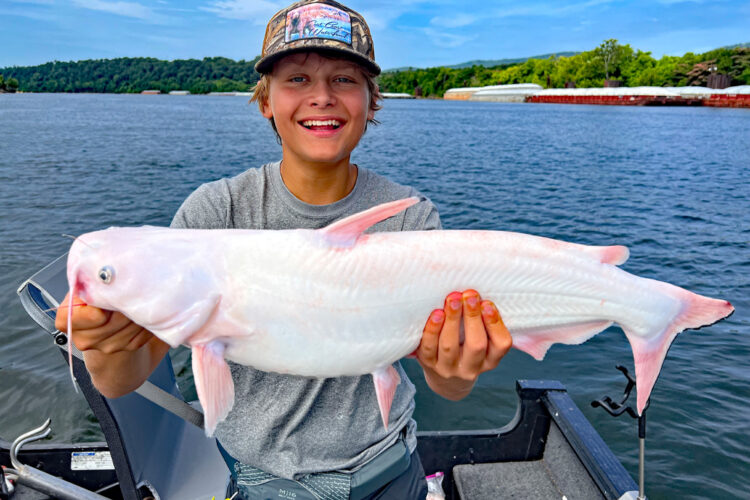 Edwards Tarumianz basically won the “catfishing lottery” when he captured a rare, all-white (leucistic) blue catfish from the Tennessee River near Chattanooga in June. Edwards’ rare catch has been featured on websites across the country, and even around the world, thanks to social media. (Capt. Richard Simms Photo)

CHATTANOOGA, Tenn. – You might call it, “The catfish catch heard around the world.”

On June 28 Edwards Tarumianz caught a rare, leucistic blue catfish from the Tennessee River, near downtown Chattanooga on a fishing trip with me. Leucism is caused by a very rare, recessive gene. It is similar to being an albino, with an almost total lack of color pigmentation, except it does not have the characteristic pink eye of an albino.

We were shocked when we saw it in the clear water before we actually had it in the boat. We were both so excited and nervous we could barely speak until Edwards finally led the fish into the net.

“I know other people who have caught such fish and, of course, shared it on social media. I’ll never fully understand why this one went viral internationally.”  ~ Capt. Richard Simms/ Author and Catfishing Guide

Albino or leucistic catfish are caught periodically around the country, but for fishermen it is somewhat similar to hitting the lottery. Edwards may catfish for the rest of his life and never catch, or even see, another fish like that. I am 67 years old. I have boated literally tens of thousands of catfish over the years and this was the first I’d ever seen in person.

I am sort of a Facebook geek, so, of course, I posted about the rare catch on my business and my personal Facebook page, along with the many other fish Edwards caught that day. Primarily due to the rare nature of the white catfish, the post soon went viral within the fishing community.

A writer for Field & Stream magazine saw the post and placed a story on the popular magazine’s website.

The Field & Stream story called me out for referring to the fish as an albino. I explained to one commenter that, it’s just easier using the term “albino” that folks know, versus trying to explain the scientific nature of various white catfish. Leucistic or piebald are unfamiliar to most people.

– Albino (absence of pigment in the skin and hair, which are white, and the eyes, which are usually pink)

About the same time the Tennessee Wildlife Resources Agency jumped on the bandwagon, sharing news of Edwards’ catch. TWRA has hundreds of thousands of Facebook followers. Their post was shared thousands of times, ultimately attracting the attention of websites around the world.

It was bizarre to read a story announcing a 15-year-old boy caught a white catfish “in the United States.” I’ve seen multiple stories about Edwards’ catch now on international websites, not to mention dozens of websites based in the U.S. I know other people who have caught such fish and, of course, shared it on social media. I’ll never fully understand why this one went viral internationally – other than the fact that Edwards is very photogenic. No doubt the picture of the rare fish and the handsome youngster helped.

It wasn’t included in my original post so on social media numerous people – especially catfishermen – wanted to know what Edwards did with the fish.

Here is the answer:

Edwards and his father, Jeff, are hardcore anglers and have fished many places. They too are amazed at how news of the catch and the photo have spread around the world.

“It’s incredible how it’s blown up,” said Jeff. “We’ve had friends from all over saying they saw it.”

Even if he had chosen to keep the fish, taxidermists are unable to mount actual catfish because their skin is too fragile. Jeff, however, said he intends to have a replica mount of the rare white cat created.

Hopefully he will also save and print the dozens, or hundreds, of stories published around the world about the catch. There is no doubt Edwards has received his so-called “15 minutes of fame,” plus some.

Edwards was one of the politest young men I’ve ever had in the boat. He is also one of the most accomplished 15-year-old anglers I’ve ever been around. It was a very special morning, capped off by a catfish unlike any I’ve ever seen before – and may never see again!