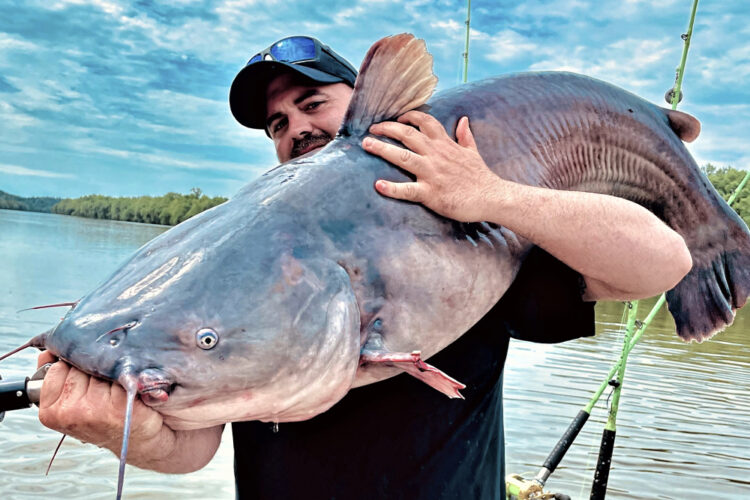 A man and his dog set out in West Virginia to do a little fishing. The result was a new state record for blue catfish with a little help from a friend.

Fishing alone is not a normal activity for Lancaster, OH angler Steven Price. In fact, his first time taking a solo trip resulted in a state record blue cat. Price was fishing on the Kanawha River, a tributary to the Ohio River.

It was the middle of the week and Price had about a half-day to go fishing before work. The urge to fish was compounded by the fishing conditions that existed. His normal fishing partner was already at work but he was still tempted to go.

“I started the day fishing solo with my lab Daisy,” recalled Price. “The river was on a slight rise with overcast skies and the water temps were in the low 70s. There was a storm coming.”

Most catfish anglers would agree, that those conditions look right for a good bite. And a good bite it was. Price decided to take the opportunity to go enjoy the day with Daisy. They launched the boat and made their way upriver and set up on the first spot.

“I caught 2 small flatheads at the first stop,” reported Price. “I pulled the anchor and moved on to another spot. I hooked, fought, and lost what I believe was a really big flathead. I didn’t think there would be any way to top that one.”

Then, about 20 minutes later Price landed a 56-pound blue cat. That is a huge fish for his area and was his personal best (PB) blue! He was in some disbelief after catching the new PB and thought to himself that it would be the biggest of the year.

“It got even crazier right after that,” reported Price. “Another rod bent down and I found myself fighting an even bigger fish. I didn’t have my net handle and net back together from landing the 56-pounder, so I was fighting the fish with one hand and putting the net together with the other. I also had to juggle eight lines and get them in. The fish had crossed 4 of them.”

“When I finally got the blue landed my scale was showing more than 70 pounds in the net,” stated Price. “I weighed it twice and couldn’t believe it was even real.”

He left the fish in the net alongside the boat while drifting downriver. He began calling friends for help telling them that he thought he had broken the state record. He was able to contact Todd Anderson who agreed to meet him. He also reached WVDNR Hatchery Manager Ryan Bosserman who would certify the record.

“When Steve called I was at my house 20 miles away,” explained Anderson. “I loaded the boat and launched in Point Pleasant and ran about 15 miles up the Kanawha River to where I met him drifting down the river with the fish in his landing net.”

The two friends transferred the big blue into Anderson’s SeaArk ProCat with an 80-gallon livewell.

“We headed back downriver to the Leon Boat Ramp,” continued Anderson. “The WVDNR was waiting at the ramp. Steve’s biggest concern was the health of the fish but it was in very good condition. Steve was definitely overwhelmed by the amazing morning he had.”

Price estimated that he had drifted with the fish in the net for about 45 minutes. With Bosserman waiting at the ramp no more than about an hour passed before the fish was caught, certified, and released. The big fish swam off strongly.

“I think that the blue catfish fishing is going to keep getting better,” stated Bosserman after certifying the second state record in a couple of months. “With the regulations that we have to help protect the fish, I have a feeling that I will be getting more phone calls about possible state record at any time!”

“Thank you Ryan Bosserman for getting there so quickly,” concluded Price. “The fish was really healthy and swam off strong! Thank you to Todd and everyone involved. I’ll never forget that day. I work hard to catch these big fish. It’s a challenging body of water to fish but I’ll continue doing what I’m doing and looking for another.”