Why We Catfish: A Guest Editorial by Chris “Fud” Wallace 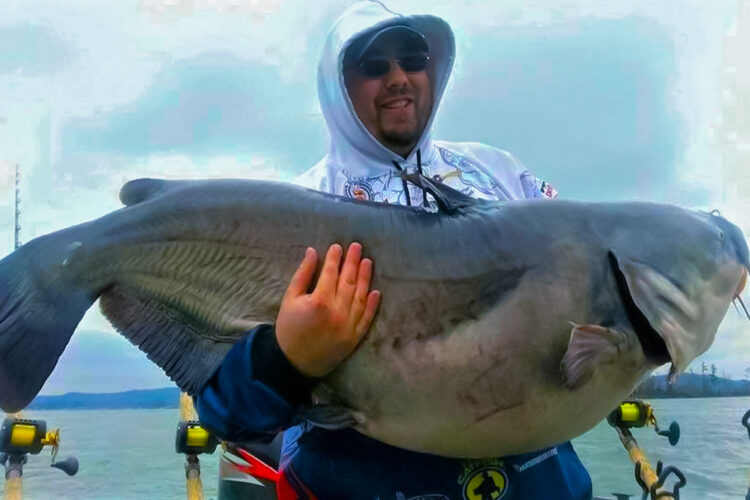 Wallace is shown here with a 69-pound blue from Guntersville Lake in Alabama.

Anglers who experience catfishing at an early age are usually the same ones who promote conservation of the resource for the future and also find peace on the water.

My mother and father separated when I was 3 years old. I lived with my mother and we moved a lot. I rarely got to see my dad as we normally lived in a different state each year. So when I did get to visit, fishing was one of the things we did together.

I am 44 years old now and I have been catfishing since I was a young child. I was the kid in the creek catching crawdads and frogs for no reason, LOL. My local water is the White River (not boatable), Prairie Creek Reservoir, and the Mississinewa River. I have been tournament catfishing since about 2010.

When I was around 8 or 9 years old, visits with my dad would result in watering the lawn real good late in the day. As it got dark that’s when the fun started as the nightcrawlers began to come to the surface.

We each had a flashlight and a butter tub. You had to be quick because when you hit that worm with the light it would suck back into the earth. We had to grab them real quick. I remember how everything was in good competition with dad. We even competed to see who caught the most worms.

After catching our bait it was off to the Mississinewa River to fish. We mostly caught yellow bellies (bullheads) and channel cats. It was an activity I enjoyed for many hours over many years. We used Zebco 33 reels with a 10- to 12-pound test line, rigged with J hooks.

I remember catching 4- to 5-pound yellow bellies and up to 10-pound channel catfish. Sometimes we would hook into a big fish that would break us off. I think this was before the days of braid and circle hooks but I’m not really sure, to be honest.

There was a long period of time when I didn’t fish. It was from about the age of 20 to 30 years old. I am not sure what triggered me to start fishing again but I’m glad I did.

Watching the sport grow exponentially in front of my eyes has been something that truly amazes me. It’s very important that with this growth in the sport we watch very carefully what we do to shape it for the future. Image is very important. We are professional anglers so we need to act and dress as such.

It is very important to me that we are teaching the next generation about the conservation of these trophy sport fish. That’s what they are no matter how your state classifies them and we should promote their conservation for the future.

I have had several boats during my life. I started out with boats that I could turn into catfish boats. Now I have a SeaArk ProCat 200 and a SeaArk Dynasty. These were the boats of my dreams and they felt so out of reach 7 to 8 years ago but I made it happen. I do understand that a boat is just a tool it doesn’t win tournaments for you. It’s the angler inside that masters the tools he has. It’s that drive that brings success.

All three of my boys have joined me on my SeaArks on numerous occasions. They have even fished tournaments with me. It’s not their favorite thing to do but they enjoy the time together and will hopefully grow in their desire to tournament fish later on.

Through my years of tournament catfishing, I have met some truly amazing friends. My hope and goals are to be the very best angler I can be while also being an ambassador for catfishing as a sport.

Like many others, I can’t explain why but I am at my most peaceful and best mental place on the water. It is like I’m where I’m supposed to be when I am out in the boat on the water doing what I love. My hope is that everyone can have that feeling in their life, no matter what it is!