2022 CatMasters Helena – How They Fished

The 2022 CatMasters at Helena event attracted 74 catfish teams made up of 170 anglers, to Helena, Arkansas, and the Mississippi River for two days of competitive fishing in ACA Division 1. Anglers look forward to the event because of its reputation for big cats. The area holds plenty of big blue catfish and this year’s event posted some very nice weights.

The two-day tournament is part of the ACA Tournament Alliance so competing ACA members are also vying for thousands of dollars in cash and prizes in the points race. Additionally, ACA members receive a chance to win a SeaArk boat package in a drawing at the end of the year.

Each team can be up to three anglers with a three fish per day weigh-in limit. A tough bite on day one improved for the final day on Saturday.

Day one ended with Team Dodd (Jeff Dodd, Randy Dodd, Jonathan Dodd) holding down the first place spot with a three-fish weight of 175.67 pounds. Their bag included Big Fish of day one at 81.71 pounds, Following in second place was Rob Benningfield and Jason Reynolds with 148.08 pounds and a big fish of 63.02 pounds. Third place on day one was held by Hunter Jones, Chris Stout, and Dustin Shepard with a weight of 130.67 including a 76.44 pounder. 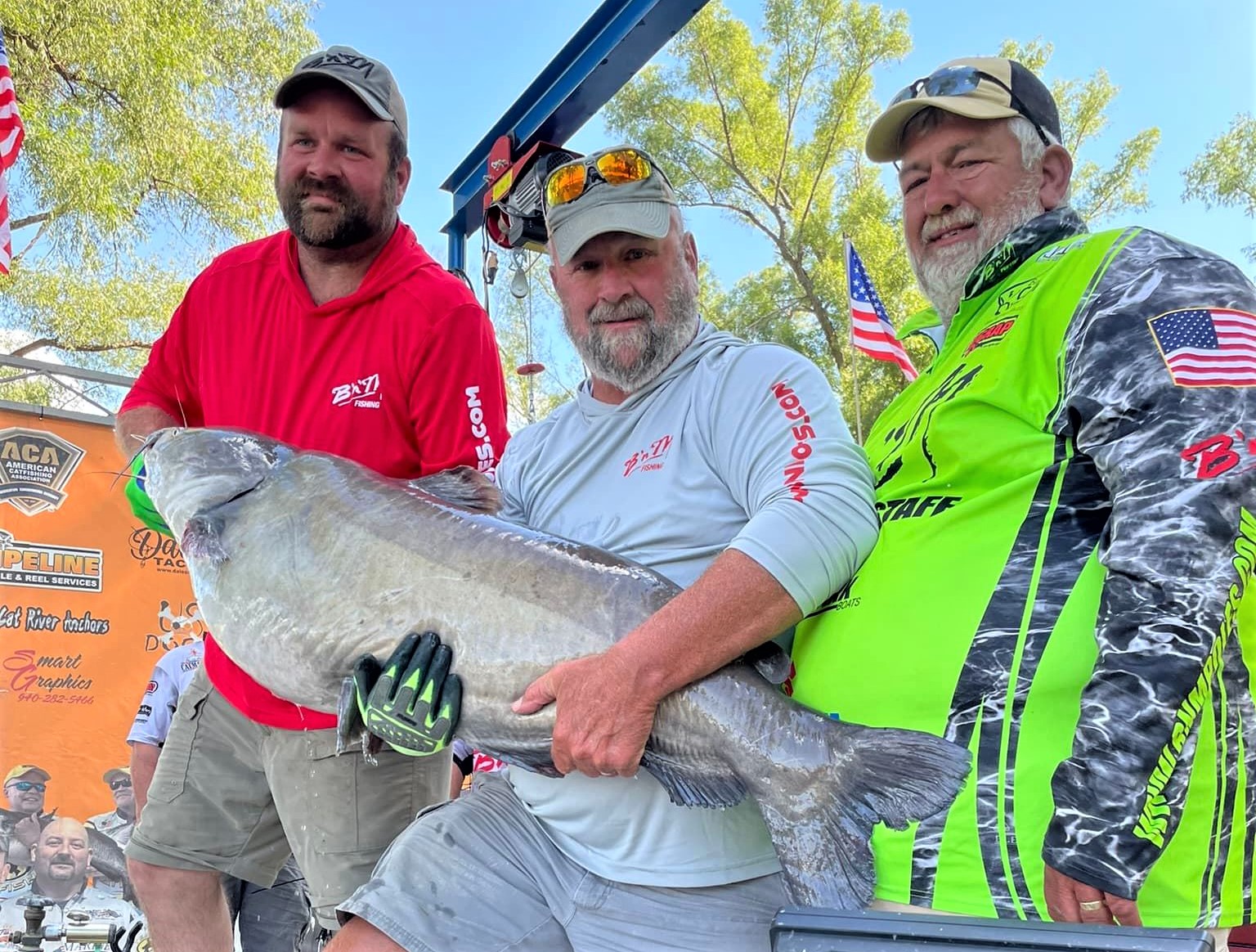 After holding down first place on day one, Jeff Dodd, Randy Dodd, and Jonathan Dodd added 185.73 pounds for a two-day total of 361.40 pounds to take the win at The CatMasters at Helena. Their day two bag included the Overall Big Fish at 81.71 pounds.

Jonathan caught 3 fish that outweighed his previous personal bests. Along with the 82 pounder he had a 63 and a 74. Those two outstanding days were just too much for anyone in the field to catch up with.

“The river was in excellent shape,” reported Jeff. “We fished BIG skipjack, of course, targeting water in the 40ish foot range. All of our fish were caught on B’n’M Bumping Rods.”

“Of course the SeaArk Dynasty was awesome,” concluded Jeff. “We had the big live well full both days. A BIG thanks to all my sponsors, SeaArk Boats, B’n’M Poles, Big River Cats, WavePro, Dales Tackle, and River Rat Reel Repair. And congrats to all on top of the leader board. It was a pretty good day for the Dodds! 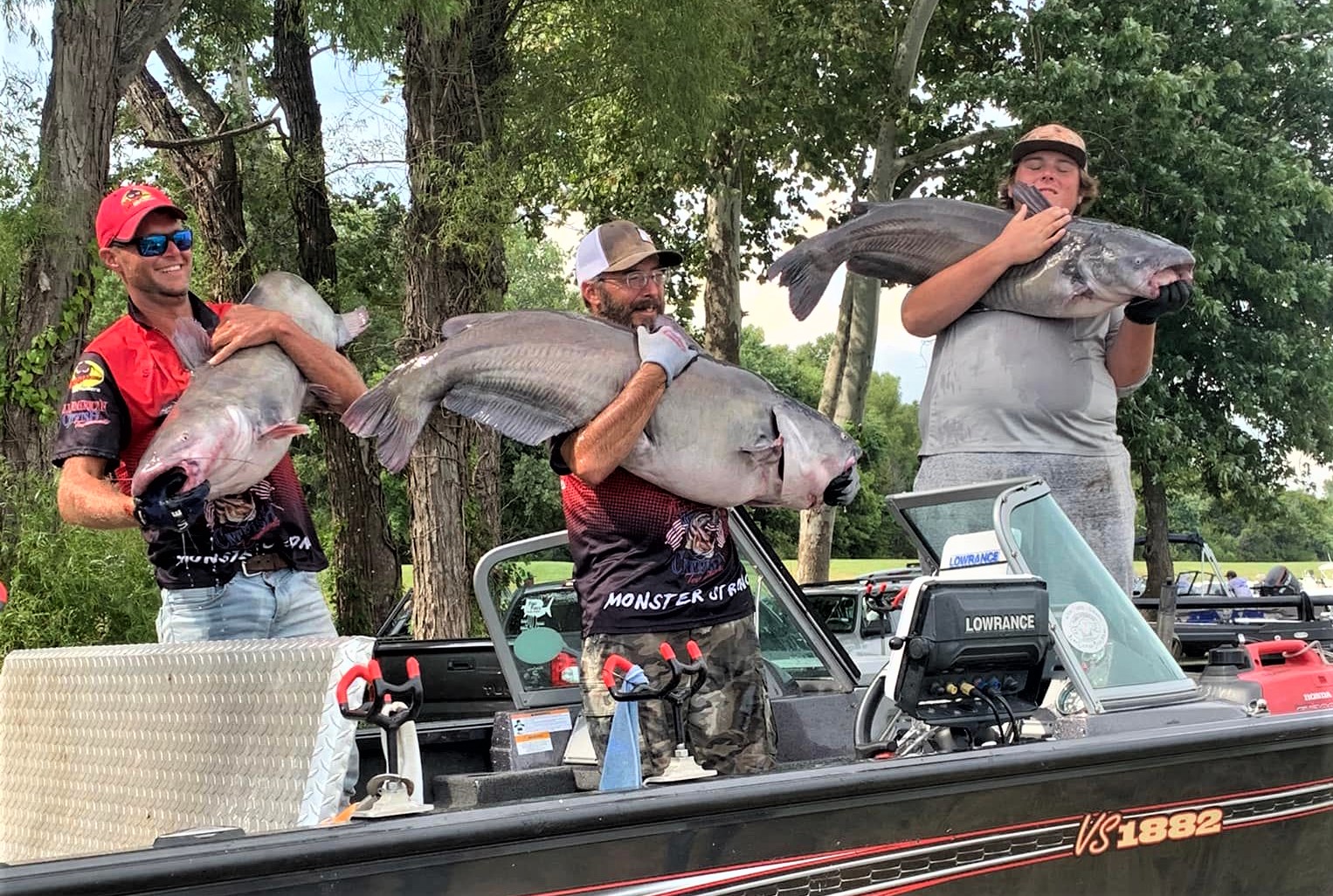 The runner-up spot went to Team All American Catfish (John Berglund, Eddie Henney, and Ryan Berglund). The Kansas team put together a strategy that produced 99.31 pounds on day one and added 154.63 pounds on day two. They moved up from 8th place on day one to claim the overall second place money with a total weight of  253.94 pounds and give the Top Finishing Youth Award to Ryan Berglund.

“We got to Helena Monday morning and instantly hit the water and started scanning,” reported John. “We found a few fish but just wasn’t what we were looking for. So that night while back in the room we started looking at the river conditions/levels and with a fairly stable river that was projected to start dropping right before the tournament we decided we needed to go downstream as far as we were comfortable with.”

The team expected those downstream waters would see the effects of the falling river last and hopefully not change the fish patterns. They ended up finding fish in pretty heavy cover, making bumping a challenge.

“Needless to say we went through some tackle,” continued John. “But we thought it would be worth it. Our bait of choice was skipjack as always for the Mississippi River. The weather was really pretty decent all week except for Tuesday afternoon. We got caught in a pretty good thunderstorm and had to pull up on the shore and wait it out. Overall it was a great week of fishing and we put fish in the boat every day we were there.” 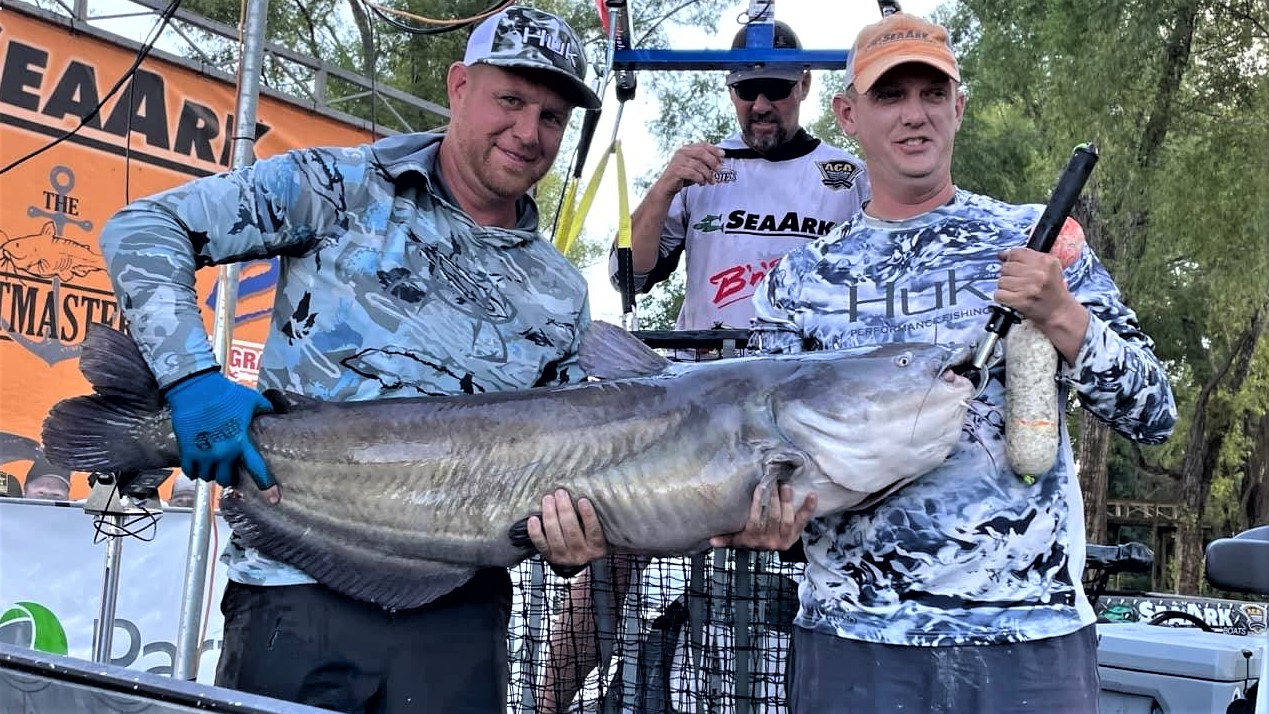 Bringing in the 3rd place bag was the team of Rob Benningfield and Jason Reynolds. Their day one weight of 148.08 pounds was good enough to hold down the 2nd place spot. They added 108.72 pounds on day two and finished in third place.

Benningfield and Reynolds launched in Rosedale and fished south of Helena. They found fish in water that ranged from 30 to 60 feet deep.

“We bumped with skipjack,” reported Benningfield. “Overall the bite was fairly tough for us. We boated 4 fish on Friday and 6 on Saturday. We had to move around a lot and catch a fish here and a fish there.”

“We want to thank Bama Skips for great fresh bait,” concluded Benningfield. “Thanks also to the city of Helena and The CatMasters for a great event.”

Other Winners
The remaining top ten teams and weights are listed below along with the other awards that were presented. 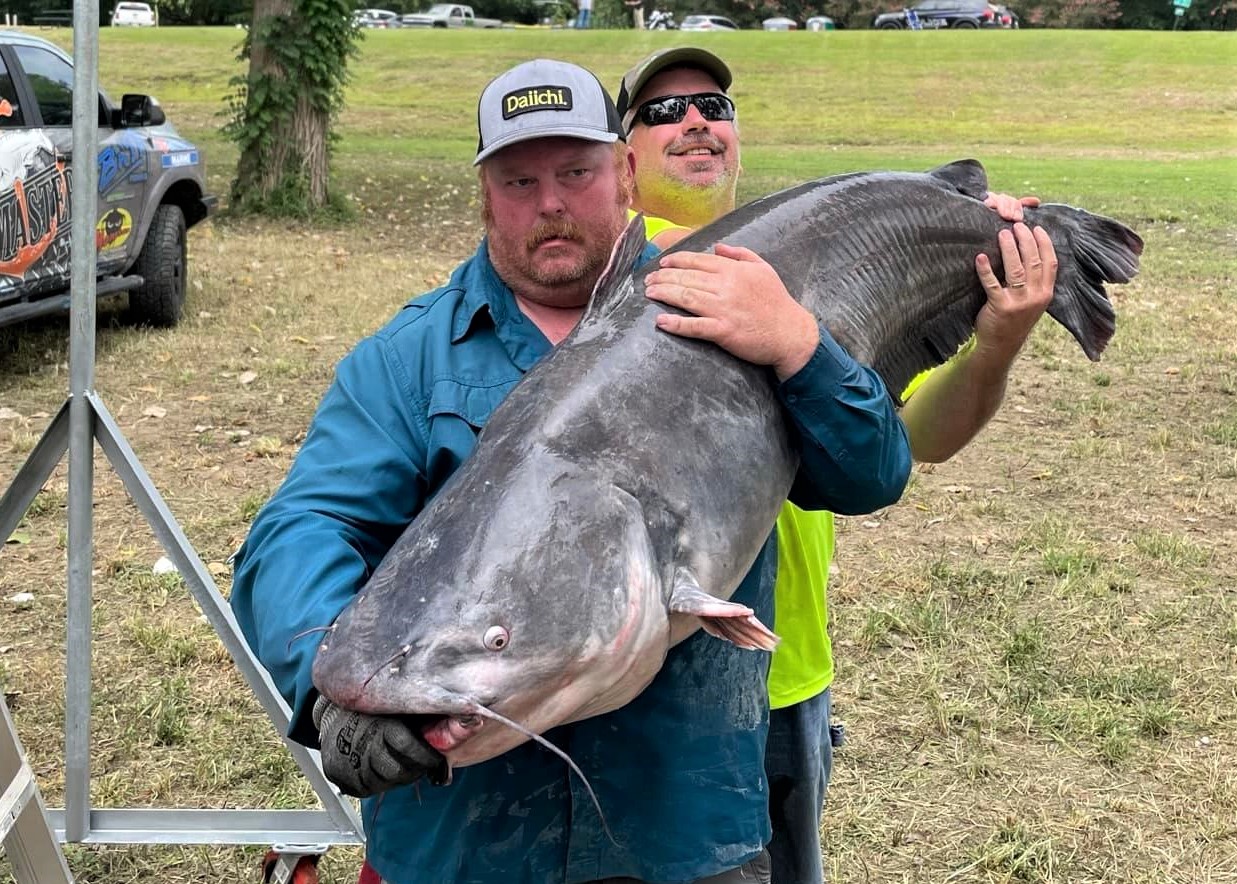 Jason Bell and Brian Bloesch brought a 77.73-pound blue to the scales to earn the Big Fish Day Two Award. They were fishing under the name of Team TimberKat. 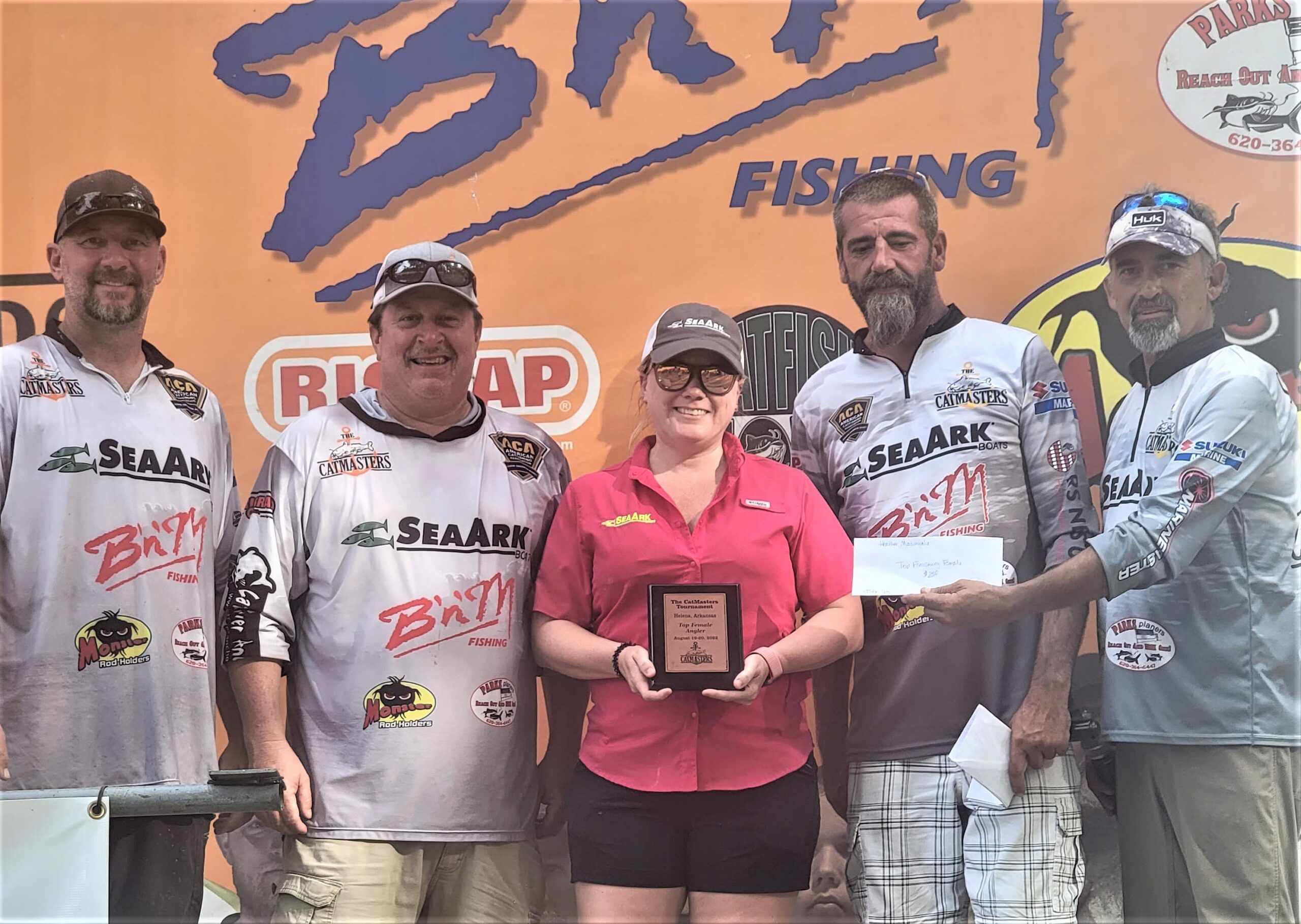 The Top Finishing Female Award went to Heather Masingale. She was fishing with Jason and Daryl Masingale. The team finished the two-day tournament with 177.46 pounds. 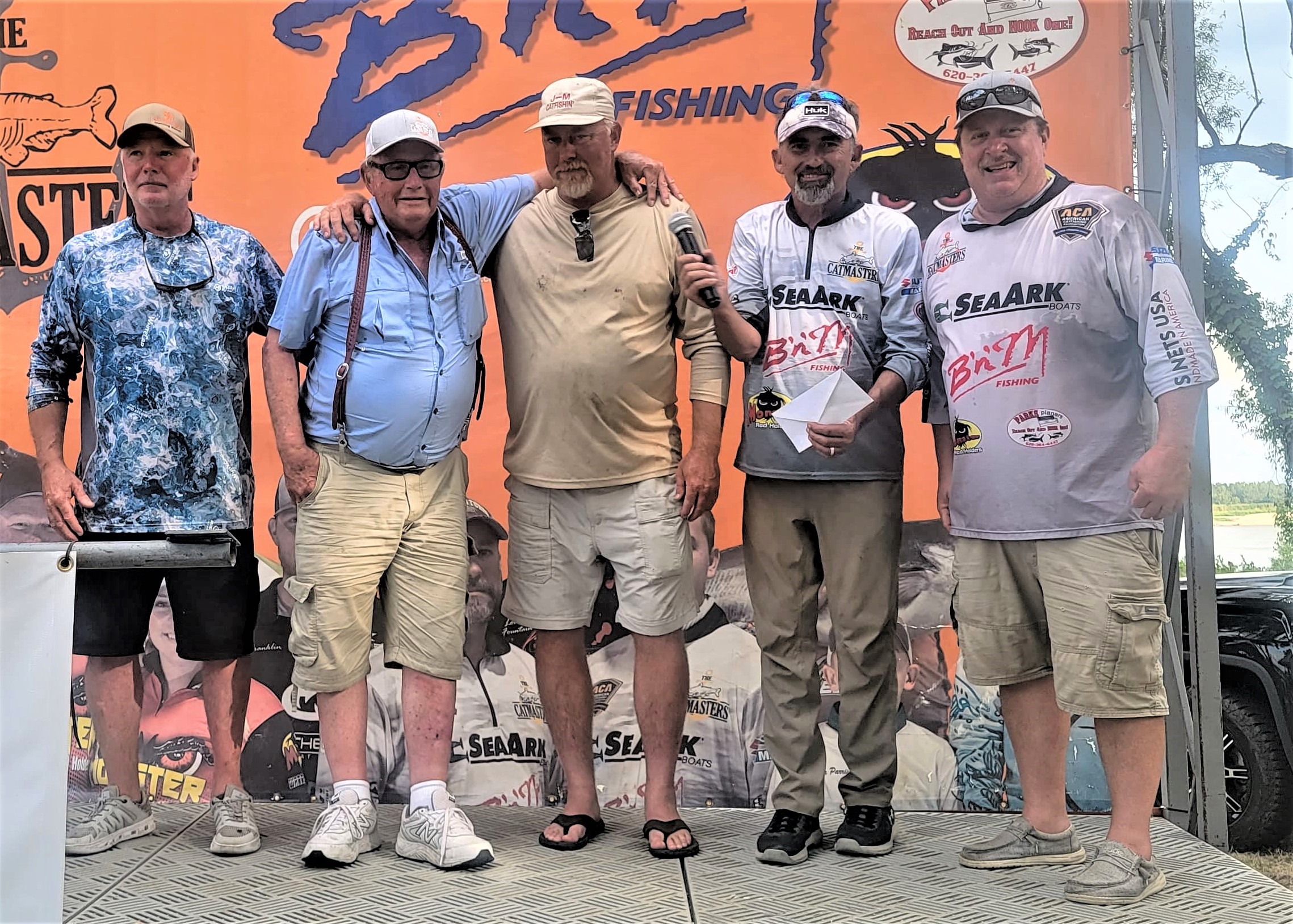 John Mangum (with suspenders in the photo) was awarded the Top Finishing Vet Award. He was fishing with his son Johnny Mangum and Justice Mickley. They fished under the team name of J-M Catfishin.

Final Thoughts
The Helena event produced a total weight of 7708.75 pounds of catfish coming to the scales. Of that weight, 4114 pounds came on day 1. In the final analysis, Team Dodd’s day one lead was too much to overcome. They had a better day two and finished more than 100 pounds in front of the field.

Tournament director, Bryan St. Alma offered praise for the volunteer staff, the sponsors, and the anglers saying, “We could not do it without the support of a lot of people. I want to thank them all. I would also like to invite people to visit our website to see exactly who supports us. You can also check out future event dates, information on the points race, and other relevant information.”

Stay tuned for some exciting announcements for the coming year by following The CatMasters on Facebook and checking them out on their website. Their next event will be in Caruthersville on July 29-30, 2022. Registration is open.