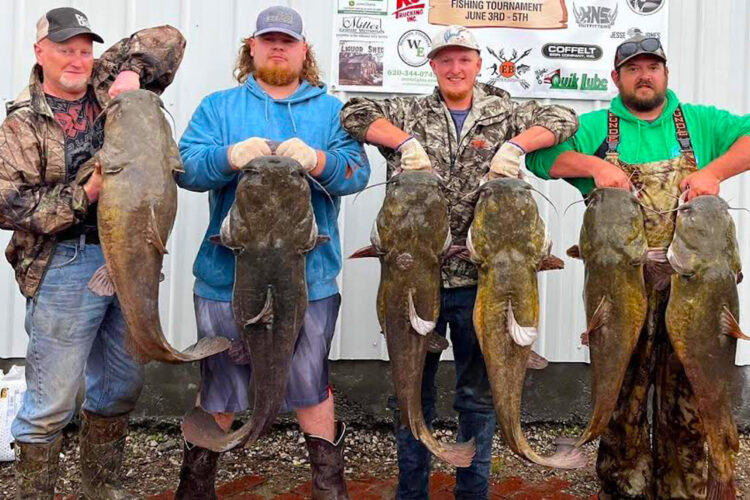 Kansas’ murky rivers and reservoirs have the habitat and food that world-class catfish like.

The region producing some of the best flathead fishing in the nation doesn’t get a lot of fanfare.

You won’t find fishing resorts or waterfront restaurants in southeast Kansas. Nor will you find many flathead guides, marinas, or bait and tackle shops.

In fact, it’s tough to even find access to some of the rivers because of Kansas law that gives landowners ownership of up to half of the stream bed.

But make no mistake, the muddy rivers and reservoirs of southeast Kansas are big-cat country.

Want some proof? Check this out:

“We can’t really sample the flatheads in these rivers because of the lack of access,” said Ben Neely of the Kansas Department of Wildlife and Parks. “But we do know that there are still a lot of big fish in there.”

“Flatheads are native to Kansas, and they do well in this region. They have the habitat they like—the brush and snags where they can hide out during the day and the shallow areas and riffles where they can feed at night.”

“And they have a lot of food—shad, sunfish, crayfish, you name it,” continued Neely.

Occasionally, the flatheads even take a whopper-sized meal. An examination of the world-record flathead’s stomach revealed that it had just ingested a 28-inch bigmouth buffalo.

The Neosho River is the lifeblood of Kansas flathead fishing. It starts in Morris County in east-central Kansas and flows southeast for 463 miles into northeast Oklahoma.

Some of its tributaries such as the Cottonwood River, and the reservoirs it feeds such as Council Grove and John Redmond, also hold some bruiser flatheads.

The best public-fishing opportunities can be found below the dams at Council Grove and John Redmond and in city parks in towns such as Chetopa, Burlington, Iola, Chanute, and Oswego.

Talk to Cade Johnson, who was brought up catfishing. Four generations of his family have been chasing big flatheads on the Neosho and Cottonwood Rivers and Council Grove Reservoir.

Johnson and his dad have landed an 83-pound flathead on a trotline in Munkers Creek above Council Grove Reservoir and a 65-pound fish on rod and reel below a dam.

That rod and reel fish was caught on a jig and a 6-foot spinning rod and a reel spooled with 12-pound test line. Sound like a fish story? Johnson has a video to prove it.

“The best time to catch them on rod and reel is the month of June, but we’ll also catch them in April and May,” said Johnson, who is 31. “Our favorite time for running trotlines is late September and October when they are feeding to put on some weight for winter.”

Johnson finds his best fishing in bends in the river where brush has piled up.

“Anywhere you find brush in 5 to 6 feet of water, there will be flatheads under it,” he said.

Johnson often baits his trotline and bank poles with green sunfish. But bullheads, creek chubs, and other small panfish also will lure flatheads.

Nick Bess of Hartford, Kansas, an avid catfish chaser and one of the organizers of the Yeager-Jenkins tournament, also follows family tradition when he fishes for big flatheads.

He has fished with his grandpa, his dad, and his uncles for as long as he can remember. He has photos of local fishing legends with flatheads as big as a child. And he remembers days when he experienced the thrill of fighting one of those river monsters.

Bess caught an 85-pound flathead on a trotline, and a 63-pound fish on rod and reel.

“Usually, our best fishing comes when there is some current,” said Bess, who is 33. “Especially when the water is up, if you can find a creek running into the river, it’s great.”

“If there’s some brush near those creek mouths, it’s even better,” added Bess. “There always seem to be big flatheads around beaver dams.”

Like Johnson, Bess releases the big fish he catches. And he credits that growing catch and release ethic among many other avid catfish anglers as playing a part in the river’s success story.

But just as important, Kansas’ trespassing laws play a role in the river’s success. Because the Neosho River flows through so much privately owned land, it’s impossible for fishermen to float the river for any distance. That, in effect, results in refuge areas for big fish.

“The lack of access definitely plays a part,” Neely said. “There are stretches of river that just don’t get hit too hard, and that’s an advantage for the catfish.”