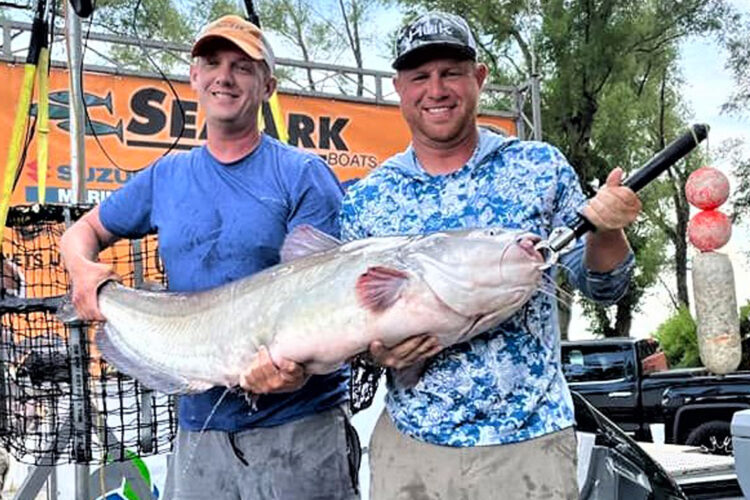 The CatMasters new drive through weigh-in procedures are intended to shorten weigh-in time and result in better fish care.

One of the most prominent concerns of catfish tournament directors relates to fish care. Over the years many innovative ideas have been considered to improve the weigh-in line experience and improve the health of the catfish that will be released following weigh-in.

The CatMasters were the first to introduce a livewell rule back in January of 2019. They have added livewell size conditions (one 50-gallon tank or two 40-gallon tanks as a minimum) and they have to be capable of recirculating the water. They have also adopted 3-fish limits and began encouraging pure oxygen systems.

The CatMaster’s latest innovation was introduced at their August event in Helena, Arkansas. The co-tournament directors (Bryan St. Ama, Jeremy (Skinny) Busby, Ty Lee Nall, and James Milton) are always bouncing ideas around to improve the way they take care of the fish.

“Summer tournaments are always tough with respect to fish care,” informed St. Ama. “We tried some stuff at Caruthersville and this drive through system is basically a result of those practices. Ty Nall our weighmaster and fellow CatMasters director had the original idea and we’ve been playing with the design since returning from Caruthersville.”

“This is not just my idea,” noted Nall. “It was really a collective effort by all of us. James (Milton) and I are the grunts that lifted 9,000 pounds of catfish at Tawakoni and got worn out. That’s hard on the back. So James and I have talked about simplifying the process for a long time.”

After the Caruthersville event in 2022, they started talking with St. Ama about a better system. The result is the introduction of a new system that is intended to improve tournament efficiency by speeding up the weigh-in while contributing to better fish care by getting them back to the water quicker.

“We are always thinking about conservation,” continued Nall. “It is important to keep time in mind during the tournament to get all the fish through weigh-in and back to the water as quickly as possible. The less we have to touch the fish seems to be the more logical thing. Plus it is just a pain for us and the anglers to pass the buckets back and forth from stage to boat. We are having to lift them over rod holders, Bimini tops, and all the other stuff that’s in the way.”

Nall mentioned the huge livewells in SeaArk Boats and the thought that it just seemed simpler to grab the fish, put them in a basket to weigh, and then put them right back in the livewell.

“I’m partial to SeaArk,” admitted Nall. “They are a fantastic company that also has conservation on their mind. But this innovation will work with all boats to improve the tournament experience.”

The process began with St. Ama sketching and drawing prototypes to eliminate as many bugs as possible on paper before turning to the construction part of the project. Major considerations included a custom sling, final height, and portability.

The completed drive through system includes a frame, motorized lift, scales, and a sling. Anglers tow their boats through the frame in front of the stage and transfer their catch to a sling that is connected to the scales.

“We felt like there was too much fish handling at the weigh-in,” stated St. Ama. “And too much time was being spent in line. A traditional fish weigh-in procedure literally puts fish in three different totes before being released. The sling system moves them once to the sling and then back to the livewell for release. This system will be better for the fish and hopefully save precious time in larger events.”

“We realize there will be a learning curve for us and the anglers too,” acknowledged St. Ama. “The system features a motorized lift and a Tournament Pro Saltwater scale system with digital displays.”

“A major key to success will be for our anglers to cooperate and be ready at the scales,” concluded St. Ama. “They will need to remove all the clutter in their boat and be ready to weigh when they reach the stage.”

Final Thoughts:
St. Ama revealed that a new stage will soon bless the CatMaster weigh-ins to provide a more professional show. It is housed in a 9-foot-tall by 34-foot-long trailer.  Additionally, the team has secured a new traveling Star Link Wi-Fi dish to eliminate the streaming complications of the past.

The CatMasters emphasis on fish care is recognized throughout the catfish community as they develop catfish tournaments for the future and CatfishNOW applauds them for their continuous efforts in support of catfish conservation in particular and promotion of the sport in general.