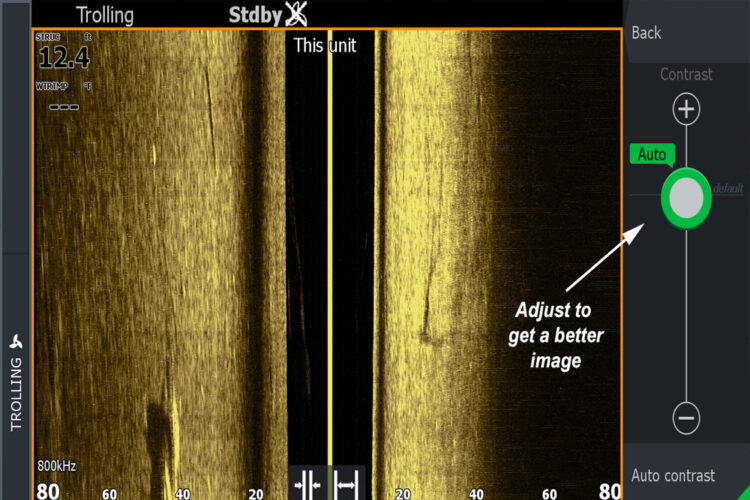 The contrast setting can be increased or decreased to get the best image. (Brad Wiegmann Photo)

Optimizing Your Contrast and Sensitivity Settings

You could be missing fish. Not because you have the wrong colored or sized lure on. No, it’s probably because you have not optimized your contrast and sensitivity settings when out catfishing.

A contrast setting is available when adjusting imaging on side-scanning and down-scanning sonar. It is set to manufactured settings when you get a sonar unit, however, this is just recommended setting and can be adjusted to get the best image possible. Adjusting the contrast setting will not change the frequency setting, however, imaging resolution will change accordingly with 1.2 MHz having the highest resolution followed by 800 kHz and 455 kHz.

Increasing the contrast setting will brighten the ratio between the light and dark areas of the screen. In the manufactures auto setting this could mean you have it set too bright or dark to see cover or structure easily. Keep in mind, that the contrast setting has nothing to do with the backlighting of a sonar unit and how easy it is to actually see the screen.

Traditional 2D sonar uses sensitivity to show detail below the boat. Similar to side-scanning or down-scanning the recommended factory setting can be tweaked to see fish, structure, or cover better. Increase the sensitivity to just before you start getting clutter in the imaging.

Other options like noise rejection or surface clarity can be adjusted to optimize your screen imaging. Noise rejection settings can filter interference from engine vibration, air bubbles, and bilge pumps. Surface clarity settings reduce temperature inversion or wave action near the surface.