Mississippi River Monsters 2022 — How They Fished 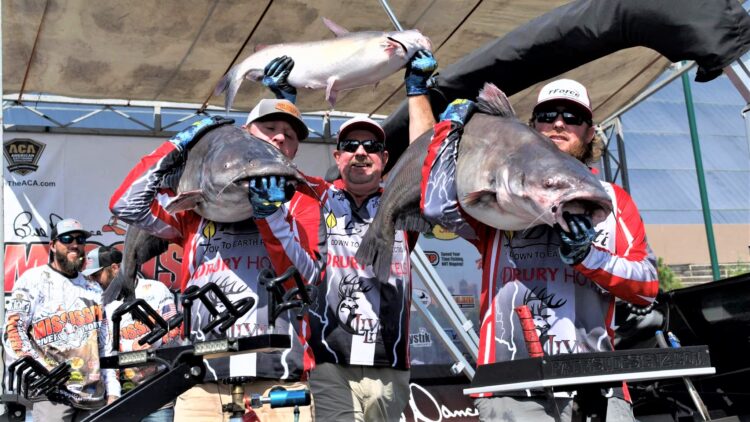 The 2022 Mississippi River Monsters tournament out of Memphis, TN ended with lots of Big Muddy trophy catfish coming to the scales. Spectators at the September 17, 2022 event witnessed 4,774.20 pounds come to the stage at Bass Pro Shops at the Pyramid. The top 12 teams presented bags weighing more than 100 pounds in 3 fish.

One hundred eleven boats, manned by 280 anglers, tackled the Mississippi River on a beautiful Saturday morning in Memphis. Temperatures rose into the 90s by weigh-in time as anglers competed against the best of the best in tournament catfishing.

As part of the ACA Tournament Alliance, each ACA Member Angler had their names entered to win a SeaArk Boat at the end of the year.

Anglers fishing the Division 1 American Catfishing Association tournament found a good early bite on the Mississippi River. Boats began coming to the scales early with their limit of 3 weigh-in fish.

Four early teams had weights exceeding 100 pounds. They including Team Dewitt (Les Thompson, Les Thompson, Jr., and Trenton Thompson) who took the early lead with 129.65 pounds. A 78.55-pound blue was posted by team Puddle Jumper (Thomas Dollens and Kelly Marietta) as they took the early lead in the Big Fish competition as the first boat to come to the scales.

When all the weights were in at MRM, a first-time competing team from Missouri joined past winners by posting a 3-fish limit weighing nearly 130 pounds. 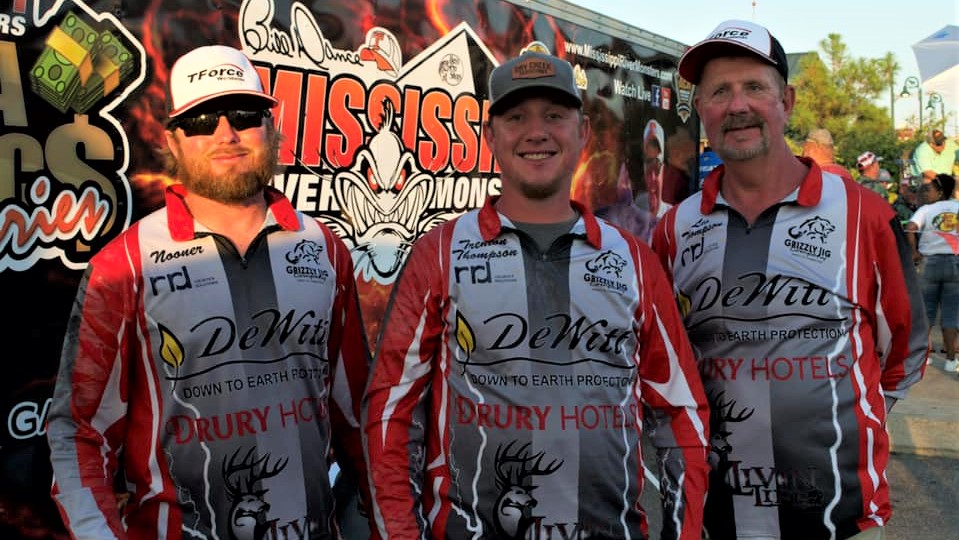 The top spot went to Team Dewitt. The well-known tournament team is made up of Les Thompson, Les Thompson, Jr. (Nooner Hall), and Trenton Thompson. It was their first time fishing at the event. Their early weight of 129.65 held up for the rest of the day as they claimed the first-place honors. The big fish in their bag weighed 62 pounds and their under weighed in at 14 pounds.

Team Dewitt traveled to Memphis with a tournament strategy in mind that they had developed a couple of weeks earlier.

“We’ve had a game plan for 2 weeks,” noted Nooner. “We felt confident that we could catch some nice fish if we stuck to the game plan. We went pre-fishing Tuesday for a few hours but we never went to our number 1 place. We looked for secondary areas within a reasonable distance from number 1, but it was not needed.”

“We relaxed the rest of the week and washed the boat,” joked Nooner.

The river level played a big hand in their game plan. They knew the fish were there and they did not want to pressure them so they quit fishing the area 10 days before the tournament.

“We bumped in water that ranged from 35 to 60 feet deep,” reported Nooner. “We were using fresh skipjack for bait in currents that ranged from 2 ½ to 3 mph. We had our first fish in the boat in the first 5 minutes and we caught fish until we decided to leave.”

Fish care was the team’s primary concern. Since they had a solid weight early they decided to forget trying to upgrade and head for the scales with the weight that they had. It was obviously a good decision.

“Thanks to George Young Jr. and the MRM Crew for a great ran tournament,” praised Nooner. “This was the first one we’ve got to fish and we look forward to the rest of them!” 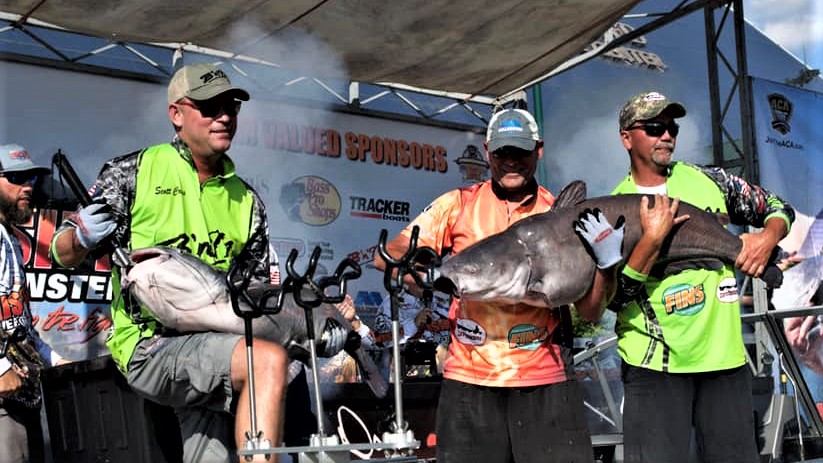 The runner-up spot went to Scott Cress, Carl Crone, and Jason Jones. They put together a strategy that brought a 3-fish weight of 127.10 pounds to the scales to claim the second spot and they also won the Driftmaster Rod Holder Bonus. They were just a couple of pounds shy of the top spot.

Some pre-tournament fishing helped the duo build a strategy for tournament Saturday. They covered a lot of water to find their fishable water.

“The weather was stable in the low 90’s all week,” reported Cress following the tournament. “The water level was low which really changes the river and makes it challenging to rely on what’s worked in the past.”

“We pre-fished two days and ruled out a ton of water,” continued Cress. “We did find two banks holding good fish. They were far apart but we ended up fishing both banks on tournament day.”

Bumping is a favorite technique on the Big Muddy and that is exactly what Cress, Crone, and Jones did. They found some good current and water depths to fish.

“We were bumping in current that was running at about 2 mph,” explained Cress. “The water depth ranged from 40 to 70 feet deep. We used skipjack for bait and caught 7 fish total on tournament day.”

Cress and Crone caught all their fish by 11 am. They debated staying out and trying to upgrade their 14-pound under but decided not to push their luck in case the ramp was busy. They were among some of the early boats to weigh.

Third Place
Scott Mathis, Jeff Kirkpatrick, and James Hemby have fished the MRM every year since it started. They are familiar with the river and did not pre-fish. They brought a 3-fish limit of 121.95 pounds to the scales to claim the third-place spot.

“The  Weather was nice and sunny with a little southeast wind,” Hemby said. “We only fished about three hours because we had a fish struggling early. We were the third boat to weigh in after fishing about 2 hours north of Memphis.”

Considering they had a struggling fish they wanted to take care of, the team decided to carry the fish to the weigh-in by boat so they could have circulating water and oxygen. They prepared the boat for the long ride back and headed for weigh-in.

“We carried extra gas and boated the fish back to the marina near the Bass Pro Pyramid,” explained Kirkpatrick. “We took extra weight out of the boat and put it in the truck to be driven back. We met the truck and loaded up at the marina and then on to the Pyramid.”

“We started heading to the ramp around 10:00,” added Hemby. “We made several stops as we took our time and continued to check on our fish and circulate water.”

Their struggling fish was about 60 pounds. It bit on a whole skipjack that they cut the tail off of. The team targeted water in the 55- to 65-foot range. Like many other successful anglers, they were bumping to catch their winning bag. They caught 4 fish on the day.

“We slowed our boat to a controllable speed,” explained Hemby. “We were moving anywhere from ½ mph to 2.0 mph.”

“We probably could have bettered our weight if we fished longer,” Kirkpatrick said. “But we decided to take care of the fish we had.”

“We give credit to our lord in just making it our day and putting us in the right place at the right time,” concluded Hemby. 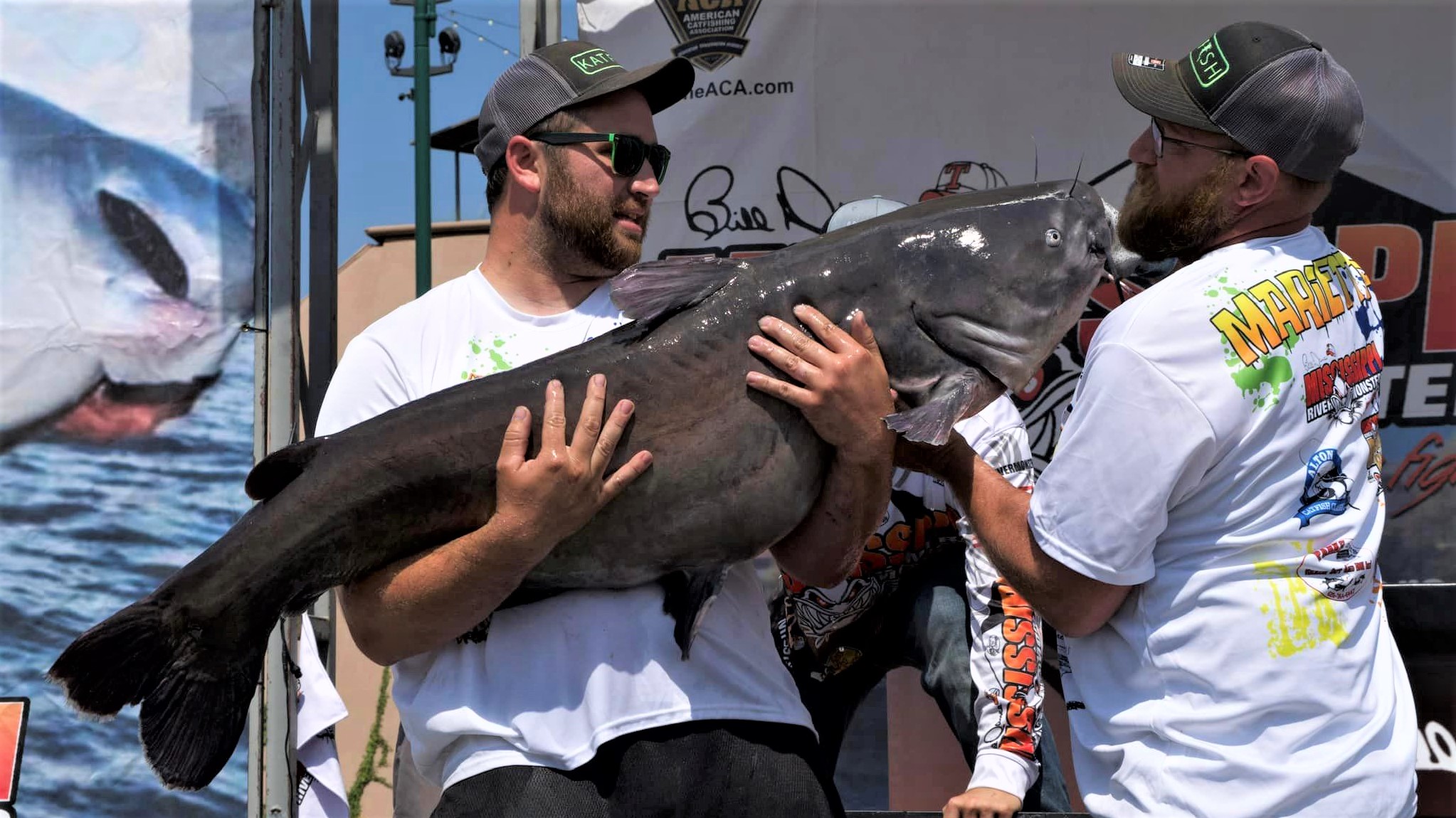 The MRM Big Fish Award went to Team Puddle Jumper (Thomas Dollens and Kelly Marietta). They teamed up to bring 104.55 pounds to the scales and finish in 9th place overall. Their bag included the Big Fish of the tournament at 78.55 pounds and it was Marietta’s personal best blue cat.

“Our game plan for the day was to do some bumping along with some dead sticking,” reported Dollens. “We got our trolling motor in the water, got our dead sticks set, and went to bumping using skipjack for bait.”

About 20 minutes into their first drift they caught a small blue. Shortly after 7:30 am Marietta hooked into the 78-pound blue that won Big Fish and gave Marietta a new personal best.

“We’d like to give a shoutout and huge thank you to everyone who sponsored and supported us,” concluded Dollens. “They include KD Equine Services (my wife), River Rat Reel Repair, and Magic Tackle. We would also like to thank SmackDown Catfishing, Partners In Slime, and Parks Planers for allowing us to put their logos on our jerseys. Finally, a special thank you to our spouses, Kenady Dollens and Cindy Stafford, who do a lot behind the scenes for us.”

Note: A complete description of how they caught the big blue includes a story about a mystery frog. You can read it soon on CatfishNOW in the Whisker Whacker Column. 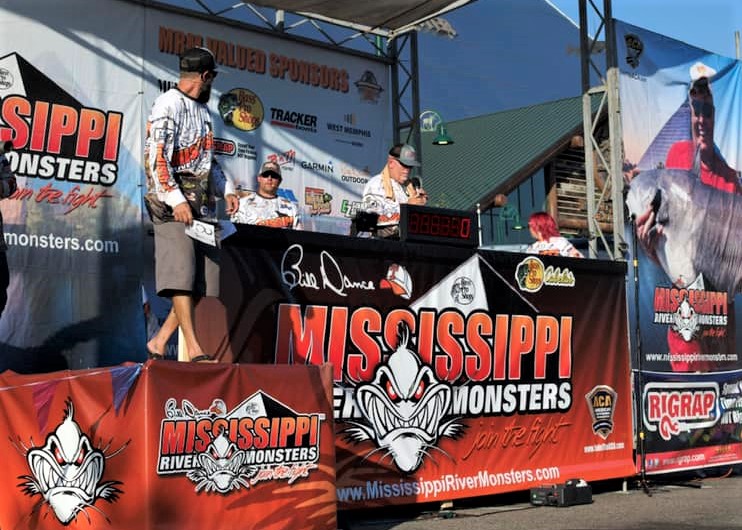 Mississippi River Monsters also had the Monster Week Big Fish competition on Wednesday and Thursday. The Wednesday winners were Joe Hardy and Fonzie Malaikham. They caught a 70.40-pound blue to earn a $500 check from Grizzley Jigs.

The Thursday Big Fish competition was sponsored by B’n’M Poles and won by Team Power Catfish ( J.T. Ray and Dustin Sipes) with a nice 64.60-pound blue. They earned a check from B’n’M Poles for $500.

The No Weight drawing went to Team Cat’n Aroun’ with David Magness, Kurtis Bramlett, and Monte Belew. The prize was a Driftmaster Rod Rack complete with Rod Holders and a check for $400.

For seven years in a row, the Mississippi River Monsters have raffled off a Tracker Boat. In this year’s giveaway the boat, valued at more than $30,000 went to Steve Hern, Josh Patterson, and Chris Wilson.

In a showing of the catfish communities generosity an auction was held on Thursday night to benefit young Marley Wilbanks. Marley’s mom and tournament angler, Natalie Wilbanks was on hand to receive $20,600 that was raised at the Big Bash Auction to help with Marley’s medical expenses.

Chris and Cory Ramsey, and Jessie Adams were joined on stage by Michael Steele to make the weigh-in go smooth for the anglers and to entertain the spectators. A huge crew of volunteers was on hand to contribute to the effort and help make the Mississippi River Monsters event one of the most anticipated tournaments in the county. Originator and tournament director, George Young Jr. can be proud of another awesome event.