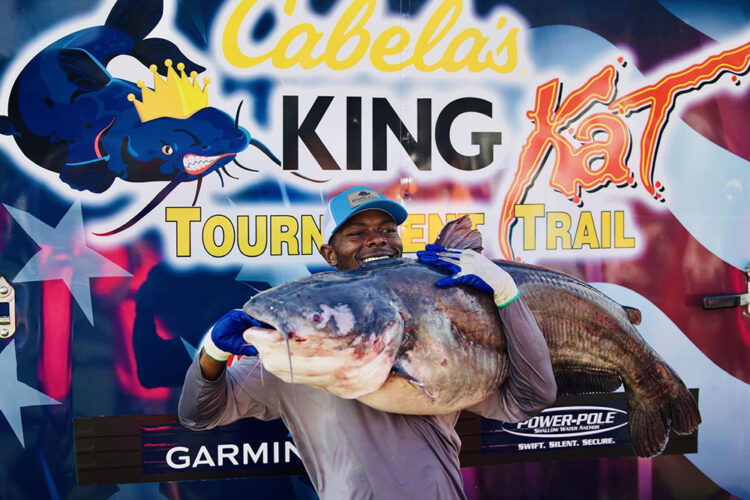 The Bass Pro Shops/Cabela’s KingKat Tournament Trail traveled to Eutawville, SC, for a competition on Santee Cooper. The lakes of Marion and Moultrie are big fish destinations and favorites among the catfishing crowd.

Twenty-eight teams competed for a 100% pluse purse that totaled more than $11,000 in the September 10th, 2022 event. The weigh-in took place at Black’s Camp and Restaurant where it took a three-fish weight of nearly 150 pounds to win.

The weigh-in stage was managed by Grant while Lisa Gail Haraway and other KingKat team members handled the various other duties required for a smooth and efficient weigh-in.

First Place honors went to Thomas J Walker Jr and Dee Young. They brought a total weight of 147.59 pounds to the scales to claim the top spot. Their bag included Young’s personal best blue at 75.53 pounds which was awarded Big Kat of the tournament. 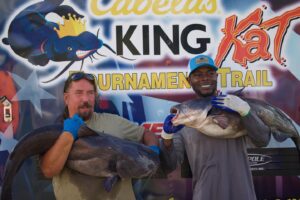 Walker and Young are very familiar with Santee Cooper as regular competitors on the lakes. They used a variety of bait and is often the case they had to deal with varying weather conditions.

“We started the morning working our way down the lake in rough water,” recalled Walker. “We began drifting a designated area where we had been marking big fish.”

Under windy conditions, they deployed two 10-foot Easterlin Drift Socks to slow down their drift. Within a few minutes, Young had hooked up with the 75.57-pound blue that would be his personal best and Big Kat of the tournament.

“It was a great fight,” declared Walker. “The big fish bit on a bream that was caught a few days earlier. We had to dance around the storms that came blowing thru but then the lake laid down.”

Given the calmer winds, the team pulled the drift socks as they were not needed anymore. They continued to drag their fishing areas hoping to cull and improve their weight.

“We boated over 20 fish on the day,” reported Walker. “We just had a hard time gaining much weight in total. We did lose a good one at the boat around 2:45 pm. We were using gizzard shad, bream, and white perch. We had a blast!

“Finally we would like to thank a few folks,” concluded Walker. “Thanks to Rod Trees, Liberty Threads, Santee Drifters, Lake Hartwell Outdoor Center, and South Carolina for having one of the best fisheries in the country!” 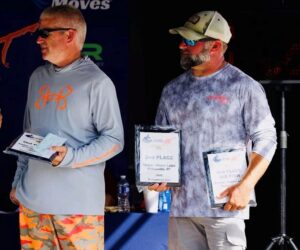 The runner-up spot went to Mark Ghent and Jason Leaphart (Team FlatN2thaBlues). They teamed up to bring a total weight of 126.18 pounds in their 3 weigh-in fish. Their bag included the Second Big Kat of the tournament at 58.55 pounds.

“We had a great time,” reported Ghent. “We caught a lot of big fish and broke off a real good fish around 10:00 am Saturday morning. We fished Marion, the upper lake. We were targeting mussel beds with 10- to 15-inch live perch.”

“Jason and I are glad to see Cabela’s KingKat working hard to keep catfishing growing as a sport for all,” concluded Ghent. “I mean families, kids, and veterans. Last but not least we want to thank CatfishNOW for spreading the word about the sport. It can only make it grow more.”

Billy Robertson, Josh Adams, and Dawson Jenkins made a last-minute decision to fish the KingKat tourney on Santee Cooper. It turned out to be the right decision. When the competition was over they pulled up to the scales with 106.68 pounds to claim the 3rd place spot.

In a Facebook post, Josh Adams thanked Scott Peavy and his cohorts on the KingKat staff for a smooth-running tournament. He also mentioned the MadKatz Rods, which he fished with, and Sutton’s Landing for providing great bait. Finally, he recognized Black’s Camp and Restaurant for being a great host.

Teammates, David Kingsmore and Wes Bowling put together a bag of 94.12 pounds to place in the money and take 4th place. Kingsmore and Bowling are regular competitors on the Santee Cooper lakes and members of the Santee Lakes Catfish Club.

The Tackle 22 Team of Anthony Brown and Steve Fortson were awarded the Top Veteran Award. They weighed in with 62.36 pounds to earn the award.

The Santee Cooper Lakes performed as expected. It is a big fish destination and it showed out again for the tournament. As the season progresses anglers are noticing the care and dedication going into the KingKat Tournament Trail by the new ownership.

“We had a successful KingKat Tournament this weekend at a Black’s Camp,” reported emcee and weighmaster Kevin “Stump” Grant. “The Santee Cooper Lakes produced the highest total weights and the highest winning weights that we’ve seen all season. Anglers fished the morning under fairly windy, cloudy, and rainy conditions that cleared throughout the day. The weigh-in showed a mixed bag of flatheads and blues.”

One fan in particular, Mark Coburn, weighmaster for the Santee Lakes Catfish Club, was on hand as a spectator.

“The weather on tournament day was a smorgasbord,” reported Coburn. “There were clouds, variable winds, and some areas of the lakes had scattered showers. Around noon, the sun shined brightly and temperatures rose quickly. The weather at weigh-in was perfect. A nice crowd gathered to enjoy the weigh-in and gave great accolades to the anglers. It was great to see the KingKat Tournament Trail return to Santee. A great time was had by all involved. It’s a new day at King Kat and the sky is bright!”

The next King Kat event is scheduled for September 14, 2022, at Cape Girardeau, MO on the Mississippi River.