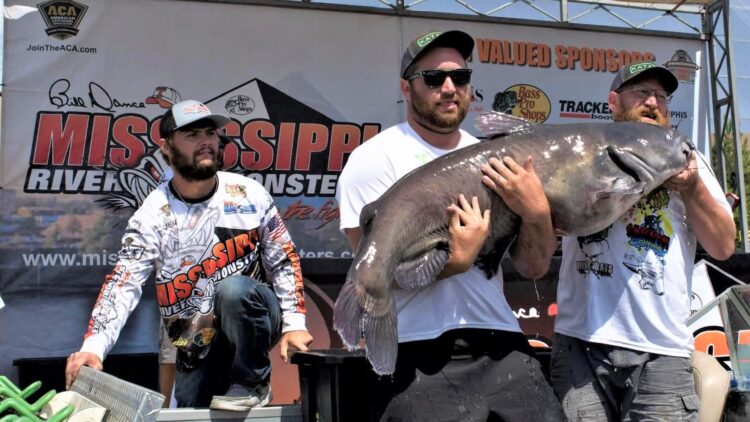 Big Fish honors at MRM went to team Puddle Jumper and they may have had help from a lucky frog.

The 2022 Mississippi River Monsters (MRM) tournament out of Memphis, showed off as usual with plenty of trophy catfish coming to the scales. Spectators at the September 17, 2022 event witnessed 4,774.20 pounds weighed on the stage at the Bass Pro Shops at the Pyramid before being released back into the Mississippi River.

Two hundred eighty anglers fished from 111 boats on the Mighty Mississippi River.  One of those boats in the Division 1 American Catfishing Association tournament was manned by Thomas Dollens and Kelly Marietta. They were the first boat to the scales and when the day was over Team Puddle Jumper had won the Big Fish Honors at MRM. 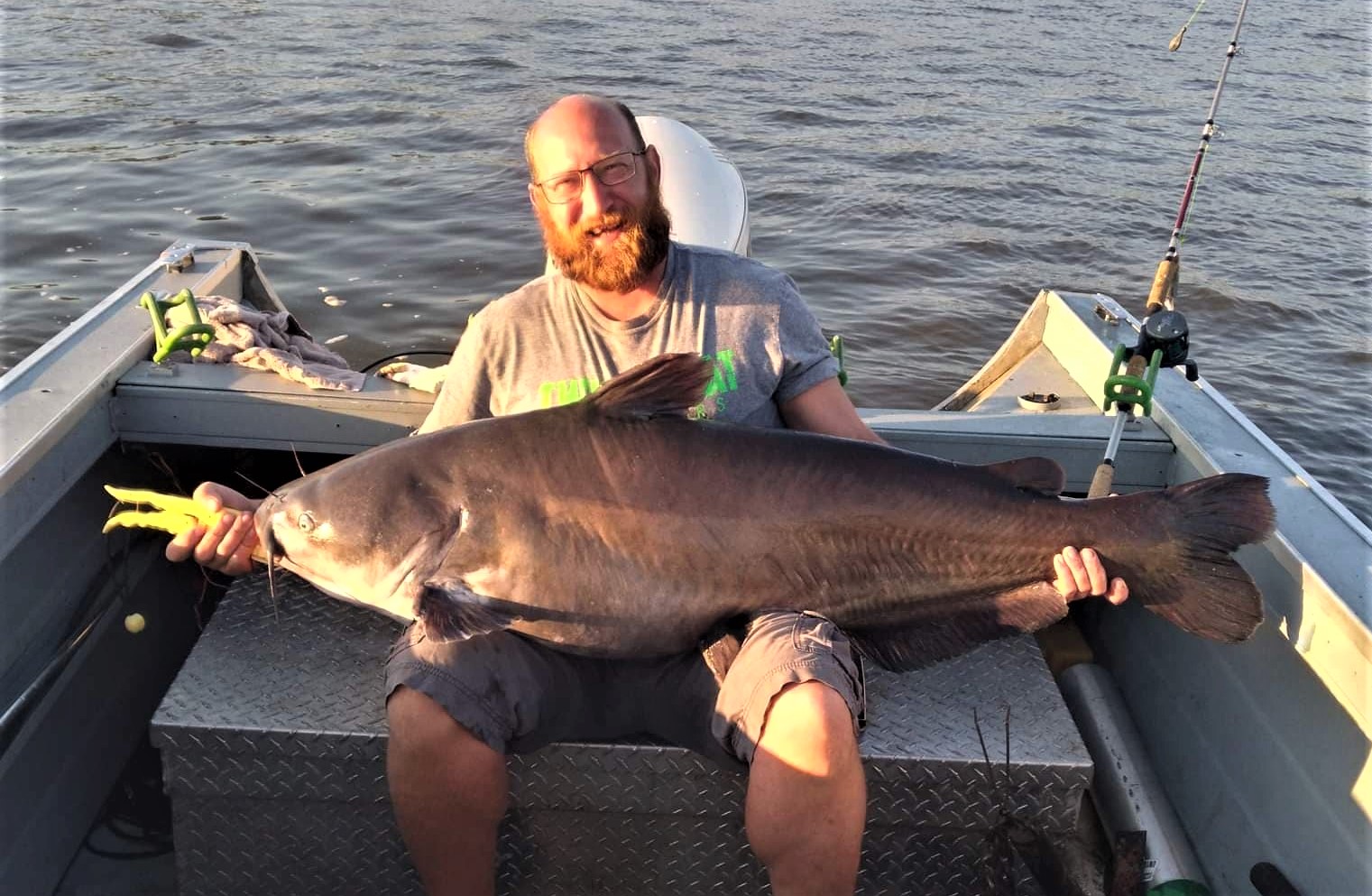 “Going into this tournament I was determined to turn our luck around,” stated a determined Marietta following the tournament. “We had a pretty good idea on areas we were going to fish.”

The morning of the tournament Team Puddle Jumper put in at the Helen, Arkansas Boat Ramp and headed to their first spot. They develop a game plan that included traditional bumping along with some dead stick rods out too.

“We didn’t end up getting to fish the first location,” reported Dollens. “There was a barge setting in the spot with no signs of moving. So instead of waiting, we headed to our second spot.”

“We got our trolling motor in the water, got our dead sticks set, and went to bumping,” added Dollens. “About 20 minutes into our drift we caught one of our smaller blues. Within an hour my partner Kelly hooked into the blue that won us Big Fish.”

They were fishing a spot that they found last year and checked again while prefishing for the 2022 event. They marked fish on a current seam in about 45 to 53 feet of water. The area had a rocky structure about 25 yards off the bank.

“We got to our second spot about 6:45 am,” recalled Marietta. “About 7:30 am I had the biggest catfish I ever caught in the boat. My new personal best (PB) weighed 78.55 pounds. My previous PB was 39 pounds. The hardest part of the fight was getting the fish off the bottom of the riverbed. It felt like it took forever to get the big fish in.”

“It took about 10 minutes between him reeling and me netting to get it in the boat,” explained Dollens. “Between the line staying straight down in the water and it ripping drag we knew we had a big one.”

“When it finally came up and hit the surface I looked at Kelly and told him to remain calm,” continued Dollens. “We needed to focus on getting this fish in the boat.”

When the skirmish was over and the fish in the boat, the team was ecstatic! Celebratory screaming and high-fiving could probably be heard for miles.

“We were beyond happy,” said Dollens. “It was a new PB for Kelly and one of the biggest blues we’d ever had in the boat.”

The team used a variety of cuts during the day and learned the fish did not seem to want the heads. So they concentrated on skipjack steaks that were producing for them. With 3 fish in the well, they caught their final cat around 10:45 am. At that point, they made a team decision in favor of good fish care.

“Kelly and I decided to call George Young to let him know we were heading back to the scales early,” explained Dollens. “With us having only a 60- to 65-gallon livewell, it was the best thing to do. The 3 fish together didn’t have much room and we were concerned about oxygen levels despite having an oxygen bottle. As nice as it would have been to continue fishing for another big one, I don’t think we could have fit another monster in there.”

Dollens and Marietta prepared the boat to travel and headed for the scales back at the Bass Pro Pyramid where they were the first team to weigh in.

“The rest of the day was nerve-racking,” admitted Dollens. “We had to sit  there watching the rest of the weigh-in not knowing if someone else would bring in a bigger fish.”

When their wait was over the news was good. Team Puddle Jumper finished in 9th place overall with a weight of 104 pounds and their bag included the 78.55-pound blue cat that gave them the Big Fish title.

“Kelly and I could not have asked for a better day,” concluded Dollens. “Team Puddle Jumpers is on cloud 9. We’d like to give a shoutout and huge thank you to everyone who sponsored and supported us. They include KD Equine Services (my wife), River Rat Reel Repair, and Magic Tackle. We would also like to thank SmackDown Catfishing, Partners In Slime, and Parks Planers for allowing us to put their logos on our jerseys. Finally, a special thank you to our spouses, Kenady Dollens and Cindy Stafford, who do a lot behind the scenes for us.”

Epilogue
Actually, there is more to the story as told by Dollens’s wife. She is convinced that a lucky frog she placed in the boat contributed to the team’s success.

The previous weekend Thomas and Kelly had fished the Alton Classic. They met a team that had a frog in their boat and joked that it was their good luck frog. 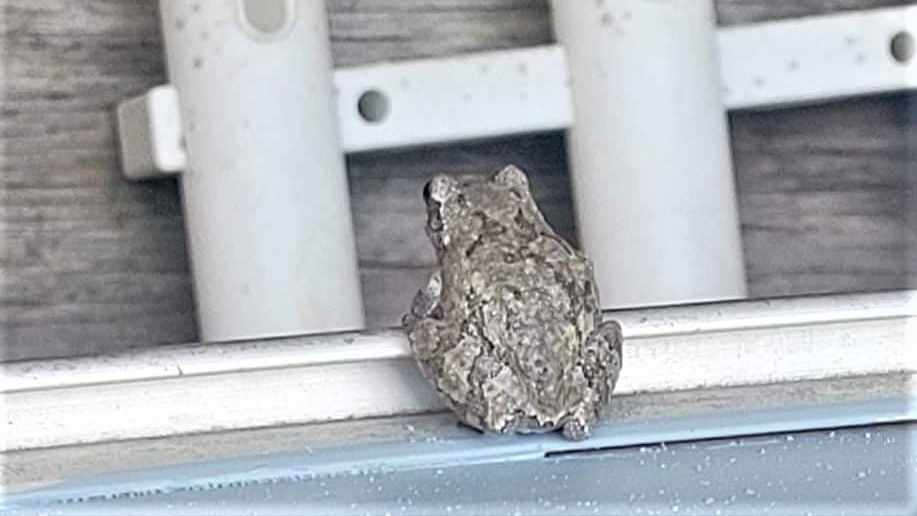 Then I said to him, “Watch, now y’all are gonna’ end up winning something because I sent you off with the lucky frog.”

That was pretty well the end of the conversation about the frog until Thomas called me Saturday afternoon all excited about the 78-pound blue they had in the boat. Then after the weigh-in, he called to tell me they had won Big Fish and placed in the money.

That’s when I reminded them that I had put the lucky tree frog in the boat.

Thomas laughed at me when I said, “I deserved some credit for the win. Y’all did well because I put that little frog in the boat the night before you left.” Overall it’s just kinda cool the way everything worked out with them winning Big Fish and placing 9th at such a big event, after putting the frog in the boat.

Editor’s Note: It is still a mystery as to whether or not the lucky frog is still in the boat but it is rumored that Dollens and Marietta have been seen catching flies back in Mexico Missouri. I’m just guessing that there is likely to be a lucky frog in the boat when they launch out of Helena, Arkansas for the Mega Bucs event in October. They have already invested in a larger livewell.