KingKat on the Mississippi River at Cape Girardeau, MO—How They Fished 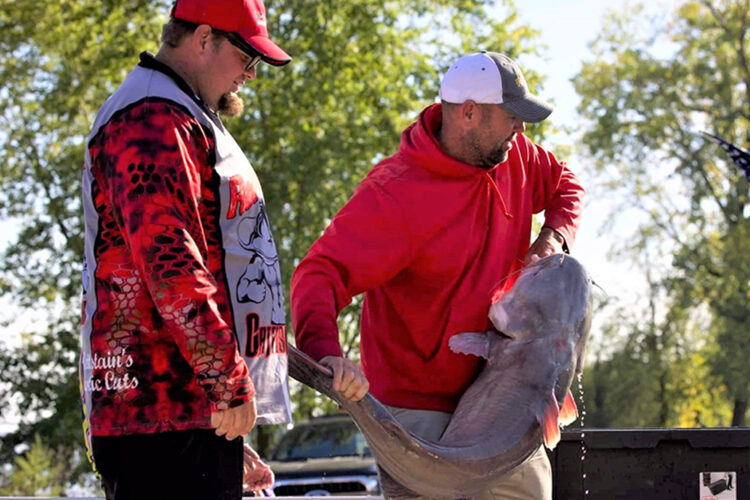 Low water levels caused a change in fishable waters for this event. Anglers could compete from the RT 51 Bridge south to the New Madrid Dorena Boat Ramp. Trailering was allowed at any ramp within those boundaries. The Ohio River was OFF LIMITS for this tournament.

Teams representing 11 different states competed for a purse that totaled more than $10,000 in the September 24th, 2022 event. The weigh-in took place at the Red Star Access on 2nd Street where it took a three-fish weight of nearly 150 pounds to win.

The stage duties were performed by Kevin “Stump” Grant (Weighmaster) and Travis Justice (Co-Host). Lisa Gail Haraway and Arianna Malcolm took care of the fish while Alicia Banks, Scott Peevy, and other KingKat team members handled the various other duties required for a smooth and efficient weigh-in. 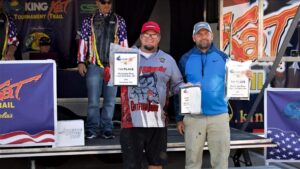 First Place honors went to Damian Clark and Tom Petroski. They put together a strategy that resulted in 147.37 pounds to claim the top spot. Their bag included the Second Big Kat at 60.50 pounds. They earned the first place check of $4,000 and added $500 for Second Big Kat.

“I had the honor of fishing with one of the best fishermen in the country,” noted Clark following the tournament. “On Friday we prefished without catching a fish so we learned what not to do.”

Their prefishing experience did not dampen their optimism. When Saturday morning came they were prepared to fish in a different area where they bumped all day in hard and fast water.

“The wind was a little rough first thing in the morning,” reported Clark. “The river was lower than we have ever seen it. We just fished hard and kept the bait in the water. We boated several quality fish with our biggest being 60 pounds and our second biggest being around 52 pounds. The last fish of the day came in at about 36 pounds. We used skip jack for bait.” 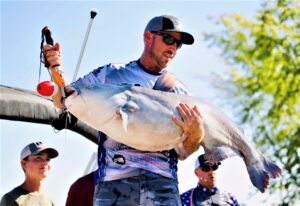 The runner-up spot went to Gregg Staggs, Gabe Staggs, and Justin Borgfield. The team brought 94.44 pounds to the scales to take the second-place spot. They added to their success by bringing in the Big Kat of the tournament at 65.36 pounds. They earned a second-place check of $2,350 and added $1,000 for Big Kat.

The team targeted a couple of spots where they found fish holding earlier in the week. They bumped all day using skipjack and caught three fish right off the bat. Fifteen-year-old Gabe Staggs caught the first fish of the day about five minutes in. But after that early flurry things went cold.

“It was another hour before we caught another fish,” recalled Greg Staggs. “Even more time ticked off the clock before we caught our last one from that spot. It seemed as if the big ones had moved out as all the fish we caught were around the 20-pound mark and under.”

The team moved to another area where they had found success before. About halfway through the first drift, the drag screamed and the line peeled from Justin’s reel with what would be his new personal best blue.

“Justin hooked up and the fish fought hard,” explained Staggs. “It made one last huge surge boat side before we got the 65-pounder in the net.”

The team fished water that ranged in depth from 25 to 45 feet deep. They reported having a lot of “short bites” on the day. Everyone in the boat had fish hit that did not hook up.

“I’d like to thank Justin Borgfield for being the friend and mentor he is to us,” concluded Greg Staggs. “It was an honor to be there as he hauled in his new personal best after all he’s poured into us.”

Mike Mitchell teamed up with local angler Jimmy Burton to claim the third place spot. The team weighed a 3-fish limit of 93.70 pounds to earn a check for $1,650.

Mitchell and New Madrid angler Burton prefished the New Madrid area on Friday. Not finding what they were looking for, they decided to go further north on tournament day.

“Weather was partly cloudy and windy,” reported Mitchell. “The water was extremely low and there were very few boat ramps to choose from. We bumped in 35 to 45 feet of water using cut skipjack for bait. We caught 10 fish on the day with most of them coming in the first 2 hours.”

Travis Hunter and Jeremy Ransom took home the 4th place money with a bag that weighed 84.02 pounds. The B’n’M Poles team earned a check for $1,000.

“We were expecting the low water conditions to play a huge role,” reported Hunter following the event. “So we graphed A LOT of the deepest water we could find. We fished a couple of different spots on tournament day.”

Hunter and Ransom anchored and walked baits early in the tournament. Discovering that the fish were scattered they switched to bumping revetment about noon. This allowed them to cover a lot more ground. Their fish came from water that ranged from 40 to 80 feet deep. They caught 8 fish on the day.

“We would like to thank B’n’M Poles for their support,” concluded Hunter. “ I’d also like to thank the Cabela’s KingKat crew for all their hard work putting on the tournament. I’ve never seen a more inviting, polite, and professional tournament crew than what I saw the last couple of days.”

“The Mississippi River performed well for the KingKat event,” reported KingKat Weighmaster, Kevin “Stump” Grant. “More than 50 anglers fished extremely low water conditions on the Mississippi River. Sunny, windy, and warm temperatures characterized the tourney. We were still able to produce some nice stringers of fish despite the conditions.”

The next KingKat event is scheduled for October 1, 2022, at Kansas City, MO on the Missouri River.